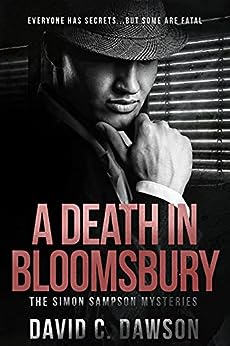 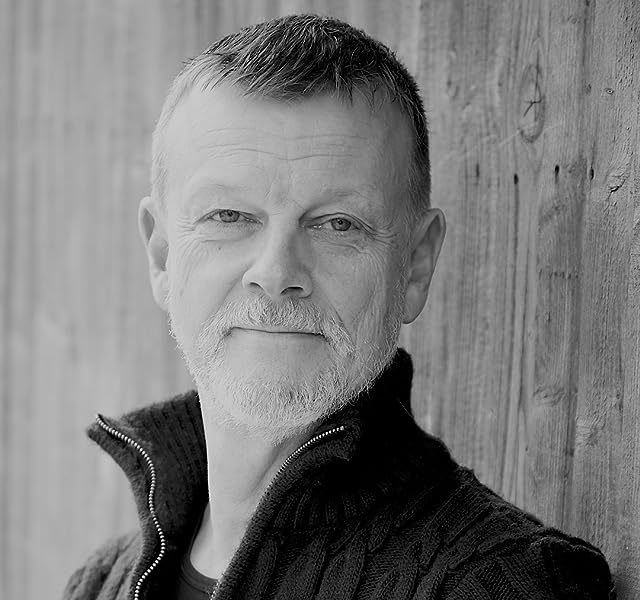 by David C Dawson (Author) Format: Kindle Edition
See all formats and editions
Sorry, there was a problem loading this page. Try again.
Everyone has secrets… but some are fatal.

1932, London. Late one December night Simon Sampson stumbles across the body of a woman in an alleyway. Her death is linked to a plot by right-wing extremists to assassinate the King on Christmas Day. Simon resolves to do his patriotic duty and unmask the traitors.
But Simon Sampson lives a double life. Not only is he a highly respected BBC radio announcer, but he’s also a man who loves men, and as such must live a secret life. His investigation risks revealing his other life and with that imprisonment under Britain’s draconian homophobic laws of the time. He faces a stark choice: his loyalty to the King or his freedom.

This is the first in a new series from award-winning author David C. Dawson. A richly atmospheric novel set in the shadowy world of 1930s London, where secrets are commonplace, and no one is quite who they seem.
Read more
Previous page
Next page

His latest book A Death in Bloomsbury was published in November 2021.

His first novel: The Necessary Deaths, won an FAPA award in the best suspense/thriller category. It's the first of three books in the Delingpole Mysteries series.

David has also written two gay romances: For the Love of Luke and Heroes in Love.

David lives in London, with his boyfriend and two cats. In his spare time, he tours Europe and sings with the London Gay Men's Chorus.

Linda A
3.0 out of 5 stars Simon and Cameron
Reviewed in Australia on 10 November 2021
I have read several books by this author.
There is always a murder or three and plenty of sleuthing.

The murder of an unidentified woman in a back street alley was always going to be a problem to solve but luckily Simon, a BBC radio news reader and former Chronicle crime writer, had plenty of friends in prominent places to help him. The clues were obscure for the most part but once Simon and Cameron, a newly appointed footman at the Palace, joined forces, they quickly start putting the pieces together.
With the help of Bill, Anna and Robbie they begin to get a clear picture of a plot to kill the King. Simon is determined to stop it.

The murder mystery is the main focus of the book. There are no adult scenes just a few kisses.

I received this book from GRR. This is my honest review.

Beezie Reads Romance
TOP 500 REVIEWER
4.0 out of 5 stars Noir style crime thriller
Reviewed in Australia on 10 November 2021
Excellent 1930's noir style mystery with queer MC's. The focus is strongly on the mystery, so it's not a romance. Do not come into this expectating Simon to get his HEA.

The MC's (Simon and his begrudging but loyal friend Bill) are well defined and engaging. They don't really go through any major character growth, but as the focus is on the mystery plot, I could forgive this.

If you're looking for a cheeky noir story set in London with lots of name dropping and a fun twist on history, look no further.

I received a copy of this book from Gay Romance Reviews and I have chosen to leave an honest review.
Read more
Helpful
Report abuse
See all reviews

RF
4.0 out of 5 stars An intriguing historical mystery
Reviewed in the United Kingdom on 11 November 2021
Verified Purchase
This was a very good mystery that had me gripped, constantly guessing and second guessing everyone's motivations and intentions! Simon is an excellent narrator for a mystery as he combines likeability, charm, nosiness, and just the right amount of naivety to get involved in everything.

The portrayal of the time period was a charm: there was the feeling of impending tragedy through the references to the political situation, both in England and overseas; and also the establishment of the queer community was done well. It's probably a but YMMV about the use of name dropping, personally I quite enjoyed it, especially from my true heroine, Bill.

mak
5.0 out of 5 stars SUSPENSEFUL & A THRILLER
Reviewed in the United States on 11 November 2021
Verified Purchase
“A Death in Bloomsbury” is the beginning of a new series “The Simon Sampson Mysteries” by David C. Dawson. The writing is excellent and I commend Mr. Dawson for not americanizing his story. He truly brings out the flavor from: British, Scottish and cockney accents and phrases, such as: “old thing” and “just so”.

Simon Sampson was an investigated reporter for The Chronicle and was know for his column titled “Sleuth”. Thinking the BBC would be more lucrative, he took a job as a news announcer with promise of a reporter position. But the government prevented the BBC from competing with the newspapers and his dream of being a reporter faded.

At the Fitzroy Tavern Simon relates his strange story of the night to: Johnny the barman, his very good friend, Florence Miles aka Bill and makes a new friend in twenty-one year old Cameron McCreadie from Scotland. Cameron is new to the London area and has a position working at St. James Palace.

Simon had found a women in an alley and when he returned with a constable the women had disappeared. Of course, the constable was no help at all. It seemed like he didn’t care or even believe an ounce of Simon’s story. Simon has some evidence that he shows, particularly too Cameron: a unique, metal button and an expensive, small clutch bag. Cameron gives his opinion about the objects that Simon discovered. As Cameron encourages Simon they venture back to the alley. With Cameron’s help and his torch they discover a brown sealed envelope. What they discover in the envelope and another tragic connection to Simon, he has no idea who to trust. He knows for sure that he has to protect his friends and himself. For Simon his situation becomes more confusing and complicated and he has no choice but to go on the run.

I like this new character, Simon Sampson he is a man of integrity, morality, and honesty. He believes in what is true and right. He yearns that one day he would be able to to be himself and have the freedom and right to love who he want’s too. He understands the consequences of the homophobic laws for men.

Florence Miles aka Bill is an important character in this story. She has been like a best friend to Simon. She is very opinionated and outspoken about women’s situations in a world dominated by men. In fact, she has Simon curious about sapphic relationships between women and he want’s to learn more about their plight. As much as I liked her flamboyant type character, I grew suspicious of her.

Because of Bills part in this story there’s many famous tid-bits about: Oscar Wilde, Marlena Dietrich and especially Noel Coward. As much of the story takes place at Noel Cowards home Goldenhurst in Aldington.

The story also takes place during a dangerous era as Adolf Hitler is planning to move his Nazi Party into power.

I got to read a sample of the first chapter many months ago and I’m delighted how this novel developed. It’s a suspenseful thriller, fast-paced action, with danger, corruption, murder, espionage, sadness and humor. I also love the cover it sets the tone for this thriller! This is already on my top favorite mysteries for sure! Excited to hear, David C. Dawson has a second and third book already in the works!
Read more
2 people found this helpful
Report abuse

SandyB
5.0 out of 5 stars Intriguing and suspenseful historical mystery
Reviewed in the United States on 11 November 2021
Verified Purchase
David Dawson’s mysteries always make me want to grab a thesaurus because I can never think of enough superlatives to heap upon them. This, the first in a new series, is no different. Set in 1930s England, it has everything I expect from his books - intricate puzzles, well-rounded characters, a fantastic sense of place and time, and storylines that kept me engrossed to the point of ignoring silly stuff like dinner and deadlines. Simon, Bill, and all their connections (including Noel Coward’s car) provide humor, intrigue, and even a few emotions.

Definitely a one-sitting read, it’s a strong start to a new series. I cannot recommend it highly enough and really hope the next one shows up sooner rather than later.
Read more
2 people found this helpful
Report abuse

Garrett Hutson
3.0 out of 5 stars An exciting plot, but not really engaging
Reviewed in the United States on 7 January 2022
Verified Purchase
This book had an exciting story--a fascist plot to kill the king--and the historical setting of 1932 England was described vividly. There were some good twists that kept things interesting. The author also did a good job describing the peculiarities and restrictions of living as a closeted gay man in London, and the conflicts and uncomfortable situations that can lead to (not to mention the danger of discovery and imprisonment).

But I felt that the writing wasn't as good as I'd hoped. There was too much "As you know, Bob..." dialogue early in the story (some of it eye-roll worthy) that strained credulity, and the author did a lot of telling us how Simon feels throughout, rather than letting us feel emotions alongside Simon. There was also too much phonetic spelling of dialects, particularly Cameron's Scots dialect (a little goes a long way here). There was a lot of description of the gay scene in London in 1932, which was interesting, but wasn't always relevant to the progression of the story (for example, we don't need a full list of all the nearby gay bars if no one in the scene is visiting them).

One glaring anachronism fans of historical spy fiction will notice is the regularity of Simon using the name "MI6." No one outside of MI6 itself would have even known that name prior to the 1960s, as it was one of the best-kept secrets in all of international intelligence.

An enjoyable story, but I'm not sure I would continue with the series. I never felt engaged with the protagonist, and so I don't really care what happens to him next.
Read more
Report abuse

Texan2
5.0 out of 5 stars Amazing
Reviewed in the United States on 3 December 2021
Verified Purchase
My first time to read something by this author, but it won't be the last. This was a very taut mystery, with fully realized characters. The period is fascinating and well developed.
Read more
One person found this helpful
Report abuse
See all reviews
Back to top
Get to Know Us
Make Money with Us
Let Us Help You
And don't forget:
© 1996-2022, Amazon.com, Inc. or its affiliates