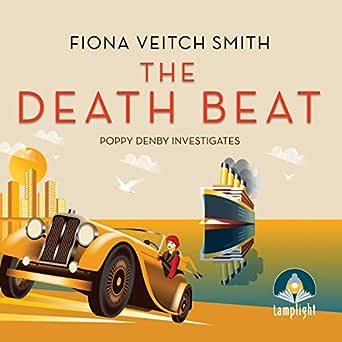 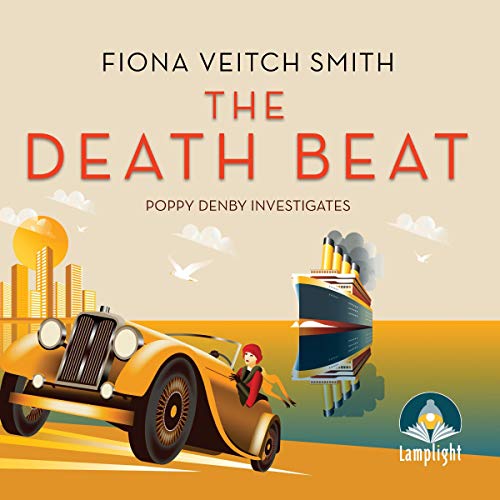 Sheila
5.0 out of 5 stars Engaging and sparkling story
Reviewed in the United Kingdom on 3 December 2020
Verified Purchase
I loved this, the third in the Poppy Denby Investigates series, set in the 1920s and early 1930s. This time, investigative journalist Poppy is in New York with her boss, Rollo, having travelled from London accompanied by her good friend, actress Delilah, and her aunt, former suffragette Dot.

She finds herself unravelling a case involving a murder, stolen identity, false claim on a fortune, a possible sex-slave ring, corruption in the film industry, two vulnerable female emigrees from the Russian revolution, and the mystery of who pushed the seaman into the machinery on the ship from Southampton. We meet again the villain Archie Dorchester from Poppy Denby's past.

I love the sparkling narrative pace, the colourful evocation of the era, the accurate description of the fashions of the time, the way the author blends in real people, and above all the delightful and engaging principal characters. Now I move straight on to the next Poppy Denby book!
Read more
Report abuse

Paul T.
5.0 out of 5 stars Murder and Mystery in 1920's New York
Reviewed in the United Kingdom on 12 November 2017
Verified Purchase
All good historical novels mix their storytelling with interesting insights into a past time and way of life. The third in this series gives us a chance to see New York in the 1920's and the view may be surprising. We may be aware of the energy and innovation, we might have heard of prohibition and the Speakeasy's, and many people will know about Ellis Island and the flood of immigrants that entered the USA through it's gates. But how many knew about the attitudes that many had towards immigration? Or the conditions many immigrants faced? The parallels with modern issues are not emphasised - they don't have to be, they're all too obvious.

But this isn't a social commentary, it's a mystery and and adventure - and it certainly delivers on that, as Poppy Denby unravels a dark and complex story of murder and exploitation.

The historical background adds interest and authenticity, but it's Poppy's own character that drives the plot.
Read more
One person found this helpful
Report abuse

Hilary Forbes
5.0 out of 5 stars Another excellent and enjoyable read
Reviewed in the United Kingdom on 20 January 2018
Verified Purchase
This is another great read in the Poppy Denby series. A really refreshing read, poignant and thought provoking too, for many and various reasons, such as the harrowing circumstances of those fleeing from cruel regimes to safer places. Yet filled with unyielding hope, kindness and compassion Poppy Denby shows that it is possible to change and influence the outcomes positively for those who have little or no voice or influence of their own. However this is not a preachy book, it is set in a context of gritty reality, showing the contrast of the very privilaged in the midst of those who are not. It is disturbing at times, but it is, above all, an excellent and unputdownable read. I am very much looking forward to and hoping there will be a book 4 in this series.
Read more
One person found this helpful
Report abuse

E.Watkins
5.0 out of 5 stars Poppy in New York
Reviewed in the United Kingdom on 7 December 2017
Verified Purchase
In this third story in the series, Poppy Denby is off again on another fast-moving, rip-roaring adventure, this time to the Big Apple, with her friends Rollo and Delilah. Poppy enjoys the experience of a luxury first-class journey, but once in New York is soon off on the trail of a mysterious death. Poppy's investigations take her from the luxurious mansions of the mega-rich to the notorious Speakeasies and the Garment area where desperate immigrants, some illegal, are in danger of exploitation. Along with Poppy's story we have the parallel one of two Jewish immigrant girls, whose paths cross Poppy's in unexpected ways. We get fascinating glimpses of the way immigrants were dealt with at Ellis Island, and the dangers, hardships and humiliations they faced. The story gathers pace until the final dramatic and shocking ending. Poppy aquires some very fetching new outfits along the way, I love the descriptions of her and Delilah's fashionable 20s dresses!
Read more
Report abuse

tandg
5.0 out of 5 stars Very enjoyable read
Reviewed in the United Kingdom on 30 November 2017
Verified Purchase
The intrepid Poppy Denby is definitely into her stride in this third book! Having read the previous two - Jazz Files and Kill Fee - I was familiar with some of the characters, although their trans-Atlantic voyage and temporary relocation bring a whole new range of challenges, with new relationships to explore and unexpected dangers. While this book doesn't shy away from the serious issues of the day, such as the exploitation of immigrants, especially women, I never found it at all heavy - in fact, it was a very enjoyable read. Hard to put down, as my ironing pile will testify...
Read more
Report abuse
See all reviews
Back to top
Get to Know Us
Make Money with Us
Let Us Help You
And don't forget:
© 1996-2021, Amazon.com, Inc. or its affiliates