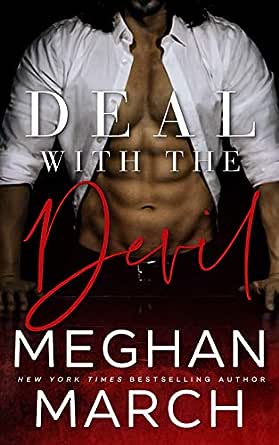 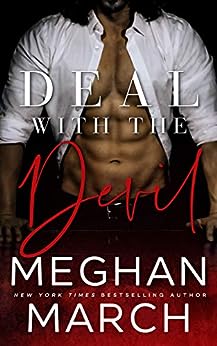 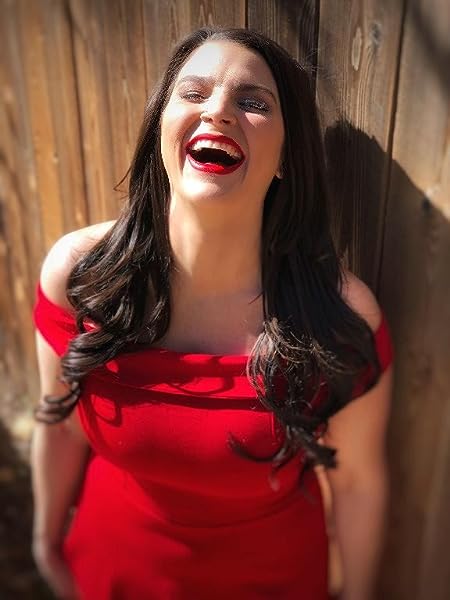 Meghan March has been known to wear camo face paint and tromp around in woods wearing mud-covered boots, all while sporting a perfect manicure. She's also impulsive, easily entertained, and absolutely unapologetic about the fact that she loves to read and write smut. Her past lives include slinging auto parts, selling lingerie, making custom jewelry, and practicing corporate law. Writing books about dirty talking alpha males and the strong, sassy women who bring them to their knees is by far the most fabulous job she's ever had. She loves hearing from her readers at meghanmarchbooks@gmail.com.

4.7 out of 5 stars
4.7 out of 5
894 global ratings
How are ratings calculated?
To calculate the overall star rating and percentage breakdown by star, we don’t use a simple average. Instead, our system considers things like how recent a review is and if the reviewer bought the item on Amazon. It also analyses reviews to verify trustworthiness.

Kelly
TOP 50 REVIEWER
4.0 out of 5 stars Bring on Book 2!!
Reviewed in Australia on 15 January 2019
Verified Purchase
Definitely interesting circumstances that has Indy and Forge meeting - Indy is desperate, whilst Forge is basically flexing his power, no-one can keep him away from where he wants to be. The on-going power play between these 2 continues throughout the book, it's a real battle of wills.

The expected cliffy had me wanting more - what is going to happen next, and what exactly are all of Forge's plans?? Not a lot of the reasoning behind Forge's decisions making was given away in Deal with the Devil, so hopefully we learn so much more about his plans in book 2. Can't wait for it!
Read more
2 people found this helpful
Helpful
Report abuse

Pebbles
TOP 500 REVIEWER
3.0 out of 5 stars First two were great, then... blah!
Reviewed in Australia on 24 April 2019
Verified Purchase
My rating is for ALL 3 books. The first two are definite 4 star reads. They are fast paced, well written and will have you on the edge eager to devour every word. Forge and Indy are an intensive and perfect couple UNTIL the third book. I don't know what the author was thinking here, it was a ridiculous excuse for conflict or maybe not but it wasn't written well. Indy and Forge turned into whiny, sniffling and pathetic characters. It totally ruined this Trilogy for me as I was skimming just to get to the end and then the card game was a non-event. SO DISAPPOINTED. :(
Read more
2 people found this helpful
Helpful
Report abuse

Jaime
5.0 out of 5 stars Absolutely Fantastic
Reviewed in Australia on 15 January 2019
Verified Purchase
Already can’t wait for the next book. I love Jericho and Indy so much already, words just can’t even describe how much I loved this book. Would recommend this to anyone who loves a good love story with a sexy af alpha man and an intelligent independent smart mouthed woman. I wish I could give it more stars.
Read more
2 people found this helpful
Helpful
Report abuse

Shelley
TOP 50 REVIEWER
5.0 out of 5 stars Ten stars 🌟
Reviewed in Australia on 15 January 2019
Verified Purchase
OMG, my world has just been rocked! I thought I’d seen it all but Jericho and India are officially my new favourite couple. Forge is a billionaire shipping magnate and after forcing his way into a high stakes poker game with other whales, he meets India and is instantly drawn to her! India is desperate and needs to win this poker game but she didn’t count on Forge joining the game and she doesn’t count on his competitive nature either.

What a story and that cliffhanger, oh man I don’t know if I can wait until next month for the next one, it’s going to be the hardest thing ever😍
Read more
One person found this helpful
Helpful
Report abuse

jacqueline
5.0 out of 5 stars Could not put it down!
Reviewed in Australia on 6 February 2019
Verified Purchase
Wow. This is very different to what I thought the story was going to be. The scene, the characters were all unexpected.
I cannot wait for the rest of the books to be released.
This is the first Meghan March book I have read and I am excited to read more of her stories!
Read more
One person found this helpful
Helpful
Report abuse

Brenda Hawkins
TOP 1000 REVIEWER
5.0 out of 5 stars addicted once more
Reviewed in Australia on 20 January 2019
Verified Purchase
Wow love it, then realised it was only the beginning.I have a new addiction and its called Jericho Forge. Thank you Ms March, for once again thrilling me with another new Alpha male to become fixed on. I am still getting over Lachlan Mount. Cant wait for the paperback so I can hold this bloody book and devour it once more and become lost in the world that Meghan creates and lets us n to.
Read more
One person found this helpful
Helpful
Report abuse

Melanie Hoffman
5.0 out of 5 stars Loved it.. i need more
Reviewed in Australia on 30 April 2019
Verified Purchase
This is the first series i have read of Meghan March and i am blown away. I have now found another must read Author.

Lets just say i binged this book I could not put it down. I'm very happy i waited until the series was complete before starting.

If you start this book at night. You will not put it down once you start. Be prepared for lots of coffee to get through the next day
Read more
Helpful
Report abuse

Cas
TOP 1000 REVIEWER
5.0 out of 5 stars Wow
Reviewed in Australia on 25 April 2019
Verified Purchase
I waited for the whole series to come out before reading this series. So glad I did, I would have been pulling my hair out waiting for the next book in the series if I hadn’t. Just loved how they show each other how to love. An interfering father. Non loyal staff members and a revenge that didn’t need to be. Actioned packed.
Narration was awesome too.
Read more
Helpful
Report abuse
See all reviews

Kindle Customer
2.0 out of 5 stars Definitely an introduction...
Reviewed in the United Kingdom on 20 January 2019
Verified Purchase
I have read several of Meghan March's books but found this frustratingly short and shallow. Unsure if my opinion will change after reading the next two books. This definitely reads like an introduction to the series rather than a complete book. To short for any real depth and I didn't connect with the characters at all. However I have loved her other books so am willing to continue on and have pre-ordered the next book which isn't exactly cheap. Male lead is a bit out there in characterisation, revenge focused but bawled over by the female lead due to her skill, tenacity and of course stunning looks. Not sure I buy their chemistry yet seems to move too fast to me. Ends on a cliff hand that promises more information so thank goodness because so far I'm still waiting for it to get good which isn't ideal considering that I finished the first book of three.
Read more
5 people found this helpful
Report abuse

Marian Chawner
5.0 out of 5 stars Two words. Jericho Forge
Reviewed in the United Kingdom on 18 January 2019
Verified Purchase
Jericho Forge, how on earth can India walls not fall down with this dark character. Mean, bossy, broody, and totally autonomous or is he? Is his Achilles heel Indy? Is he an armadillo, hard as nails on the outside, but soft on the inside? The story is swift, descriptive, deliciously sensitive and very compulsive to read. I do not intend to give any of the excellent plot away, but it is a fabulous storyline. A billionaire who has everything and more, but is very secretive and independent. A heroine who has an unruly younger sister, that gets kidnapped due to stupidity and she India is faced with trying to raise the ransom of $10 million dollars in a limited time. Her preferred way is gambling. She starts on a path she looses or wins!!! There is intrigue, drama, mystery and suspense and such wonderful descriptions of scenery, people and relationships. All characters are believable, some lovable, some annoying and some just downright gorgeous. Well worth five stars as ever and more. Can’t wait till the next instalment. As ever in a trilogy one heck of a cliffhanger, with more questions than answers.
Read more
One person found this helpful
Report abuse

Adi Angelova
5.0 out of 5 stars Brilliant. Witty. Addictive.
Reviewed in the United Kingdom on 16 January 2019
Verified Purchase
I'm not surprised in the slightest that I was 'consumed' by yet another phenomenal book by Meghan March. Her writing style, the way she weaves a story with details and describes steamy scenes is out-of-this-world.

Jericho Forge is unlike any of her other alpha-male, possessive, all-consuming and, let's face it, gorgeously dangerous characters. He's a force to be reckoned with; an unstoppable hurricane who gets everything he wants - but will he really get the one thing - or should I say person - he actually needs and craves above all else?

India - if that's is even her real name - is my spirit animal. She's witty, feisty, rebellious, possessive (as much as Jericho!), loyal and, to top it all off, a temptress. There are a lot of similarities to be found with Meghan's other heroines, but India is one-of-a-kind. Trust me. She will fight, deceive, negotiate, bargain and surrender in order to protect the people she loves. Will Jericho end up being one of those people though?

Book 1 in the trilogy, as suspected, left us holding our breaths to see how the story unfolds. I expected it - somewhat- but I definitely wasn't prepared for it. As Meghan said, the trilogy will be unlike anything she's written so far and she certainly didn't disappoint. Not that she ever does.
Read more
Report abuse

Lisa Pain
5.0 out of 5 stars O.M.G. W.T.F. I LOVE THE DEVIL
Reviewed in the United Kingdom on 22 January 2019
Verified Purchase
Ten stars if I could give them. Best book I've read a book you won't forget you've read. I adore Forge and of course totally envious of India. What a great pair they make. The sizzling heat in this book will burn your fingers as you turn the pages. I hate cliffhangers especially when I can't read the following book in the trilogy. If you haven't jumped on the I love Meghan March bus yet you definitely will when you read this book. Great story with so many possibilities for book 2 I really truly cannot wait. Thank you Meghan truly great book!!😍
Read more
Report abuse

Kindle Customer
5.0 out of 5 stars Pay the price!
Reviewed in the United Kingdom on 21 March 2019
Verified Purchase
India Baptiste needs money in a hurry, using her skill at cards she feels she can raise it during an underground card game. Jericho Forge gatecrashes the game and wins the pot! But he also wins India too. Together they are explosive and they end up married! Meghan knows how to write hot alpha characters and Forge is no exception. India is the perfect match for him! Worth more than 5 stars!
Read more
Report abuse
See all reviews
Back to top
Get to Know Us
Make Money with Us
Let Us Help You
And don't forget:
© 1996-2021, Amazon.com, Inc. or its affiliates