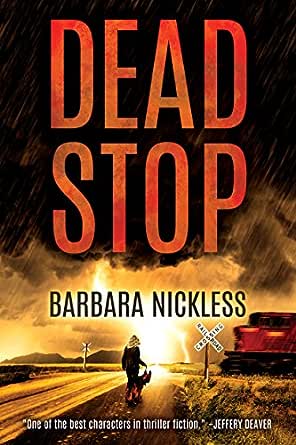 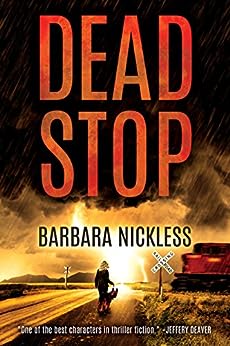 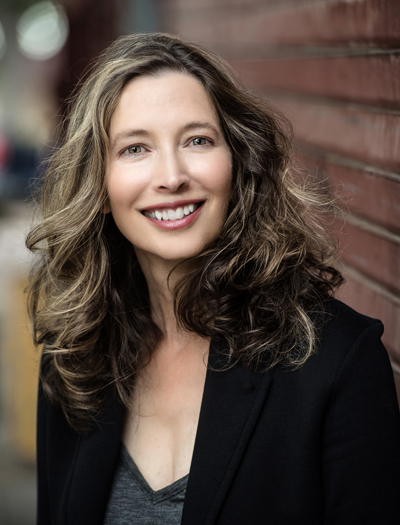 The search for a missing child leads a courageous railway cop down a twisted trail of murder.

It’s been five months since Special Agent Sydney Parnell survived a violent confrontation with a gang of brutal thugs, an encounter that left her physically and emotionally scarred. Deep down, Sydney fears she isn’t ready for another investigation. But when a woman is murdered on the train tracks and a child goes missing, she knows she’s the only one who can lead the hunt for the killer. While Denver police and the FBI chase down blind alleys, Sydney focuses on a single cryptic clue left behind at the crime scene—one that will send her down a path of greed, violence, and long-ago love.

With Denver beset by a series of monsoonlike thunderstorms that threaten to flood the city, Sydney and her K9 partner, Clyde, must wade through a murky trail of murder that stretches back thirty years—all to rescue a child…and catch a killer with a long memory and an insatiable appetite for destruction.

Barbara Nickless lives in Colorado, where she loves to snowshoe, hike, and drink single-malt Scotch--usually not at the same time. Her first novel, Blood on the Tracks, won the Daphne du Maurier Award of Excellence and the Colorado Book Award and was a Suspense Magazine Best of 2016 selection. Barbara is a member of Mystery Writers of America, Sisters in Crime, and International Thriller Writers. Her essays and short stories have appeared in Writer's Digest and Criminal Element, among other markets. Connect with her at www.barbaranickless.com.

Tuppence
5.0 out of 5 stars Looking forward to Book 3 (already ordered)
29 October 2017
Format: Kindle EditionVerified Purchase
Once again, Barbara Nickless doesn't disappoint. Her descriptive writing allows you to "see and feel" the environment, the structures and the climate she writes about and once again her research is of the highest standard. The issue of PTSD is very informative and perhaps the best written description I have read. The relationship between Clyde (canine) and Cohen (human) partner humanizes Sydney and allows a much needed relief from the savagery of the villain of the story.
Read more
One person found this helpful
Helpful
Comment Report abuse

Dorzi
5.0 out of 5 stars Rivetting
6 March 2019
Format: Kindle EditionVerified Purchase
Fantastic story with many twists and turns. Found myself sometimes holding my breath I anticipation. Would recommend to all who love the thrillers.
Read more
Helpful
Comment Report abuse

L.W
5.0 out of 5 stars Wonderful
29 October 2017
Format: Kindle EditionVerified Purchase
I loved the first book and now the same for the second book.Sydney Rose is one of my favorite book characters.
A very good story.

Although I think one can read this as a stand alone book, by starting with Blood on the Tracks, the first in the series, one will get a much better, and deeper understanding of who Sydney Rose Parnell and Clyde are.

Sydney, our heroine, is damaged. She is an "ex" Marine, with her tours in the Mortuary Services in Iraq. Yeah, you'd be damaged, too. Clyde, her faithful K9 companion, is also an "ex" Marine and Iraq war veteran. He's not quite as damaged as she is.

I'm not sure if this book is a little darker than Blood on the Tracks, or if it's because I forced myself to read it more slowly, instead of inhaling it in one sitting, therefore getting more of the story. It is very intense, gritty. And oh-so-hard to put down.

Sydney is still collecting and living with her ghosts, is in therapy at the VA, and finds herself embroiled in another murder on her tracks, and a race against time to find the murderer and save a missing child. There is murder and mayhem, though it's germane to the story, not gratuitous. In fact, much is left to your own imagination.

We get more of Sydney's thoughts from her journal entries, many of which appear as epigraphs to each chapter. She is dealing with her PTSD, but it costs her.

Personally, I love having a heroine that I can actually believe in. She isn't perfect. She isn't the Ice Woman. She's a veteran with issues she must learn to live with, and she is learning. If you, or someone you know, have PTSD, this might be a helpful book. Yes, it may bring up flashbacks, but you may learn a bit from how Sydney handles hers. And, if you are a vet, thank you for your service.

The ending of this book leaves it wide open for Book 3. Which will not be available soon enough to suit me. I think it highly unfair that even though I took my time reading this book, it still takes her longer to write one than for me to read it.

honest Abe
5.0 out of 5 stars A 4.5 rating
19 October 2017 - Published on Amazon.com
Format: Kindle EditionVerified Purchase
Barbara Nickless follows up her initial novel featuring Sydney Parnell with a very good sequel, But, it isn't quite as compelling as the original. The first offering had atmospherics that were chilling, and there was the fascinating sub plot in Iraq that produced Parnell's PTSD. The personality disorder continues with what Parnell calls moral injury or guilt based upon the ghosts of her past in combat. Still this story is interesting, mysterious, complex, and spans several decades. Rose and her partner Clyde a Belgian Malinois and veteran of Iraqi combat face bombs, rifle power, and nature in their obsessive effort to save a child from a mass killer. Clyde is as important to the story as any character and the reader fears for Clyde as much as for Parnell. The story reaches a crescendo that will have you turning the pages as quickly as your fingers can bear. For me, 4.5 is about right. Maybe the original was just too good to match. Nickless is top notch.
Read more
11 people found this helpful

Dee Arr
5.0 out of 5 stars Detective Thriller from Polished Author Won't Disappoint
3 October 2017 - Published on Amazon.com
Format: Kindle EditionVerified Purchase
Today’s literary field is covered with about a half million books a year, and it seems many writers believe all they have to do is sit down at a keyboard and type. They could learn a thing or two from Barbara Nickless.

Her new book, “Dead Stop,” is impeccably researched. From police procedural aspects to railroad facts and even right down to the mental challenges faced by her lead character, Sydney Rose Parnell, Ms. Nickless has inserted more than enough information to breathe life into this novel and make it real. But the list of good things about this book doesn’t stop there.

Sydney Parnell’s character is complicated, and the author allows her to share everything. Some of the minor characters are only in scenes briefly, yet just as when we meet someone in person, readers are privy to a range of personality indicators run through Sydney’s filters. Having well-defined characters, even the ones who are only going to be around for a few pages, wakes the book up and brings it to life.

The plot is intense and very believable. The entire story takes place over a few days, as Sydney hunts for both a missing child and a deranged killer. A second mystery unfolds and Ms. Nickless reveals that there is a tangible back story, with potentially more murders that could be connected with current events. Sydney works desperately, racing against time to unwind all the threads. An interesting twist is Ms. Nickless choosing to give Sydney a canine partner. Clyde is an integral part of the novel, and the interplay between the dog and Sydney ranges from serious to humorous.

If anything bothered me at all about this book, it was Sydney’s battle with her past. A war veteran assigned to Mortuary Affairs, she is confronted regularly by the manifestations of her more haunting experiences. While Ms. Nickless writes with excellence in describing the post-traumatic stress, there are so many other detective authors using this idea – saddling the main character with a physical or mental issue to deal with – that I can’t help but wish for Sydney to find a way through her troubles. Ms. Nickless is a gem of an author, and I believe she can give Sydney other interesting problems to deal with while leaving the PTSD issues behind.

While “Dead Stop” is the second book in the series, it can be read as a standalone. There are a few references to the first story (“Blood on the Tracks”), although little of the main plot is revealed and one could conceivably read the two books in reverse order…though why would you want to? If you’re a fan of detective/suspense stories, you won’t do better than these two books by Barbara Nickless. Four-and-a-half, rounded to five stars.
Read more
26 people found this helpful
Go to Amazon.com to see all 1,302 reviews 4.8 out of 5 stars
Get FREE delivery with Amazon Prime
Prime members enjoy FREE Delivery and exclusive access to movies, TV shows, music, Kindle e-books, Twitch Prime, and more.
> Get Started
Back to top
Get to Know Us
Make Money with Us
Let Us Help You
And don't forget:
© 1996-2020, Amazon.com, Inc. or its affiliates