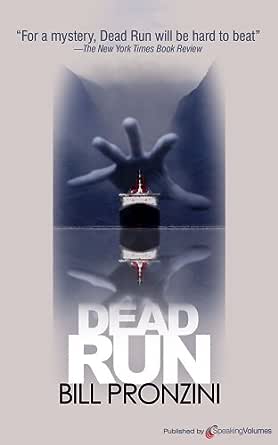 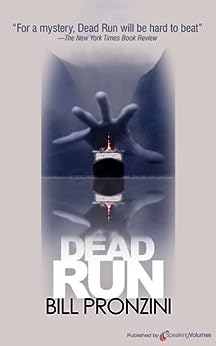 "For a mystery, Dead Run will be hard to beat"—The New York Times Book Review

On the way to his new job, traveling by ship along the Malaysian coast from Singapore to Kuala Lumpur, Dan Connell finds himself entangled in peril.

Aboard a beat up old ship, in the slums outside of exotic Kuala Lumpur, at a rubber plantation, and deep in the jungle, Connell discovers he's being pursued by ruthless killers—but he can't figure out why.

"Pronzini makes people and events so real that you're living those explosive days of terror."
—Robert Ludlum

"Once in a crocodile's age you come across a writer whose work you instinctively like... I've found one—Bill Pronzini. Buy him, read him, and relax."
—Los Angeles Times

"A skilled writer working at the top of his ability."
—Denver Post

"His novels are packed with adventure, fresh characterization, and minute-by-minute suspense."
—Chicago Tribune

"Pronzini is the master of the shivery, spine-tingling it-could-happen suspense story."
—Publishers Weekly

"Pronzini is a pro."
—The New York Times

Bill Pronzini is simply one of the masters. He seems to have taken a crack at just about every genre: mysteries, noirish thrillers, historicals, locked-room mysteries, adventure novels, spy capers, men's action, westerns, and, of course, his masterful, long-running Nameless private detective series, now entering its fourth decade, with no signs of creative flagging. He's also ghosted several Brett Halliday short stories as Michael Shayne for Mike Shayne's Mystery Magazine, and has managed to collaborate with such fellow writers as John Lutz, Barry Wahlberg, Collin Wilcox and Marcia Muller. Still, if he never ventured into fiction writing, his non-fiction work, as both writer and editor, would still earn him a place in the P.I. genre's Hall of Fame. Besides his two tributes to some of the very worst in crime fiction (what he calls "alternative classics"), Gun in Cheek and Son of Gun in Cheek, and one on western fiction (entitled Six Gun in Cheek, naturally), he's the co-author (with Marcia Muller) of 1001 Midnights. The Mystery Writers of America have nominated him for Edgar Awards several times and his work has been translated into numerous languages and he's published in almost thirty countries. He was the very first president of the Private Eye Writers of America, and he's received three Shamus Awards from them, as well as its Lifetime Achievement Award in 1987.
click to open popover

Amazon Customer
5.0 out of 5 stars Five Stars
29 January 2018 - Published on Amazon.com
Verified Purchase
Excellent, fast paced adventure yarn, marred only by unnecessary typos. Still well worth the price, highly recommended.
Read more
Go to Amazon.com to see all 2 reviews 5.0 out of 5 stars
Get FREE delivery with Amazon Prime
Prime members enjoy FREE Delivery and exclusive access to movies, TV shows, music, Kindle e-books, Twitch Prime, and more.
> Get Started
Back to top
Get to Know Us
Make Money with Us
Let Us Help You
And don't forget:
© 1996-2020, Amazon.com, Inc. or its affiliates