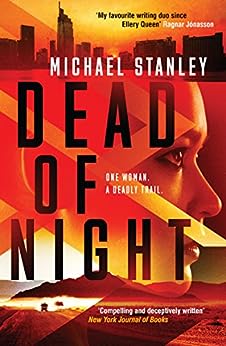 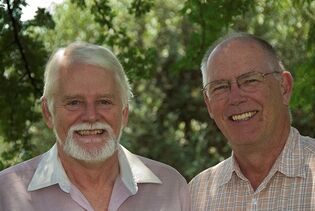 Michael Stanley is the writing team of Michael Sears and Stanley Trollip.

Both are retired professors who have worked in academia and business. Sears is a mathematician, specializing in geological remote sensing. Trollip is an educational psychologist, specializing in the application of computers to teaching and learning, and a pilot. They were both born in South Africa.

They have been on a number of flying safaris to Botswana and Zimbabwe, where it was always exciting to buzz a dirt airstrip to shoo the elephants off. They have had many adventures on these trips including tracking lions at night, fighting bush fires on the Savuti plains in northern Botswana, being charged by an elephant, and having their plane's door pop open over the Kalahari, scattering navigation maps over the desert. These trips have fed their love both for the bush, and for Botswana.

It was on one of these trips that the idea surfaced for a novel set in Botswana.

Susan Hampson
5.0 out of 5 stars Superb
Reviewed in the United Kingdom on 27 July 2018
Verified Purchase
Oh wow this story is brutal, brilliant and utterly breath-taking, my favourite of this writing duo so far. When freelance journalist, Crystal Nguyen’s friend drops of the scale of social net working, after going to Africa to do a little digging and poking where he shouldn’t, she becomes more than a little concerned. Now Crys has the opportunity to go to Africa to find out more about the buying and selling of rhino horns, both legal and illegal for the National Geographic, giving her the opportunity to try to hunt down her missing friend too.
You really need to take a big breath in before starting reading because the tension never ceases in this all action on the edge of your seat story. Crys is the main character with one of the Tshukudu game guides and anti-poaching team men, Bongani, making up this working duo. Bongani is sort of her passage into places that she wouldn’t have access to. The hierarchy obviously want the story to be positive about what is being done to control poaching of rhino horns. Crys on the other hand wants the truth.
This is a tell it how it is story with no holds barred and boy it is descriptive and brutal both for animal and human. The story brought all my senses alight as two worlds emerged. The one of the tourist, where they only see the beauty to the reality of greedy men with corrupt police that can make someone disappear. I read this book stunned equally with this truly amazing land and sorrow of the plight of these magnificent creatures. Most of all it opens your eyes to the people of this country too. It is easy to judge when you have a full belly and you don’t live in fear. Totally stunning in every ‘sense’ of the word!
Absolutely loved this book, definitely moved into my top five for this year.

Spicewalker
5.0 out of 5 stars High action set in a world of Rhino poachers
Reviewed in the United Kingdom on 14 August 2018
Verified Purchase
I really enjoyed reading the Detective Kubu series by Michael Stanley so when I heard that there was to be a standalone thriller released this year, I was immediately intrigued and keen to read the book. What I have loved about this writing duo is the way in which they are able to recreate the African landscape and make it feel so authentic as though you are right there in the heart of the action. This time it seems the pair know no borders, taking the reader from their native South Africa to Switzerland and Vietnam in a book which is as topical and important as it is thrilling and packed with action.

The story follows journalist Crystal 'Crys' Nguyen who is in South Africa for two reasons. The most important is an assignment from National Geographic to create and article on Rhino poaching and its devastating effect on the Rhino population. The second, and in truth Crys' most pressing need, is to find out what happened to her friend and fellow reporter, Michael Davidson, who had been assigned to cover the story before her but who had not been heard from for weeks. It is clear that investigating poaching will be a highly dangerous undertaking, the worth of the industry running into the millions, but nothing can prepare Crys, or the reader for what is to come to pass.

This book is hard hitting, fast paced and full of thrills and action in a way that you would not believe. The authors do not spare the harsh truth of the act of poaching, or of the price that poachers may pay if they are caught. This is a serious business and one which is threatening wildlife across the globe, not just Rhinos but elephants, lions, tigers... There seems to be little that people will not pay thousands of pounds to hunt and own these days. This is most clearly portrayed in this novel with the authors highlighting the true cost of the industry in terms of the animals -in this case Rhinos. But they also go one step further, taking it beyond a simple preaching novel about why poaching is bad, and examine the reasons why a person may turn to poaching and the harsh realities of the life of those who refuse to take part. It is as emotional for this storyline as it is for the fate of the animals themselves.

In Crys Nguyen, the authors have created a really intriguing protagonist. She is tough, an athlete, also prone to meditation and yoga, but she is also feisty and determined and there is nothing she will not do it seems. She is not superwoman, there are clear limits to her abilities and she manages to find herself in mortal danger on a number of occasions, once at her own hand, but she is resilient and unafraid and will fight to find the truth, even if it costs her own life. I really liked her, although on occasion doubted her sanity. So many times I'd have just run the other way and yet when she has the chance to get away she pushes herself further into the case and further into danger. You had to admire her tenacity.

Now Crys is not alone in her investigations. She spends time on a Nature Reserve where she meets Johannes Malan, his father Anton and their game guide, Bongani. These are all richly drawn characters and I found myself warming to Johannes and Bongani very quickly. Bongani especially was a great character, his story compelling and authentic and his friendship with Crys quite special at times. Johannes was such a passionate man, so determine to protect his Rhino but with very differing views on how this could adequately be achieved to perhaps some of those around him. The discussions that he and Anton had with Crys certainly opened up some interesting discussions on the very nature of Rhino poaching, something which is done simply for the perceived, if unproven, physical benefits of the horn. True medical miracle or just superstition, the method of removal used by poachers is just barbaric and so, so tragic.

This is a hard read at times, with scenes which will make you wince, others that will have you on the edge of your seat, heart pounding. It is also filled with moments of quiet, where there is nothing to do but contemplate the rights and (thoroughly) wrongs of the whole poaching culture. It is hard for me to get my head around why anyone would wish to harm these wonderful creatures for a mass of matted hair and yet in Africa it is sad, cruel and often violent reality which has been reflected perfectly on the page. But the story is more than a sociopolitical statement and there are elements in it which will have you puzzled and will really make you think about the facts you are being presented with. Who is behind the poaching? Of those purporting to help Crys, who is truly friend and who foe? Certainly it had me guessing and second guessing as I powered through the pages.

If you would like to read a book which is both entertaining and thought-provoking, which will transport you from the wild African bush to the seedy and corrupt streets of Vietnam, and one which will give you a strong and determined female lead, then do pick this book up. I'd highly recommend it.
Read more
Report abuse

Peterborean
5.0 out of 5 stars The Dead of Night written by the Brothers Michael and Stanley.
Reviewed in the United Kingdom on 21 September 2018
Verified Purchase
It is a novel set in the Kruger Game Park in south Africa about the Rhino Horn smuggling 'business' . You will be glad to know that the brothers are against it! It is a wonderful poignant book looking at the far east's [in this case particularly Vietnam's] role in the Rhino Horn Trade.
A brilliant book and will appeal to Conservationists and mystery lovers alike. People like me who are bothe are happy as a porker in its natural environment!
Read more
Report abuse

organist
5.0 out of 5 stars Excellent could not put it down!
Reviewed in the United Kingdom on 7 September 2018
Verified Purchase
A fast moving thriller with lots of twists and turns. Who can you trust? The heroine is absolutely right. Rhinos must be saved but how?
Read more
Report abuse

William Nash
5.0 out of 5 stars Dead of Night
by Michael Stanley
Reviewed in the United Kingdom on 13 July 2018
Verified Purchase
Very interesting read, couldn't put the book down as I became so engrossed in the plot. The cruelty of wildlife poaching, lack of value of human life and mercenary behaviour of man is very vividly portrayed in this book.
Read more
Report abuse
See all reviews
Back to top
Get to Know Us
Make Money with Us
Let Us Help You
And don't forget:
© 1996-2021, Amazon.com, Inc. or its affiliates