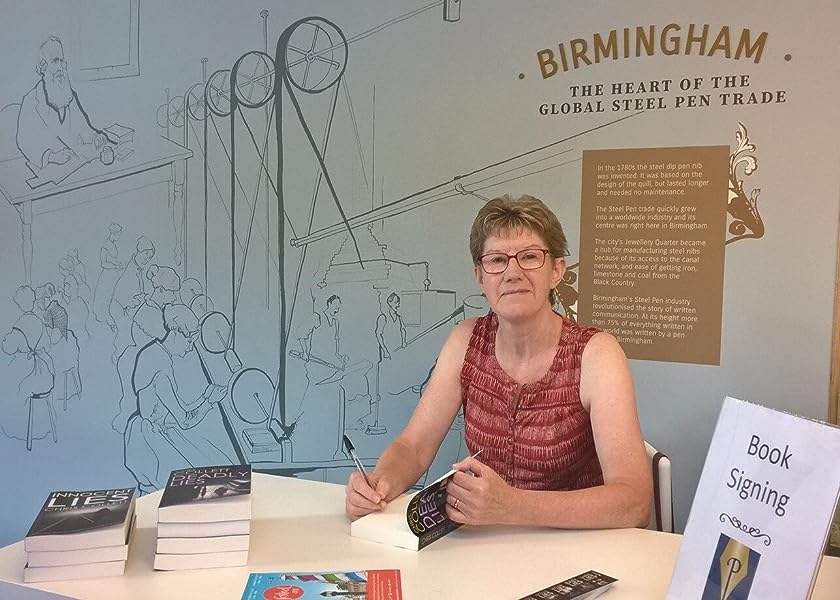 by Chris Collett (Author)
4.8 out of 5 stars 9 ratings
See all formats and editions
Sorry, there was a problem loading this page. Try again.

"Procedural fans are in for a really good time." Publishers Weekly "Cleverly plotted, with an unexpected shock ending, plenty of suspense, and a likably genuine cast of characters, this is a strong new entry in an increasingly popular police-procedural series." Booklist "A strong pace and multidimensional characters keep this British procedural moving briskly" Library Journal

Chris Collett lives in Birmingham where she teaches both children and adults with learning disabilities. She is the author of five previous Detective Inspector Tom Mariner mysteries.
Tell the Publisher!
I’d like to read this book on Kindle

Caroline
5.0 out of 5 stars Gripping and twisting police procedural/crime drama!
Reviewed in Australia on 23 February 2015
Certainly a story I will not be forgetting in a hurry, Dead of Night (A Tom Mariner Mystery #7) has it all. From a brilliant, twisting plotline to likable and believable characters, as well as a powerful, emotive and intense atmosphere that will grip you and hold you until the very end.

I love that I threw myself into the series with book 7 and yet was able to warm to the characters immediately, at the same time as becoming aware of their personal situations and how they are connected to Detective Inspector Mariner. The story focuses on Mariner’s perspective as we follow his character through the investigation of a missing woman, leading us to more questions than answers when further women disappear.

Chris Collett remains true to the description of a police procedural as the reader is taken on a journey of the whole investigation, keeping track of what each officer is looking into and the results they achieve. There are times when they get results and times when they hit a brick wall – making the investigation gritty, realistic and believable.

The mystery of the plot is written well, and despite various leads to follow and different characters, it is a read that can be followed easily, yet still surprises. All information is run by him which helps keep everything together, and the reader is aware of his thoughts on the case from very early on and throughout. But one has to admire him for keeping his early instincts to himself. Instead, he asks his immediate officers what they believe could be the case.

As the author has created many likable characters, and allows the reader to become close to them, it also makes for an emotional read at times as you become absorbed in their circumstances and live through the events with them. One of the best examples of this is little Dominique. Dominique is a little girl, living in a tower block with only her mum. Usually going out to work of an evening, while Dominique is tucked up in bed, her mum is usually back home before Dominique gets up. But one morning Dominique awakens to find her mum gone. The hours turn into days and poor little Dominique must be terrified, but still manages to go to school and tries to carry on. This storyline is absolutely heart-breaking and the manner in which it is written – with great care and sensitivity – is so, so powerful.

With the first woman, Grace Clifton, going missing and little to go on initially, when a package of her laundered clothes arrives at the station it is quite eerie but so intensely gripping as it opens up more questions. The twists and turns that the investigation bring up are fantastic and some of it is so subtly written. I could quite easily imagine this to be a televised drama.

I enjoy the team that Mariner works with, as they adjust to working together, and I also like the way in which Mariner’s old team members are incorporated into the story. This makes a great read for new fans of the series, as well as holding fans of the previous books. This also keeps it real with having different characters and seeing how they move on or indeed turn up. And knowing the characters from Tom Mariner’s previous team certainly made me want to retrace their stories and read the previous books of the series – one of them being on maternity leave and another working with an armed squad investigating gun crime!

As events are centred in and around Birmingham (UK) it is very easy for those familiar with the area to follow the sites of the book. From Birmingham Centre’s Symphony Hall, Broad Street and New Street train station, along the Bristol Road and places outside of the centre, making the story more real.

Dead of Night is a story I would strongly recommend for fans of crime dramas and police procedurals. With a strong knowledge of the area, a great deal of research and a disturbing mystery, this story comes alive. And DI Tom Mariner is certainly a detective I want to read more about. I will certainly be going back to read the previous books of the series.
Read more
Helpful
Report abuse
See all reviews

Mrs Maria S
5.0 out of 5 stars Good Read
Reviewed in the United Kingdom on 18 June 2018
Verified Purchase
I really enjoy a Tom Mariner book, they are full of interesting characters, red herrings and twists. A well written British police procedural story, with a satisfying plot set in and around Birmingham. Looking forward to the next one.
Read more
One person found this helpful
Report abuse

Nanna and little munchkin
5.0 out of 5 stars A must read
Reviewed in the United Kingdom on 28 July 2016
Verified Purchase
I have read all chris colletts books and this one once again i just couldn't put it down, i can't wait for her next book to come out, you are gripped from start to finish, what a brilliant author,
Read more
One person found this helpful
Report abuse

roy dutton
5.0 out of 5 stars Glad to have detective Tom Mariner back
Reviewed in the United Kingdom on 14 July 2015
Verified Purchase
Another great Tom Mariner story. Enjoyed knowing all the Birmingham locations & as usual
never sure who was the real suspect.
Read more
One person found this helpful
Report abuse