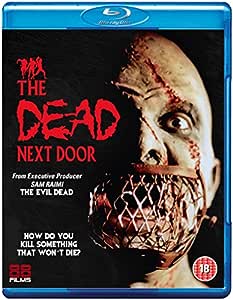 The Dead Next Door

Format: Blu-ray
3.4 out of 5 stars 78 ratings
Region 1 encoding. (Most single-region DVD players sold in Australia play only Region 4 DVDs or Region B/2 Blu-Ray discs. Items like this one may require a region-specific or multi-region DVD player and compatible TV. More about DVD formats)

Quick Shipping !!! New And Sealed !!! This Disc WILL NOT play on standard US DVD player. A multi-region PAL/NTSC DVD player is request to view it in USA/Canada. Please Review Description.

Hiraeth
5.0 out of 5 stars This movie holds a special place in my heart ♥
1 August 2018 - Published on Amazon.com
Verified Purchase
This movie will always be special to me. Not only was it filmed and takes place in and near my hometown of Akron, Ohio but my best friend from high school, my brother and I were all zombie extras in it. I have wonderful memories of being on location in Springfield Twp, of having undead makeup slathered all over my face, of joining the other extras to shoot the zombie hoard scenes. Good times! The completed movie got the attention of none other than Sam Raimi, who ended up serving as Executive Producer and was instrumental in getting it distributed, and the awesome Bruce Campbell even voices two of the characters! No, the film isn't going to win any Oscars but, then, that's never what it was about in the first place. A very young J.R. Bookwalter set out to prove he could do it -- writing, directing and scoring the music -- and he totally did it. All of that, plus buckets of blood... what more could any horror fan wish for?
Read more

Johnny5437
4.0 out of 5 stars Once I thought I was wrong but I was mistaken
7 August 2014 - Published on Amazon.com
Verified Purchase
This is what you expect from a guy that once worked with George A Romero on Dawn of the Dead, who then goes out and hires a film crew and cast to work on a zombie film he wrote, but they have absolutely not budget and noone gets paid until after the films release. True story, everyone that worked on this film did so on the premise that it would make a profit, how it could it not being shot on super 8 with unknown actors whose characters names parodied known horror icons. It actually turned out to be a truly good effort that has become a silent underground cult classic especially among b movie and romero zombie fans. I especially enjoy the religous who believe the zombie are their servants sent by god to bring punishment and cleansing etc. I find it funny romero used a similar less religious situation in his survival of the dead about 2 decades later. If you are someone who loves to watch bad movies or loves zombie movies, this is worht a look
Read more
7 people found this helpful

Venus Regina
2.0 out of 5 stars A film made with a lot of love, and little talent
1 August 2016 - Published on Amazon.com
Verified Purchase
I had obsessed over this movie for ages, based on the cover graphic alone. Every time I saw it, I was determined I would watch it, someday, but just never seemed to get around to it. I think the image used to advertise brought back old traumatic memories of my first time watching the Savini version of Night of the Living Dead. I was way too young, perusing late night cable while babysitting at a house in the woods, and I had nightmares for weeks. So seeing that image of the zombie with the mask brought back the chills of my first encounter with the Living Dead, and I avoided the film, thinking it would scare (scar?) me the same way. Much older and wiser - or just more jaded - I finally faced my fears. Wow, was I worried for nothing. The marketing genius who came up with that advertising image can pay himself on the back for creating the scariest piece of this film. This is a movie clearly made by amateurs with a love of the genre, and I will gladly give them points for enthusiasm. Execution, however, leaves much to be desired. The acting ranges from laughable to painful. The video quality is subpar. The makeup and effects are obvious labors of love, but they haven't aged well. And the script feels like it was written by committee, with awkward dialogue and a subplot that goes nowhere. Hollywood is so fond of remakes, but they always choose their own big-budget films that don't need remaking. Here is a film with a solid foundation that only needs a little polish from some professionals. I would love to see what it would look like with an actual budget and real actors. A hell of a lot more than I want to see yet another Friday the 13th reboot.
Read more
5 people found this helpful

Skip BizR
5.0 out of 5 stars Great restored. Read further.
28 October 2018 - Published on Amazon.com
Verified Purchase
What can I say always loved it looks better. Sound well they should of left both in so you could choose the original over dub sounded better. But none the less the extras and restoration amazing si wirth ot either way.
Read more

Alex2king
5.0 out of 5 stars Loved it! Not known enough in Canada
14 December 2019 - Published on Amazon.com
Verified Purchase
It's a very good low budget movie that as interesting take on the zombie gendra 💯
Read more
Go to Amazon.com to see all 76 reviews 3.4 out of 5 stars