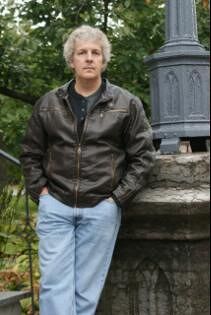 by Steve Hamilton (Author), Nick Sullivan (Reader)
4.2 out of 5 stars 278 ratings
See all formats and editions
Sorry, there was a problem loading this page. Try again.

Praise for Dead Man Running "Brilliant...The plot develops in multiple unexpected directions, and its logical convolutions are matched by Hamilton's deepening portrayal of his fully realized lead."--Publishers Weekly "Alex McKnight's been put through the ringer before, but never quite like this....Steve Hamilton rakes his hero over the coals, taking him to hell and back as he faces off with a man so evil that he'd scare the hell out of the devil himself. Full of twists and turns, Hamilton's latest McKnight novel is raw, dark, and absolutely relentless....Dead Man Running proves that Steve Hamilton is one of the best crime writers on the planet, and his latest showing will leave readers begging for more."--The Real Book Spy "Hamilton's long-awaited reboot of the McKnight series is a streamlined, gut-wrenching thriller."--Booklist Praise for Steve Hamilton and the Alex McKnight series

STEVE HAMILTON is the New York Times-bestselling author of fourteen novels, most recently the critically acclaimed Exit Strategy and The Second Life of Nick Mason. His debut, A Cold Day in Paradise, won both an Edgar Award and a Shamus Award for Best First Novel. His standalone novel The Lock Artist was a New York Times Notable Crime Book and won an Alex Award and the Edgar Award for Best Novel. He attended the University of Michigan, where he won the prestigious Hopwood Award for writing, and now lives in Cottekill, New York, with his wife and their two children.

4.2 out of 5 stars
4.2 out of 5
278 global ratings
How are ratings calculated?
To calculate the overall star rating and percentage breakdown by star, we don’t use a simple average. Instead, our system considers things like how recent a review is and if the reviewer bought the item on Amazon. It also analyses reviews to verify trustworthiness.

Carol Michael
5.0 out of 5 stars Absolutely Riviting
Reviewed in Australia on 30 September 2018
Verified Purchase
This is the best Alex McKnight book ever - it is riviting and keeps you on the edge of your seat all theough the book - I so look forward to the next book - Thank you so much for your brilliant work
Read more
Helpful
Report abuse
See all reviews

Malcolm R
4.0 out of 5 stars Not the McNight we know
Reviewed in the United Kingdom on 21 October 2018
Verified Purchase
Not the usual Alex McNight thriller but very good nonetheless. Our hero is dragged into the hunt for a serial killer not knowing why though eventually he does but he has already left the FBI floundering in his wake and has to sort it out by himself - heroically! There are a few problems; I did not realise designing a robotic arm was so profitable or else how could the baddie afford everything he does and has done, why do the FBI never solve these cases?, the reason why the psycho bears the grudge seems out of proportion to what he does and lastly how does he kill so many people without anyone noticing? Still a rip roaring story which I enjoyed very much.
Read more
One person found this helpful
Report abuse

Max Stealth
1.0 out of 5 stars His Worst Book
Reviewed in the United States on 31 August 2018
Verified Purchase
Having read and liked all Hamilton's other books, I was repulsed with Dead Man Running. Superficial, formulaic, tired old stereotypes, credibility issues, and an overall icky tone and feel. It was without any redeeming qualities. I'm sad to write a negative review for an author I have liked, but if anything, I have toned down my distaste in this review.
Read more
23 people found this helpful
Report abuse

TMStyles
3.0 out of 5 stars Not The Alex McKnight Readers Expect
Reviewed in the United States on 2 September 2018
Verified Purchase
Steve Hamilton's latest Alex McKnight novel is atypical enough from the norm to defy easy reviewing. Due to a series of implausible events, Alex agrees to accompany a troop of FBI agents taking an accused serial killer, Martin Livermore, to find the bodies of victims. Alex does not know this killer but willingly jumps on board a metaphorical train driven by an evil genius that begins an extended chase, often accompanied by unrelenting suspense. Why does the killer know so much about Alex's past and why does he insist that Alex accompany him? What is the end game and what is the motivation for Livermore's intensely detailed plot to entangle Alex?

The problem for this reader was the lack of credibility for much of what happens throughout the convoluted plot; indeed, Alex McKnight is no where near the same detective and problem solver that loyal fans have come to expect. I found it difficult to suspend disbelief in critical junctures. Alex is made to seem a superior thinker to the entire FBI force, yet he is made to look stupid and inept over and over again by the "mad genius". Changing a beloved character's personality and character for a specific book in a series is always a dangerous idea.

"Dead Man Running" is a very readable book with an ingenious, if difficult -to-believe plot. But if you are expecting the usual Alex McKnight adventure with his usual environs and supporting cast along with his intuitive and instinctual intellectual leaps, this effort will disappoint.

S. Baldwin
3.0 out of 5 stars Advertised as a McKnight novel, don't be fooled
Reviewed in the United States on 1 September 2018
Verified Purchase
I love Steve Hamilton. While my favorite is the Alex McKnight series, I enjoyed his stand-alones as well. Always well written with excellent plots. This book, which is advertised as a McKnight novel, is not. It's as though Hamilton had a storyline for a another stand-alone and added McKnight to sell the book. I bit. I bought. Just as essential as McKnight are the Upper Peninsula and regular characters. Also, the plot is so forced, it strains believability.
Read more
17 people found this helpful
Report abuse
See all reviews
Back to top
Get to Know Us
Make Money with Us
Let Us Help You
And don't forget:
© 1996-2021, Amazon.com, Inc. or its affiliates