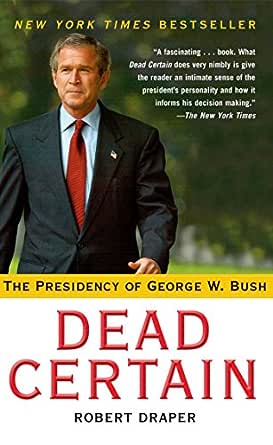 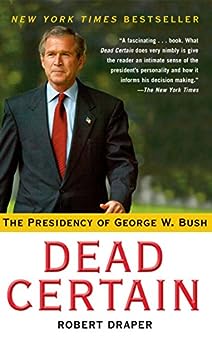 "A fascinating...book. What Dead Certain does very nimbly is give the reader an intimate sense of the president's personality and how it informs his decision making." - The New York Times

"What Draper does with great skill in Dead Certain is debunk caricatures of George Bush, both positive and negative. In place of the dim-witted bogeyman of the left and the resolute hero of the right, Draper introduces a three-dimensional man full of contradictions." -- Salon.com

"A fascinating look at both [the Bush] presidency and his personality." -- Brian Williams, NBC Nightly News

"Draper is no apologist for the administration, and for Bush-bashers there are plenty of nuggets.... But the overall portrait sheds a humanizing light on a much-vilified president." -- Los Angeles Times

"An intimate portrait of a White House racked by more infighting than is commonly portrayed." -- The Washington Post

"Washington's hottest dinner-party book this autumn." -- The Observer (UK) --This text refers to an out of print or unavailable edition of this title.

Robert Draper is a contributing writer to the New York Times Magazine and National Geographic and a correspondent to GQ. He is the author of several books, most recently the New York Times bestseller Dead Certain: The Presidency of George W. Bush. He lives in Washington, DC. --This text refers to an out of print or unavailable edition of this title.

russaac
4.0 out of 5 stars Insightful
Reviewed in the United Kingdom on 5 March 2012
Verified Purchase
The author gives us quite an impartial look over the life and presidency of George Bush. It's neither pro nor anti, which is something rare nowadays when dealing with such polarizing public figures. I enjoyed it quite a lot and would definitely recommend it to anyone looking for a unbiased point of view.
Read more
Report abuse

Michel Thibodeau
4.0 out of 5 stars A real president like no other in 70 years
Reviewed in Canada on 25 August 2016
Verified Purchase
Great...Bush takes the BS out of the American presidency!
His approach is not that of a super hero.
He refreshingly comes across as a real human!
Read more
Report abuse

bubbapug
5.0 out of 5 stars Bush....truly an american tragedy for the world
Reviewed in the United States on 4 July 2019
Verified Purchase
While I am no bush fan, reading this book helped me understand just how much of an arrogant ignorant imbecile he really was. Should he go down as one of the worst leaders in modern times?

Franklin the Mouse
4.0 out of 5 stars Fills in some gaps about Bush's character
Reviewed in the United States on 20 April 2008
Verified Purchase
As Mr. Draper stated, "Bush's virtues and his vices were one and the same." This statement pretty much sums it up for every person that has been our president. Mr. Draper has done a fine job of helping to make President Bush a more rounded character. However, I would not recommend the author's book as the definitive analysis of this controversial man. In fact, there is no such book that I am aware that can claim to be so. Mr. Draper's book has plenty of areas that could have been covered in more detail, but will have to be left to other historians. Ultimately, if you appreciate political books, you'll likely enjoy this one. The story moves along very well, is informative and quite entertaining.
Read more
3 people found this helpful
Report abuse

Quijote
4.0 out of 5 stars Close Encounters
Reviewed in the United States on 2 November 2007
Verified Purchase
Largely anecdotal rather than scholarly, this book gets more and more interesting as the comments of various players, observatons, and historical details accumulate. The author does not take a single political view of the people and events described, and at times is rather sympathetic to the President, who comes across as the kind of guy with whom a lot of us would enjoy downing a couple of (perhaps nonalcoholic) brewskis. Nevertheless, I found the final picture, or perhaps collage, of the Bush II administration to be very disturbing. What emerges is the image of an administration that is secretive, has deliberately isolated itself from dissenting opinion and is centered on a president who wants to be "the decider" but is decidely unprepared for the job, incurious and uniformed. What happens when when such an adminsitration prevents the Decider from confronting reality, as with the Katrina aftermath, while simultaneously claiming to be above the law in matters such as the torture of prisoners and political interference with the Department of Justics? Readers can write the final chapter for themselves.
Read more
2 people found this helpful
Report abuse
See all reviews
Back to top
Get to Know Us
Make Money with Us
Let Us Help You
And don't forget:
© 1996-2021, Amazon.com, Inc. or its affiliates