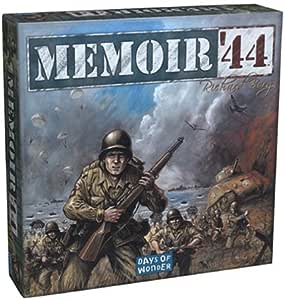 Memoir '44 is a unique historical game from Days of Wonder where players command a horde of little plastic Army men facing-off in dozens of WWII battles on an oversize hex game board. Each battle scenario mimics the historical terrain, troop placements and objectives of each army. Deploying forces through a variety of Command cards, the smart commander uses the unique skills of his units to their greatest strength. Easy to learn and fast-paced, Memoir '44 requites strategic card play, timely dice rolling and an aggressive, yet flexible battle plan to achieve victory. There are 17 unique historical scenarios, including a monster-size double-board version of Omaha Beach. The game has a double-sided, three section board map of the battlefield, featuring beach landings and countryside terrain. There are 44 lavishly painted double-sided terrain hexes, along with the 3D miniatures and obstacles to go on them. Also included are 60 Command cards, including 20 WWII Tactics cards and 40 troop movement Section cards, and two Army bags of incredibly detailed miniatures. You also get a cardholder to share with your "command staff" and some time-saving Terrain summary cards.

4.8 out of 5 stars
4.8 out of 5
562 global ratings
How are ratings calculated?
To calculate the overall star rating and percentage breakdown by star, we don’t use a simple average. Instead, our system considers things like how recent a review is and if the reviewer bought the item on Amazon. It also analyses reviews to verify trustworthiness.

Azalot
5.0 out of 5 stars Fantastic introduction to table top war gaming
Reviewed in Australia on 23 January 2020
Verified Purchase
It’s a good gateway if you have people in your life who are so so on table top war games . If your a seasoned war gamer tho, memoir might not have enough meat on its bones
Read more
Helpful
Comment Report abuse

A. Whitehead
5.0 out of 5 stars Possibly the greatest 2-player board game ever made
Reviewed in the United Kingdom on 6 December 2018
Verified Purchase
Memoir '44 is a two-player game which sits on the edge between being a board game and wargame. Like wargames, the game plays across a hex-based board with miniature figures and pieces representing different terrain. However, the game is propelled by a straightforward card mechanic with no need to use rulers, hordes of dice or complex rules for height adjustment or reinforcements. Memoir '44 reduces the wargame to its most basic components without foregoing tactical complexity.

The map is double-sided, with open countryside on one side and a beach landing setting on the other. The game comes with a lot of hexagonal tiles representing different terrain: hills, bocage (the infamous Normandy hedgerows), forests, rivers and villages. Each terrain piece gives extra protection or bonuses to units located in that terrain. Combined with other pieces, such as bridges, bunkers, tank traps and barbed wire, this allows completely different battlefield environments to be assembled in minutes, representing everything from Omaha Beach to the outskirts of Paris to the bridge at Arnhem.

Each player picks one side (the German or Allies, usually the Americans but the British or Free French in a few key engagements) and sets up the battlefield as directed by scenario. There are 15 scenarios that come with the game but hundreds more are available for free on Days of Wonder's website (and more still are available through expansions). Some battles will give one side more of an advantage than the other, to better represent historical factors, but the game does try to balance this out over the course of the full campaign. Both sides have access to 3 unit types: infantry, tanks and artillery (there is no air power in the game, but some cards can be used to call in air strikes), which are set up as directed by the scenario.

Each side also has a hand of cards (ranging from 4 to 6 per side varying by scenario). These cards have to be used to order your units into battle. The cards allow careful probes (moving just one unit forward), full-scale assaults or special orders, such as launching massive artillery bombardments, calling in bombing runs or allowing one side to dig in with enhanced defences. This card-driven mechanic both makes the game extremely accessible - each card tells you what to do, with minimal need to refer to the manual - but also somewhat controversial for hardened wargamers who may prefer a rule set that allows you to move every unit once per turn. Legion are the stories of players who've set up the perfect outflanking maneuver down the right flank only to not get a single card for the right flank for five turns in a row, by which time the enemy has moved out of position. This reflects the chaos of the battlefield and the complexities of communicating with the front mid-battle, but some players may find frustrating.

The cards do make the game extremely fast-moving, though. Rather than the many hours a single battle in a more traditional wargame may take, Memoir '44 games rarely take more than half an hour to 45 minutes, allowing several battles to be played through in a single session. This is great for those with more limited time or shorter attention spans.

Memoir '44 is fast, frantic and fun whilst retaining a fair amount of depth. It's a great game for people starting out in board games, and for a focused 2-player game with a reasonable playing time it may have no equal (aside, perhaps, from its fellow games in the Command & Colours rules series, such as BattleLore). The game is also highly modular. If you feel the base game is perhaps a tad simplistic, there are online rules for adding armoured trucks, allowing units to return fire when attacked or even adding aerial units (the older Air Pack is now out of print but a new version, New Flight Plan, will be released in 2019 to readdress this). Official expansion packs add lots of new scenarios and rules, including entire new factions for the British, Japanese and Russian forces (in the Mediterranean Theatre, Pacific Theatre and Eastern Front box sets). The Overlord variant allows up to 8 players to take part in huge multi-sided battles. If you're truly flush with cash, there's even the Equipment Pack which replaces most of the cardboard tokens in the game with miniatures, or online sellers who offer 3D terrain in lieu of the cardboard tiles.

But all of that stuff is strictly optional. The base set by itself still allows for a huge number of games and variety. Memoir '44 is easy to learn, tricky to master and educational in how much detail it goes into with each WW2 battle. It may be the best 2-player boardgame on the market (and certainly the best that can be played in such a reasonable timeframe). Highly recommended.

James
5.0 out of 5 stars Great game!
Reviewed in the United Kingdom on 12 March 2019
Verified Purchase
Bought this game to primarily play with my 8 year old son. (He's a typical 8 year old I guess, loves playing football and would, if we let him, play computer games all day - I wanted him to do something else). It's a bit pricey but having read a number of reviews, thought I would take the plunge - so glad I did, it's a great game.

A nice mix of a little bit of strategy and quite a lot of luck - it's more luck to be honest (which cards you draw and the role of the dice) which means you can play with people who are not big strategy game types. It's simple enough for my son to play and now my wife is loving playing it as well.

The board and game pieces are good quality. It does take a little bit of time to set up and we had to double check a few rules but once you've mastered them, game play is quick and simple.

Mr. C. W. Turner
3.0 out of 5 stars Good game let down price and terrible minatures.
Reviewed in the United Kingdom on 8 October 2020
Verified Purchase
Easy to learn, simple but addictive War game. It is fun to play and creates a fog of war sense of feeling with the use of cards. What I dont like about the game, is the price and the Infantry minatures included. I feel this game is overpriced for what you get. The map is really to small for anything other than small skirmishes. Its wide enough, just not long enough. The Infantry minatures are basically garbage. Poor detail and uninspiring to look at. They can be easily replaced with Airfix minatures, which I have done. But you shouldn't really have to, after forking out £40 for the game. The expansions and add ons are way overpriced to. Makes me think that the Airfix Battles game is actually better value.
Read more
Report abuse

This is a game that Shut Up & Sit Down persistently rave about and has been on my list to try for a long while. I finally picked it up and played a few games with my other half (that has no interest in games that are themed around war) and we both had a great time.

There is a huge luck factor in this game, and a lot of it comes down to the cards that you draw. If you're looking for a more strategic game.. then I suggest looking at a different game.

The setup time for this game can be a little long as well, as sorting tiles to match the missions in the campaign can take a little long.
Read more
3 people found this helpful
Report abuse

Spuder
5.0 out of 5 stars Excellent WW2 game.
Reviewed in the United Kingdom on 6 August 2020
Verified Purchase
Excellent WW2 game. A light wargame easy to teach to non-wargaming players. Lots of expansions that add so much depth to the game. But you don't need the expansions to play and enjoy the game. The game has a strong following including championships. Days of Wonder site is an excellent website that gives players lots of scenarios. Please check out Board game Geek to get better reviews.
Read more
Report abuse
See all reviews
Get FREE delivery with Amazon Prime
Prime members enjoy FREE Delivery and exclusive access to movies, TV shows, music, Kindle e-books, Twitch Prime, and more.
> Get Started
Back to top
Get to Know Us
Make Money with Us
Let Us Help You
And don't forget:
© 1996-2020, Amazon.com, Inc. or its affiliates