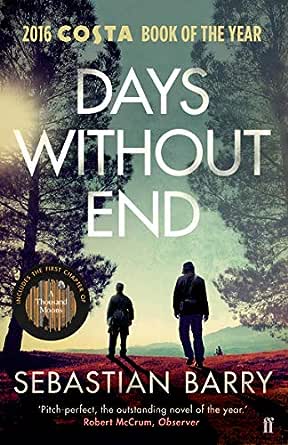 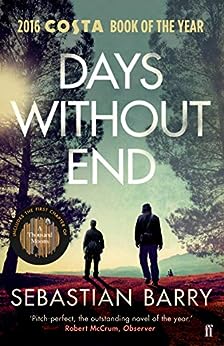 "A haunting archeology of youth . . . Barry introduces a narrator who speaks with an intoxicating blend of wit and wide-eyed awe, his unsettlingly lovely prose unspooling with an immigrant's peculiar lilt and a proud boy's humor. But in this country's adolescence he also finds our essential human paradox, our heartbreak: that love and fear are equally ineradicable."--Katy Simpson Smith, The New York Times Book Review "Days Without End is suffused with joy and good spirit . . . Through Barry, the frontiersman has a poet's sense of language . . . If you underlined every sentence in Days Without End that has a rustic beauty to it, you'd end up with a mighty stripy book."--Sarah Begley, Time "Mr. Barry's frontier saga is a vertiginous pile-up of inhumanity and stolen love: gore-soaked and romantic, murderous and musical . . . The rough-hewn yet hypnotic voice that Mr. Barry has fashioned carries the novel from the staccato chaos of battle to wistful hymns to youth . . . an absorbing story that sets the horrors of history against the consolations of hearth and home." --Sam Sacks, The Wall Street Journal "Alternately brutal and folksy . . . Barry's prose can take brilliant turns without sounding implausible coming out of Thomas's mouth. A mordant vein of comedy runs through the book . . . the 'wilderness of furious death' his characters inhabit has a gut-punching credibility."
--Michael Upchurch, The Washington Post

"McNulty is a lyrical and companionable narrator for this bloody part of America's history."--NPR "A true leftfield wonder: Days Without End is a violent, superbly lyrical western offering a sweeping vision of America in the making, the most fascinating line-by-line first person narration I've come across in years."--Kazuo Ishiguro, Booker Prize winning author of The Remains of the Day and The Buried Giant "Sebastian Barry had me in no uncertain terms from the first sentence and never let up. And he writes like there's no tomorrow--like there are days without end. He navigates the terrain as a master of fictional conventions and sweeps us along in a big picaresque arc that is just the right vessel for his thematic necessities." --David Guterson, author of Snow Falling on Cedars "A tour de force of style and atmosphere . . . Evocative of Cormac McCarthy and Charles Portis, Days Without End is a timeless work of historical fiction."--Booklist (Starred Review) "A lively, richly detailed story . . . A pleasure for fans of Barry and his McNulty stories." -Kirkus Reviews (Starred Review) "Incredible . . . poetic . . . Remarkable . . . A gorgeous book about love and guilt, and duty to family."--Book Riot's "All The Books!" "Days Without End is a work of staggering openness; its startlingly beautiful sentences are so capacious that they are hard to leave behind, its narrative so propulsive that you must move on. In its pages, Barry conjures a world in miniature, inward, quiet, sacred; and a world of spaces and borders so distant they can barely be imagined. Taken as a whole, his McNulty adventure is experimental, self-renewing, breathtakingly exciting. It is probably not ended yet."--Alex Clark, Guardian "A crowning achievement."--Justine Jordan, The Guardian "Barry writes with a gloomy gloriousness: everyone that crosses his pages is in mortal danger, but there's an elegant beauty even in the most fraught moments."--Library Journal "Thomas's first-person narration sings with wonder at the beauty of the world and their place in it . . . Sebastian Barry balances gruesome depictions of massacres, near-starvation and Civil War battles with poetic phrasing and exclamations of joy at the wonders of nature and the gift of life . . . painful and beautiful novel."--Shelf Awareness

"A lyrical, violent, touching book that is a war story, and a surprising love story. . . Barry, the Irish author, presents his tale in language that recalls great American writers, from Walt Whitman to Stephen Crane to Cormac McCarthy . . . Barry's lyrical prose is full of fire and tenderness, violence and compassion, providing a sweeping and intimate vision of America's conquest and its continuing search for identity." --Richmond Times-Dispatch "An absorbing novel... By making all of his characters rounded, full-blooded human beings, [Barry] has accomplished that thing - inclusion, I think we call it now - that art, particularly fiction, does best...The writing is unflaggingly vital; sentence after sentence fragment leaps out with surprises."--The Bay Area Reporter

"Some novels sing from the first line, with every word carrying the score to a searing climax, and Days Without End is such a book. It has the majestic inevitability of the best fiction, at once historical but also contemporary in its concerns ... Days Without End is pitch-perfect, the outstanding novel of the year so far."--Observer "For its exhilarating use of language alone, Sebastian Barry's Days Without End stood out among the year's novels. Epic in conception but comparatively brief in its extent, this brutal, beautiful book also features the year's most beguiling narrator ... A great American novel which happens to have been written by an Irishman."--The Times Literary Supplement "The novel comes close to being a modern masterpiece. Written in a style that is as delicate and economical as a spider's web, it builds to a climax that is as brutally effective as a punch to the gut."--The Times (UK)

"Epic, lyrical and constantly surprising ... a rich and satisfying novel."--Jeff Robson, Independent "A beautiful, savage, tender, searing work of art. Sentence after perfect sentence it grips and does not let go."--Donal Ryan, author of The Spinning Heart, winner of the Guardian first book award

'Pitch perfect, the outstanding novel of the Year.' Observer

After signing up for the US army in the 1850s, aged barely seventeen, Thomas McNulty and his brother-in-arms, John Cole, fight in the Indian Wars and the Civil War. Having both fled terrible hardships, their days are now vivid and filled with wonder, despite the horrors they both see and are complicit in. Then when a young Indian girl crosses their path, the possibility of lasting happiness seems within reach, if only they can survive.

Susan Browne
5.0 out of 5 stars American Western with a Twist
22 December 2016
Format: Kindle EditionVerified Purchase
I wasn't sure what to expect with this book: tales of violence and death in the American West as seen through the eyes of a gay couple.What I found was a beautiful eulogy to the the people that made America what it is today.From the savagery of the Indian Wars to the horrors of the Civil War,the life experiences of Thomas McNulty and John Cole are described with a clear eyed stoicism not unlike the works of Cormac McCarthy.Yet there is a sweetness in the undying love and faithfulness of the main characters that elevates this book to greatness.This is one of the books of the year for me.
Read more
4 people found this helpful
Helpful
Comment Report abuse

MR VICTOR G KINGDOM
5.0 out of 5 stars Sebastian Barry Excels
21 February 2020
Format: Mass Market PaperbackVerified Purchase
Barry, in his inimitable style, captures the awakening U.S.A. perfectly. "Days Without End" is a beautifully crafted adventure of the times, filled with pathos, humour & leaves the reader with a contentment in its characters & their bonding journey. Definitely a MUST READ.
Read more
Helpful
Comment Report abuse

The McBeans
5.0 out of 5 stars Gripping and beautifully written
4 April 2017
Format: Kindle EditionVerified Purchase
Sebastian Barry's novel is a masterpiece of storytelling laid out with the sensibility of a poet. It does not flag at any point.
Read more
2 people found this helpful
Helpful
Comment Report abuse

Kindle Customer
5.0 out of 5 stars Extraordinary not 4 the front hearted but a book I could not put down
2 June 2018
Format: Kindle EditionVerified Purchase
The writing is exemplary. I can't believe it was only shortlisted for the manbooker prize. Should have won absolutely
Unique/sad/ riveting and lifeaffirming

Gary Cassidy
5.0 out of 5 stars Should win the man booker
20 March 2017
Format: Kindle EditionVerified Purchase
Great writing and a compelling yarn interwoven with the injustice and horror brought down upon Native Americans by the US Government.
Read more
Helpful
Comment Report abuse

Stephen Clark
4.0 out of 5 stars Beautiful
6 May 2017
Format: Kindle EditionVerified Purchase
A story of the Wild West via the Ireland of the famine. Excellent language recreating the times and telling the story of Thomas McNulty during the Indian wars and the Civil War. Savagery kept going by love, and love above all is the true subject.
Read more
Helpful
Comment Report abuse

Susan Heatherbell
4.0 out of 5 stars Great Read
9 May 2017
Format: Kindle EditionVerified Purchase
I enjoyed it but what really bugged me was the use of 'would of' and 'could of' instead of have!
Read more
One person found this helpful
Helpful
Comment Report abuse
There are 8 customer reviews and 11 customer ratings.
See all 8 customer reviews
Write a customer review

Go to Amazon.com to see all 293 reviews 4.3 out of 5 stars
Get FREE delivery with Amazon Prime
Prime members enjoy FREE Delivery and exclusive access to movies, TV shows, music, Kindle e-books, Twitch Prime, and more.
> Get Started
Back to top
Get to Know Us
Make Money with Us
Let Us Help You
And don't forget:
© 1996-2020, Amazon.com, Inc. or its affiliates