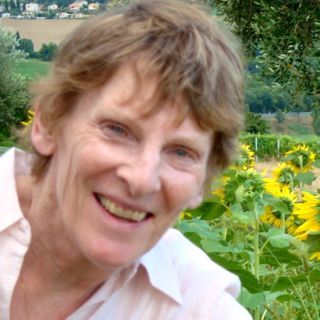 by Maureen Brady (Author)
4.7 out of 5 stars 32 ratings
See all formats and editions
Sorry, there was a problem loading this page. Try again.

Maureen Brady has published four novels, a collection of short stories, and the nonfiction book Daybreak. She teaches creative writing at New York University and the New York Writers Workshop at the Jewish Community Center. She also works as a freelance editor, helping writers across the spectrum take their writing to the next level. She lives in New York City.
Start reading Daybreak on your Kindle in under a minute.

Maureen Brady started this auspicious habit of expressing herself with words by writing the humor column for her Junior High School newspaper, then went on to publish 4 novels, including Ginger's Fire and Folly, and a collection of short stories, as well as the nonfiction Daybreak: Meditations for Women Survivors of Sexual Abuse and Midlife.

Her first novel, Give Me Your Good Ear, was published by Spinsters Ink and The Women's Press in England, followed by Folly, which was excerpted in Southern Exposure and received wide critical acclaim. It was nominated by Adrienne Rich for an ALA Gay Book Award and later reprinted as a classic by The Feminist Press. Her new novel, Getaway, will be released by Bacon Press Books May 1, 2018.

Other recent work has appeared in Sinister Wisdom, Bellevue Literary Review; Just Like A Girl; Cabbage and Bones: Irish American Women's Fiction, Mom, In the Family, and Intersections: An Anthology of Banff Writers. Brady's essays and stories have been nominated for the Pushcart Prize and were finalists for the Katherine Anne Porter Fiction Prize and the Nelsen Algren Short Story contest.

She teaches creative writing at New York University and New York Writers Workshop @​ the Jewish Community Center, and works as a free-lance editor, helping writers across the spectrum take their writing to the next stage.

A founding member of The New York Writers Workshop, she has also long served as Board President of Money for Women Barbara Deming Memorial Fund.

She has received grants from the Ludwig Vogelstein Foundation; New York State Council on the Arts Writer-in-Residence; New York State Council on the Arts CAPS grant; Holding Our Own; Briarcombe Foundation; and The Virginia Center for the Creative Arts Fellowship to The Tyrone Guthrie Centre, Ireland. She was the winner of the Saints and Sinners short story contest for 2015 and is also a Saints and Sinners Hall of Fame winner.

She lives in New York City and Woodstock with her long term partner, Martha, and their joy dog, Bessie.

Amazon Customer
4.0 out of 5 stars Inspiration, hope and comfort
Reviewed in Australia on 31 May 2019
Verified Purchase
A lovely resource for a group or individual looking for discussion starters, inspirational thoughts and comfort.
Read more
Helpful
Report abuse
See all reviews

louise
5.0 out of 5 stars great little life saver
Reviewed in the United Kingdom on 25 March 2013
Verified Purchase
this book was not quite what i was expecting but i was very pleasantly surprised. it contains a 'meditation' for each day of the year, from 'accountability' to 'compassion' and 'taking stock'. great to just pick up when you need a little something to get you through or for when times are a little harder this is a little life-saver (for me anyway). five stars.
Read more
One person found this helpful
Report abuse

Elljaygee
5.0 out of 5 stars A constant comfort
Reviewed in the United Kingdom on 10 March 2015
Verified Purchase
A little bit of daily comfort when processing you past has knocked you to your knees. Keep on keeping on, this book will help you.
Read more
Report abuse

Elsa Paterson
5.0 out of 5 stars Survivor, Not Victim
Reviewed in Canada on 29 August 2010
Verified Purchase
Recently a friend repeatedly raved about this book and talked me into ordering a copy. Years ago I went through some therapy and read everything I could find on the subject of childhood sexual abuse. I thought I knew every aspect of its effects on me personally, and I had little interest in exploring it further. I was stunned when I started looking through this book and realized I had barely scratched the surface of the harms of the abuse, such as the inability to settle down in my own house, difficulty in finishing projects, forced surrender to the whims of others, and distorted relationships.

The author offers solutions and hope as well. From the introduction: "We seek daily inspiration and reminders that we are in a process, moving through recovery, not simply subjecting ourselves to further pain. It is my hope that these meditations can serve sexual abuse survivors both as daily inspiration, and also by showing and celebrating our courage."

I believe this book would benefit survivors of other forms of childhood abuse as well. I recommend it.

Sara
3.0 out of 5 stars Three Stars
Reviewed in Canada on 19 December 2017
Verified Purchase
Good stuff, but very tiny purple book that did not look like this lol.
Read more
Report abuse
See all reviews
Back to top
Get to Know Us
Make Money with Us
Let Us Help You
And don't forget:
© 1996-2021, Amazon.com, Inc. or its affiliates