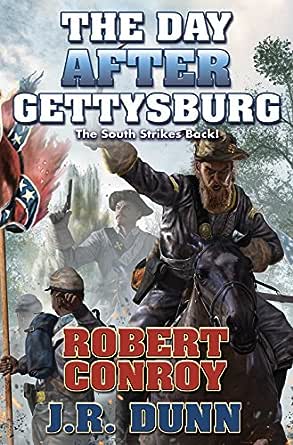 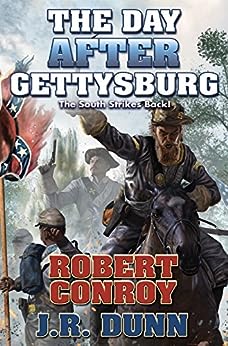 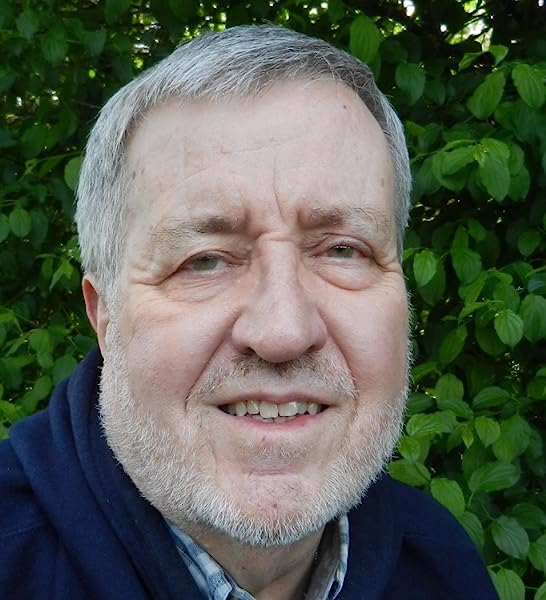 The Day After Gettysburg Kindle Edition

Robert Conroy was the author of a run of hugely popular alternate history novels, including Himmler's War, Rising Sun, 1920: America's Great War, Liberty: 1784, 1864: Custer in Chains, and Germanica for Baen Books. His 1942, which is set within a Japanese conquest of Hawaii, won the prestigious Sidewise Award for alternate histories. Conroy lived for many years in southeastern Michigan. J.R. Dunn is the author of time travel novels This Side of Judgment, Days of Cain--widely hailed as one of the most powerful time travel novels to deal with the Holocaust--and Full Tide of Night. He was the long-time associate editor ofThe International Military Encyclopedia and is now an editor at The American Thinker. His nonfiction appears regularly on Baen.com --This text refers to the hardcover edition.

Ossian the Modeller
4.0 out of 5 stars Not Conroy's best work, but not bad
Reviewed in the United Kingdom on 27 January 2020
Verified Purchase
I have enjoyed Robert Conroy's alternate history novels for several decades, and was sad to learn of his death in 2014. This work, part written by him and completed by J R Dunn, his former editor, returns to the War Between The States, with a PoD just after the Battle of Gettysburg. Lee does not retreat to Virginia, but remains north, living off the land and defeating various Union commanders until Grant takes command and rapidly defeats him. Subplots look at rogue Confederate units committing atrocities against the civilian population - a slightly contrived device to set up the final battle.

As the title says, Conroy has written much better, but this isnt too bad and gave a few happy hours of bedtime reading.

Michael G. Annis
5.0 out of 5 stars Another good read
Reviewed in the United Kingdom on 2 October 2017
Verified Purchase
Having read all of Robert Conroy's new histories this is another good one. Well written, good characters, beileveable action. Well worth the money and an enjoyable read. Thank you.
Read more
Helpful
Sending feedback...
Thank you for your feedback.
Sorry, we failed to record your vote. Please try again
Report abuse

technophile
5.0 out of 5 stars A fitting tribute to a fine author
Reviewed in the United Kingdom on 21 December 2017
Verified Purchase
I love alternate history and have read all of Robert Conroy's books and this is a fine example of the genre with which to end a career. I will miss his books.
Read more
Helpful
Sending feedback...
Thank you for your feedback.
Sorry, we failed to record your vote. Please try again
Report abuse

Sean
2.0 out of 5 stars Two Stars
Reviewed in the United Kingdom on 2 September 2017
Verified Purchase
Not as good as I hoped, seemed predictable, repetitive and plodding in places. I would not recommend
Read more
Helpful
Sending feedback...
Thank you for your feedback.
Sorry, we failed to record your vote. Please try again
Report abuse
Load more international reviews

Roger J. Buffington
4.0 out of 5 stars An Alternate Gettysburg Scenario
Reviewed in the United States on 14 June 2017
Verified Purchase
This one will go down as Robert Conroy's last "Alternate History" novel. I have enjoyed many of Conroy's novels and I like this one a lot. In this scenario (no real spoilers here) President Lincoln prevails upon General George Meade to pursue Robert E. Lee's Army of Northern Virginia after the Union victory at Gettysburg. The result is a Union disaster leaving the Union public to lament that General Meade was "a defender, not an attacker." This novel focuses on what might have happened in this scenario, since in our actual timeline General Meade famously declined to pursue the beaten Lee after the "Pickett's Charge" disaster. The conventional wisdom has always been that this decision by Meade lengthened the war by allowing Lee to recover and regroup. So in this alternate history Lee is firmly ensconced in Pennsylvania, menacing many Union cities including Washington D.C. itself.
Mostly, this novel moves along the plotline smartly. However, in my opinion the novel gets sidetracked repeatedly with little episodes about minor characters who ultimately have little to do with the novel's outcome. This would have been a better novel had it focused more on Lee, Meade, Grant, President Lincoln, and the other major players. It has become popular among authors to imitate Michael Shaara's approach, done to perfection in "The Killer Angels" whereby the author focuses on minor characters as well as the major players. Here, it does not really come off, in my opinion.
Overall an interesting novel and an enjoyable read. RJB.
Read more
20 people found this helpful
Helpful
Sending feedback...
Thank you for your feedback.
Sorry, we failed to record your vote. Please try again
Report abuse

Kindle Customer
3.0 out of 5 stars Unlikely scenerio
Reviewed in the United States on 27 March 2018
Verified Purchase
Under estimates Lee's command ability. While attempting to draw from some history, the author relies on eliminating &/or diminishing numerous key lieutenants. Much unrelated drama while skimming over battle detail that allows for considerable unlikely outcomes. Book is interesting in places, but quite slow in others. Longstreet's defensive genius is mostly overlooked, loss of Stewart diminishes Calvary arm as if inept, ignores any ability to detect Sherman's approach & never explains how Lee's center was evacuated in spite of strong entrenched defenses. Unexplained orders that not even Longstreet would have questioned? I don't think so.
Read more
One person found this helpful
Helpful
Sending feedback...
Thank you for your feedback.
Sorry, we failed to record your vote. Please try again
Report abuse

ilbob
4.0 out of 5 stars pretty good for the genre
Reviewed in the United States on 4 August 2017
Verified Purchase
Conroy is one of my favorite authors in the alternate history genre. This one did not disappoint me, although I gather his editor actually finished the book after the author's passing.

Like alternate history tends to do, it changes one thing in history and then explores what might have been the result. In this case, the change is that Lincoln gets Meade to chase Lee after the battle at Gettysburg causing Lee to attack.

There is lots of decent battle scenes and plenty of political stuff thrown in, along with an attempted assassination of the president by none other than John Wilkes Booth. Much of what is portrayed is at least plausible to me, and that is always important to me in this kind of book.

As the genre goes it is pretty good, although at the end it just sort of ended.
Read more
One person found this helpful
Helpful
Sending feedback...
Thank you for your feedback.
Sorry, we failed to record your vote. Please try again
Report abuse

Craig Valentine
3.0 out of 5 stars Great book but I kept asking
Reviewed in the United States on 20 June 2019
Verified Purchase
In the tent everyone kept chewing on LEE IS BETWEEN US AND WASHINGTON. If I was in the tent my burning question would have been--Washington can look out for itself. Lee can't take it. But what is between us and Richmond? Lee is sitting on a mountain of supplies he is as much a captive of the the supplies as the supplies are a captive of him. Sheridan's force unscathed. The Confederate supply dump somewhere to the south naked of protection. It is a golden opportunity. STRIKE SOUTH. But no one was listening to me.
Read more
Helpful
Sending feedback...
Thank you for your feedback.
Sorry, we failed to record your vote. Please try again
Report abuse
Load more international reviews

Deep Six
1.0 out of 5 stars Not Really Alternate History
Reviewed in the United States on 5 November 2018
Verified Purchase
To say that this book was boring would be to compliment it. Conroy should understand that "Alternate History" means that the end result is different than what history says it was. This book DOES NOT DO THAT. It makes one change and then adds a meaningless side story and continues to fill in the rest with actual history. Perhaps the author should study on how REAL alternate history is written by reading the novels of Harry Turtledove. I have never regretted spending money on a book.........until now. It's a pity that Amazon doesn't have minus ratings.
Read more
Helpful
Sending feedback...
Thank you for your feedback.
Sorry, we failed to record your vote. Please try again
Report abuse

Kindle Customer
5.0 out of 5 stars The day after Gettysburg.
Reviewed in the United States on 25 June 2017
Verified Purchase
Excellent alternative history. The union prevails after pursuing Lee and preventing his escape to Virginia. Totally plausible changes to the historic record make for gripping reading.
Read more
5 people found this helpful
Helpful
Sending feedback...
Thank you for your feedback.
Sorry, we failed to record your vote. Please try again
Report abuse

Teamjj
5.0 out of 5 stars Excellent read, great pick up to close it by Mr. Dunn
Reviewed in the United States on 28 July 2017
Verified Purchase
From my perspective, its a shame Lee didn't follow up after his defeat, but such is life, war, and the basis for an excellent alt history work. The fellow who finished this didn't seem to miss a beat after Mr Conroy passed. Mr Conroy wrote great stuff and he will be missed by those of us who eagerly looked forward to his next work. Prayers for his family.
Read more
3 people found this helpful
Helpful
Sending feedback...
Thank you for your feedback.
Sorry, we failed to record your vote. Please try again
Report abuse

Amethyst64
4.0 out of 5 stars The lost art of proofreading...
Reviewed in the United States on 15 May 2018
Verified Purchase
This was an interesting tale of an alternate ending to the American civil war. It was full of spelling, grammar, and historical errors that should have been caught by a competent proof reader. Without giving away the plot I'd like to mention the Confederate general at Vicksburg was named Pemberton, not Pendleton. Also have to wonder if the author has ever personally examined the Potomac river above the Great Falls?
Read more
Helpful
Sending feedback...
Thank you for your feedback.
Sorry, we failed to record your vote. Please try again
Report abuse