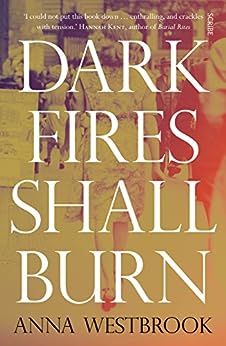 Dark Fires Shall Burn is a superbly atmospheric, powerful debut about justice, vengeance, and the power of grief. --This text refers to the paperback edition.

Anna Westbrook is a Sydney-based writer and critic. She holds a PhD in creative writing and lectures at New York University Sydney. She was shortlisted for the Australian/Vogel Literary Award at the age of twenty-one, and has also been a recipient of an Australian Society of Authors mentorship (where she worked with Fiona McGregor, author of Indelible Ink) and an Australian Poetry Poet in Residence award. Her work appears in publications in Australia, the United States, and France. Dark Fires Shall Burn is her first novel. --This text refers to an out of print or unavailable edition of this title.

This is Anna Westbook’s debut novel. It is set in Newtown, an inner-city suburb of Sydney, Australia, in 1946. The writing of the story was influenced by the real-life murder of an 11-year old schoolgirl named Joan Ginn. The murder was unsolved.

I enjoyed reading this story for a number of reasons. The obvious research of the author into customs, streets, shops, smells and attitudes of life in post-war Newtown where soldiers back from the war prowl the streets and drink in the bars, where prostitutes live and work, where teenage boys and girls slip out of their houses at night and do things their parents are unaware of.

The emotional tracking of grief, of determination, of vengeance, fear and self-preservation is realistic and realistic.

The characters are developed and believable.

Overall, a good first novel, one which will have me looking out for Anne Westbrook’s next book.
Read more
Report abuse
See all reviews
Back to top
Get to Know Us
Make Money with Us
Let Us Help You
And don't forget:
© 1996-2021, Amazon.com, Inc. or its affiliates