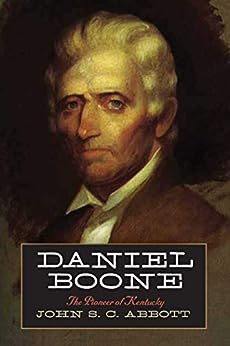 JOHN S.C. ABBOTT (1805-1877) was an American historian, pastor, and writer. He wrote about Christian ethics and is known for his popular History of Napoleon Bonaparte (1855) and for his series on American Pioneers and Patriots, which includes Daniel Boone, Peter Stuyvesant, John Paul Jones, and many more (also available from Cosimo Classics). He was a brother of Jacob Abbott, also writer, and collaborated with him in his Makers of History series. --This text refers to the hardcover edition.

John C. Maldaner III
5.0 out of 5 stars Relive the days of an extraordinary pioneer!
Reviewed in the United States on 6 January 2019
Verified Purchase
A delight to read this book. With quotes from Daniel Boone and his contemporaries sprinkled throughout, this book transported me to a time so different from ours. As a kid, I grew up hearing about the legend of Daniel Boone. This book fills in many details and enriches his legacy.
Read more
Report abuse

Firecracker
5.0 out of 5 stars Loved this biography of Daniel Boone
Reviewed in the United States on 7 May 2020
Verified Purchase
I have always admired Daniel Boone and have read more than most. I learned a lot more about him and greatly admire him.
Read more
Report abuse

Clayton
4.0 out of 5 stars Mr. Boone was 5ft 6in tall but no man has ever stool taller than Daniel Boone
Reviewed in the United States on 19 December 2018
Verified Purchase
Daniel Boone once told a companion a friend that in all his travels he "has never been lost, a bit confused a few times but never lost"
Read more
Report abuse

Kindle Customer
5.0 out of 5 stars Fact Is Better Than Fiction
Reviewed in the United States on 4 May 2017
Verified Purchase
Before I read this all I knew of Daniel Boone came from the television series of the 60s. Now that I've read this his life was more interesting than what I saw on tv.
Read more
One person found this helpful
Report abuse

Kindle Customer Glen......
4.0 out of 5 stars Daniel Boone....
Reviewed in the United States on 7 May 2017
Verified Purchase
Great synopsis of his early life...then following through with a fantastic chronicle of his life's work...Well done Mr.S. C. Abbott
Read more
One person found this helpful
Report abuse
See all reviews
Back to top
Get to Know Us
Make Money with Us
Let Us Help You
And don't forget:
© 1996-2021, Amazon.com, Inc. or its affiliates