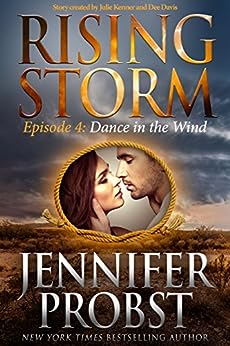 Welcome to Storm, Texas, where passion runs hot, desire runs deep, and secrets have the power to destroy… Get ready. The storm is coming.

During his time in Afghanistan, Logan Murphy has endured the unthinkable, but reentering civilian life in Storm is harder than he imagined. But when he is reacquainted with Ginny Moreno, a woman who has survived terrors of her own, he feels the first stirrings of hope.

4.9 out of 5 stars
4.9 out of 5
14 global ratings
How are ratings calculated?
To calculate the overall star rating and percentage breakdown by star, we don’t use a simple average. Instead, our system considers things like how recent a review is and if the reviewer bought the item on Amazon. It also analyses reviews to verify trustworthiness.

John S.
5.0 out of 5 stars My favorite of the series so far...
Reviewed in the United States on 28 December 2015
Verified Purchase
This was my favorite of the series so far. Not a lot happened in the book really, but story did move along nicely. Or at least it didn't feel like a lot happened, but when I review the book right now, there actually was a lot. But it didn't feel like it.

I think what I most liked was all the character moments in the book. Every plot point seemed to come out of a place of honesty to the characters.

This is the first book in which we get to be inside Logan's head a bit and Jennifer Probst did a wonderful job of describing what it must be like for a veteran to come back from a war zone. I have no experience of this, except what some friends of mine tell me, and it sounds very true to life. I like that we get to understand him in a way that most of the other characters probably do not yet.

His burgeoning romance with Ginny was lovely to watch unfold. It felt really nicely paced, and I like that both of them are a bit wounded and wanted to talk it over with their families before committing to anything. They are both very mature, which is really refreshing to read for younger characters. I especially enjoyed their shared bond of having survivor's guilt. I think they might become the most stable couple in Storm. And while on a televised soap, that would be the kiss of death, I think it could actually be a good thing in this book soap. Of course there is still one big secret that Ginny is hiding.

That secret, the paternity of Ginny's child, had a pretty major revelation in this book. I won't spoil it for those that haven't read it yet, though. I do like how it came out, in a scene between Payton and Francine. That is also a lovely relationship that is blossoming.

Of course, in true soap opera form, someone overheard said secret. Luis. Ginny's brother. This adds another layer of suspense simply because someone else knows about it. Add in the fact that he is family makes it even juicier. And it gave us a lovely meta moment where Luis feels like he's caught up in a crazy soap opera. I do love a good meta moment in things, and I give big kudos to Jennifer Probst for how seamless she wove that one in.

I highly recommend this book. You could read it as a standalone book and you'd be fine, but it is definitely better to read it as part of the series. You'll get more out of it that way.
Read more
Report abuse

Elizabeth Clinton
5.0 out of 5 stars So Many Secrets In Storm
Reviewed in the United States on 15 October 2015
Verified Purchase
WOW,WOW,WOW That is what Storm Texas is all about. This is part four of this series and what I can say is the Secrets,Lies,and All the Sordid Steamy happenings are just getting more intense and the build up is getting so over the top that it has you on the edge of your seat.
The families in Storm are so intertwined and everyone's story is so intriguing that it keeps you coming back for more.
Each part of this series is written by a different author but the authors even though their styles are different they have created a series that is so incredible that it keeps you coming back for more and has yourself asking when is the next part.
If you are looking for a series that will have you gasping out loud, maybe yelling at your e-reader at times but will definitely leave you intrigued this is the one you want to read
Read more
Report abuse

Tammy Miller-Devlin
5.0 out of 5 stars There is hope for a happy ending?
Reviewed in the United States on 15 October 2015
Verified Purchase
In this part of the story I had my first HOLY CRAP moment. In Dance in the Wind, Jennifer Probst had my mouth wide open with some every interesting information about Jacob and him being the baby's father. I do love how Jennifer has given Ginny another chance at happiness.
The town finally has something to celebrate with the homecoming of Logan Murphy from war. But as the towns people gather at the Murphy Pub to celebrate. You see how everyone is trying to do the right thing. But with people having sex and backstabbing each other it makes for a very interesting read. At the end of this part of the story you are looking to see how many day till the next book comes out.
Read more
Report abuse

dirobbo
5.0 out of 5 stars There are still dramas but love is blossoming between different couples
Reviewed in the United States on 1 November 2015
Verified Purchase
Jennifer Probst has brought another level to this series. She has brought some life back into the town of Storm.

There are still dramas but love is blossoming between different couples. There is still drama there but it has taken a back seat to the love blooming.

Can't wait to see where this town will go in the next few stories.

I was given a copy of the book in exchange for an honest review - Naughty Book Eden.
Read more
Report abuse
See all reviews
Back to top
Get to Know Us
Make Money with Us
Let Us Help You
And don't forget:
© 1996-2022, Amazon.com, Inc. or its affiliates