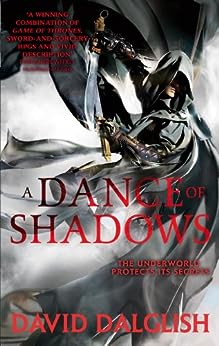 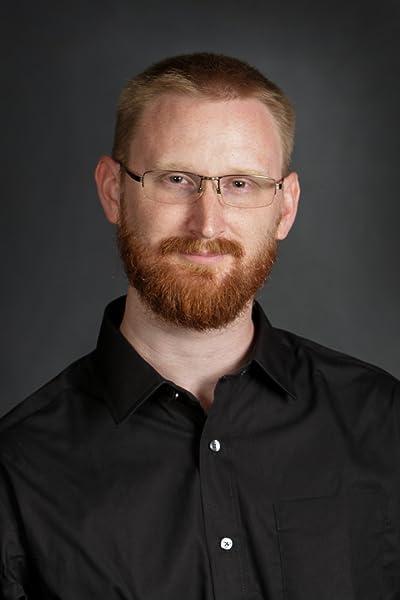 A Dance of Shadows: Book 4 of Shadowdance Kindle Edition

by David Dalglish (Author) Format: Kindle Edition
See all formats and editions
Sorry, there was a problem loading this page. Try again.

'Prove that you can stand against the darkness and live'

Haern is the King's Watcher, born an assassin only to become the city of Veldaren's protector against the thief guilds.

When Lord Victor Kane attacks the city, determined stamp out all corruption, foreign gangs pour in amidst the chaos in an attempt to overthrow the current lords of the underworld.

And when a mysterious killer known as the Widow begins mutilating thieves, paranoia engulfs the city. Haern knows someone is behind the turmoil, pulling strings. If he doesn't find out who - and soon - his beloved city will burn.

Light or darkness: where will the line be drawn?

Fantasy author David Dalglish spins a tale of retribution and darkness, and an underworld reaching for ultimate power in this fourth novel of the Shadowdance series, previously released as Blood of the Underworld.

Dalglish is well on his way to join the ranks of Peter V. Brett and Brent Weeks as influential authors in a new generation of fantasy ― FANTASY FACTION

Dalglish concocts a heady cocktail of energy, breakneck pace and excitement that a reader could get drunk on -- Sam Sykes, author of TOMB OF THE UNDERGATES

A winning combination of A Game of Thrones, sword-and-sorcery RPGs, and vivid description . . . The point of view shifts continually, encompassing bit players and major characters from every angle of the struggle, and Dalglish handles his cast of thousands with aplomb . . . this is a fun read. Dalglish puts familiar pieces together with a freshness and pleasure that are contagious ― PUBLISHERS WEEKLY --This text refers to the paperback edition.

Fast, furious and fabulous - Michael J. Sullivan, author of THEFT OF SWORDSDalglish is well on his way to join the ranks of Peter V. Brett and Brent Weeks as influential authors in a new generation of fantasy - FANTASY FACTIONDalglish concocts a heady cocktail of energy, breakneck pace and excitement that a reader could get drunk on - Sam Sykes, author of TOMB OF THE UNDERGATESA gritty book with intriguing characters and has a plot which will keep you hooked till the end - FANTASY BOOK CRITICA winning combination of A Game of Thrones, sword-and-sorcery RPGs, and vivid description . . . The point of view shifts continually, encompassing bit players and major characters from every angle of the struggle, and Dalglish handles his cast of thousands with aplomb . . . this is a fun read. Dalglish puts familiar pieces together with a freshness and pleasure that are contagious - PUBLISHERS WEEKLY --This text refers to the paperback edition.

The fourth novel in an electrifying new fantasy series of thieves and assassins from bestselling author David Dalglish - perfect for fans of Brent Weeks. *Previously released as Blood of the Underworld* --This text refers to the paperback edition.

David Dalglish currently lives in rural Missouri with his wife Samantha, daughter Morgan and dog Asimov. He graduated from Missouri Southern State University in 2006 and currently devotes himself to perfecting his craft. He spends his free time playing racquetball and watching PBS with his daughter. --This text refers to the paperback edition.

David Dalglish currently lives in Myrtle Beach with his wife Samantha, and daughters Morgan, Katherine and Alyssa. He graduated from Missouri Southern State University in 2006 with a degree in Mathematics and currently spends his free time dying for the umpteenth time in Dark Souls. --This text refers to the paperback edition.
Read more

David Dalglish graduated from Missouri Southern State University in 2006 with a degree in Mathematics. He's self-published over fifteen novels, as well as had twelve books traditionally published through Orbit Books and 47North.

He also has a lovely wife and three beautiful daughters, with all four being far better than he deserves.

Amazon Customer
5.0 out of 5 stars Many a sleepless night
Reviewed in Australia on 22 October 2016
Verified Purchase
This series is near impossible to put down, considering the genre is nothing like my usual preference. Highly rated. A must read for sure.
Read more
Helpful
Report abuse
See all reviews

Paul Tapner
4.0 out of 5 stars The widow's quiver
Reviewed in the United Kingdom on 8 July 2018
Verified Purchase
Book four in the 'Shadowdance' series of fantasy novels. All about an assassin who protects a city. This is not a jumping on point, so new readers should start with book one 'a dance of cloaks'.

This, as usual, does feature some strong language and violence so is only suitable for grown up readers.

It runs for 437 pages. Has a prologue. Thirty seven chapters. Then an epilogue.

There is a map of the land in which the story is set at the start.

This starts a little while after the end of book three, and in this one Haern now finds some new threats to his city. A lord, long absent from the city, returns home, with an army of mercenaries, determined to stamp out the guilds once and for all. The latter won't go down without a fight though.

Haern's father has his own plans. And an old acquaintance to deal with.

There's a surprise reunion or two for Zusa and Alyssa.

And a new killer in the city known only as the widow.

The streets are about to erupt once again. Can the city be saved once more?

Four books in, but this does manage to keep up a very good standard, and for the most part it's a real page turner. Very readable prose and good action scenes make it fly by very nicely keeping you gripped. It is impressive how many narrative strands it deals with, giving all the characters a good bit of attention, and how much emotional intensity it manages as well when things get hard for them.

It does stand on it's very well, and also manage to be part of something bigger, as becomes clear later on. It just falters ever so slightly in the final quarter when it adds perhaps one thing too many to the juggling, and thus the focus goes slightly.

But nevertheless, this is still another enjoyable read in a very good series, and I look forward to book five.
Read more
Report abuse

Amazon Customer
5.0 out of 5 stars A thrilling read!
Reviewed in the United Kingdom on 24 December 2016
Verified Purchase
I thoroughly enjoyed this book, I thought the new characters gave a lot of interest to the story, and I'm intrigued to see what happens next. I couldn't fault the intensity of the story telling so I wanted to give this book a 5 star rating.
I would recommend this book to anybody who likes to see the characters grow and adapt to change, and to anyone who likes fantasy novels.
Read more
Report abuse

Granny Stardust
5.0 out of 5 stars A good read
Reviewed in the United Kingdom on 29 August 2014
Verified Purchase
I bought every booked published by this author who does write incredibly well. As with all eBooks in my possession there are typos and misspellings which ought not to be there. Also I'm a fast reader and think some books could have been put together. At times it felt like buying episodes rather than a chunky book. However I will buy more books as they are published because the author is talented and tells a good tale. A good read.
Read more
Report abuse

phil
4.0 out of 5 stars Interesting
Reviewed in the United Kingdom on 27 February 2015
Verified Purchase
I started reading David's books starting with book one and I really enjoy the the many build up of all the characters without needing to remember to many,I hope this ends in a way that would lead me on to the ork books which if the conclusion to this story ends well ,i will have to read
Read more
Report abuse

D. S. Hughes
4.0 out of 5 stars I believe it’s a good book
Reviewed in the United Kingdom on 26 November 2019
Verified Purchase
Bought as a gift, so can’t really comment. I know the recipient very much enjoyed the first book in the series which is why I bought this one.
Read more
Report abuse
See all reviews
Back to top
Get to Know Us
Make Money with Us
Let Us Help You
And don't forget:
© 1996-2021, Amazon.com, Inc. or its affiliates