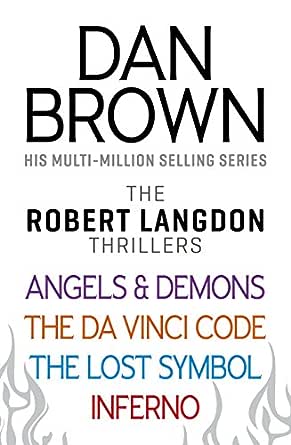 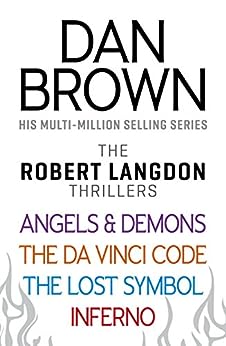 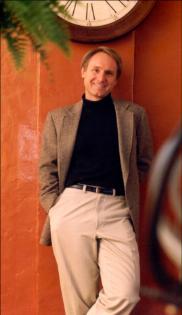 For the first time, all four Robert Langdon thrillers are now available as one ebook bundle.

If you haven't read a Dan Brown yet, now's the time.

ANGELS AND DEMONS
The countdown to oblivion has started - who will stop the clock?
A famous scientist is found dead, a mysterious symbol burned into his skin.
Many miles away in Rome, the world’s cardinals gather to elect a new pope. Little do they know that beneath their feet, a vast bomb has started to tick.
Professor Robert Langdon must work out the link between these two seemingly unconnected events if he is stop the Vatican being blown sky high.

THE DA VINCI CODE
The race to uncover the oldest secret has begun . . .
An eminent man is brutally murdered in the world’s most famous museum. Around his body are a ring of codes, hastily drawn in blood.
He died to protect a long-kept secret which Professor Robert Langdon must now uncover. It will be a race against time to decipher this final message. Can he get there before the killers do?

THE LOST SYMBOL
To save a life, you must first crack the code . . .
A mysterious invitation brings Professor Robert Langdon to Washington DC. But all is not as it seems in this powerful city. An ancient organization plans to reassert itself. And he is the only man standing in its way.
If he is to prevent a terrible plan being executed, Langdon must decipher a series of increasingly bloody clues. But first he has to make sure he stays alive . . .

INFERNO
The world is in danger - who will save it?
Robert Langdon wakes up in a Florence hospital with no clue how he got there.
But another attack on his life makes it very clear – someone wants him dead. And fast.
To survive, Langdon must work out who it is. And then he must answer the next question – why?

jannie
5.0 out of 5 stars All in
Reviewed in Australia on 25 November 2019
Format: Kindle EditionVerified Purchase
Great read enjoyed having the bundle as I could just read on as though I were reading one massive volume.
Love his characters very much a page turner!

Mrimpact
5.0 out of 5 stars Riveted to each page
Reviewed in Australia on 4 March 2019
Format: Kindle EditionVerified Purchase
A great follow up in an amazing trilogy really. It’s easy to imagine many things, with far more considered possible, when you are given more knowledge in such perfect form.
Read more
Helpful
Comment Report abuse

Jared Mclean
5.0 out of 5 stars I like this author
Reviewed in Australia on 13 February 2018
Format: Kindle EditionVerified Purchase
Half way through and loving it
Read more
Helpful
Comment Report abuse
See all reviews from Australia

E E Ward
5.0 out of 5 stars A great read!
Reviewed in the United Kingdom on 2 March 2020
Format: Kindle EditionVerified Purchase
This series of books are a great read.
Read more
Helpful
Sending feedback...
Thank you for your feedback.
Sorry, we failed to record your vote. Please try again
Report abuse