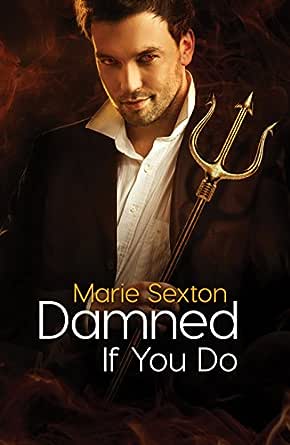 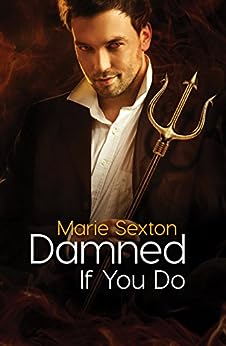 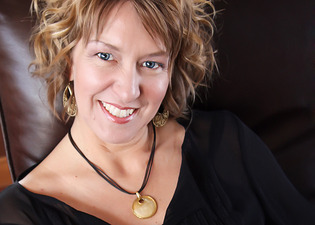 Damned If You Do Kindle Edition

The path to temptation is paved with a hellish amount of paperwork.

Soul acquisition is a drag, but if Abaddon doesn’t catch up on his quota, he could be demoted to scooping poop for the Hounds of Hell. With a deadline hanging over him, he heads for the Bible Belt, looking for the perfect combination of sweetness and challenge.

Seth is a blind musician, part of a traveling tent revival. He’s cute, mystically talented, and quotes the Bible at every turn. His soul is pure enough to fill Abaddon’s quota for months to come, and Abaddon is determined to claim it.

The problem? There’s the revival foreman who watches Abaddon’s every move. Then there’s the mystery of Seth’s many unusual talents. Lastly, there’s Abaddon himself. He’s beginning to like Seth a bit too much. Maybe Seth deserves something better than damnation.

But Hell’s agenda isn’t negotiable, and time is running out. If Abaddon doesn’t play his cards right, he could condemn both of them to the worst fate of all—an eternity apart.

Warning: Contains a Bible-quoting twink and an irreverent devil. Also, snakes. Lots and lots of snakes.

This title was previously published by Samhain. It has been re-edited, but the content is unchanged.

Marie Sexton's first novel, Promises, was published in January 2010. Since then, she's published nearly thirty novels, novellas, and short stories, all featuring men who fall in love with other men. Her works include contemporary romance, science fiction, fantasy, historicals, and a few odd genre mash-ups. Marie is the recipient of multiple Rainbow Awards, as well as the CRW Award of Excellence in 2012. Her books have been translated into six languages. Marie lives in Colorado. She's a fan of just about anything that involves muscular young men piling on top of each other. In particular, she loves the Denver Broncos and enjoys going to the games with her husband. Her imaginary friends often tag along. Marie has one daughter, two cats, and one dog, all of whom seem bent on destroying what remains of her sanity. She loves them anyway. Marie also writes dark dystopian fantasy under the name A.M. Sexton. You can contact her at msexton.author@gmail.com, or find her on Facebook and Twitter.

There was so much more to Seth than was on the surface and there was more to Abaddon too.

Abaddon did just enough at his job to squeak by, but that lazy work ethic was catching up to him. He was giving a deadline and of course he decided to try to find a soul that would fill his quota for as long as possible. Seth was the perfect choice.

Seth's soul seemed as pure as they come and Abaddon knew if he managed to get him to give it up, he'd be set for a very long time. The problem was, Seth was so devote that Abaddon couldn't find a way to tempt him. The longer amount of time he spent with Seth, he wasn't sure he wanted to - which surprised no one more than Abaddon himself.

It's been a while since I've read anything by Marie Sexton, but this little story reminded me that I need to check out more of her books.

Howie Bing
4.0 out of 5 stars Read it on KU, then bought a copy to keep
24 August 2018 - Published on Amazon.com
Verified Purchase
This book gets my ultimate stamp of approval: After reading it for free on KU, I spent money to buy a copy for myself.

As I read, there were a couple of words that kept coming to mind:

Fable - That's what I'd call this story, with its tone perfectly balanced between light and dark, fantasy and realism, humor and potential tragedy.

Chutzpah - As I read, every once in a while I'd pause for a moment to marvel. The author built a light-hearted (yet serious) romance between a devout Christian and a demon from the depths of Hell. I wouldn't have thought it was possible to convincingly create a gay MC who's a true-blue, dyed-in-the-wool Christian evangelical... but isn't suffering a crisis of faith; isn't battling homophobia, external or internalized; isn't ashamed, or broken, or self-loathing; isn't oppressed by his fellow believers; and doesn't need to reject or reevaluate his faith in order to find true love and happiness.

The ingenuity it took to make the love story work was impressive. So were the consistency of tone and the quality of the writing. Normally I avoid stories featuring devout believers of any stripe, but this won me over completely. The only thing I'd read previously by this author was her debut novel, Promises. I didn't much like it, so I'm not sure exactly how I came to pick this one up. But I'm glad I did.

Eric Alan Westfall
5.0 out of 5 stars If you like a funny, heart-warming love story...you found it.
22 June 2016 - Published on Amazon.com
Verified Purchase
Yet again with a stupid set of choices to describe any plot. Hopefully it's the equivalent of a "captcha." That said:

Damned—you should pardon the expression—if Ms. Sexton didn't do the latter to me. I was at the kitchen table when that part "hit," so, fortunately there was a kitchen towel available for the mopping up.

You should read it.

SandyC
4.0 out of 5 stars 4 1/2 stars!
29 April 2018 - Published on Amazon.com
Verified Purchase
Loved this book; it's alternately funny as Hell (pun intended!), poignant, and sweet. I couldn't help but laugh at the descriptions of Hell (mountains of paperwork, always overflowing in boxes, dealing with copiers from 1986, apartments with one window that looked out on a brick wall, waiting 22 hours to get a form signed, etc.!). Absolutely hilarious! Oh, and the chapter titles are the best, like this one: "Cock-Blocked By Darth Vader"! But then there was the growing relationship between Abaddon and Seth, the way Seth's soul shined so brightly, and Abaddon's utter reluctance to take it from him after they got to know each other a little more. I won't spoil what happensl please read it!
Read more
One person found this helpful

Anne Shure
5.0 out of 5 stars I needed Kleenex for this one
30 April 2019 - Published on Amazon.com
Verified Purchase
I recently became a reader of this author’s works, and each one has been a delight. This one was no exception. Abaddon made for an excellent narrator, and this author’s vision of Hell was fantastic—and completely relatable. I loved the slow unfolding of Seth and Abaddon’s relationship, as well as Abaddon’s awakening. And I wouldn’t mind a spin-off story for Zed. All in all, a really great book. If only it were longer! (Note that it ends at the 90% mark, to accommodate a sample of Winter Oranges...which might end up being my next Marie Sexton read!)
Read more
Go to Amazon.com to see all 27 reviews 4.5 out of 5 stars
Get FREE delivery with Amazon Prime
Prime members enjoy FREE Delivery and exclusive access to movies, TV shows, music, Kindle e-books, Twitch Prime, and more.
> Get Started
Back to top
Get to Know Us
Make Money with Us
Let Us Help You
And don't forget:
© 1996-2020, Amazon.com, Inc. or its affiliates