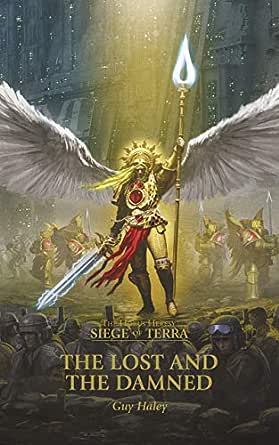 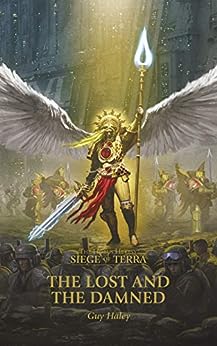 The Solar War is over. The Siege of Terra has begun. As the Traitors unleash their deadliest weapons, the defenders of the Throneworld face nightmare and plague – but Terra must stand.

READ IT BECAUSE
Discover the lengths to which Horus will go to claim Terra as his own – and the horrors he is willing to set upon its defenders.

THE STORY
On the thirteenth day of Secundus, the bombardment of Terra began. With the solar defences overcome through the devastating strength of the Traitor armada and the power of the warp, Horus launches his assault on the Throneworld in earnest. After withstanding a ferocious barrage of ordnance, an immense ground war commences outside the Palace with every inch gained paid for in the lives of billions. The front lines are beyond horrific and the very air is reduced to poison and blood. Bodies are thrown into the meat grinder but the outer redoubts cannot possibly hold for long, even with the loyal primarchs to reinforce them. For Horus has his own generals to call upon. Between the plague weapons of Mortarion and the fury of Angron, the defenders face a losing battle.

Guy Haley is the author of the Horus Heresy novels Titandeath, Wolfsbane and Pharos, the Primarchs novels Konrad Curze: The Night Haunter, Corax: Lord of Shadows, Perturabo: The Hammer of Olympia, and the Warhammer 40,000 novels Dark Imperium, Dark Imperium: Plague War, The Devastation of Baal, Dante, Baneblade, Shadowsword, Valedor and Death of Integrity.

Kid Kyoto
3.0 out of 5 stars Siege of Terra 2: The Padding
2 January 2020 - Published on Amazon.com
Verified Purchase
I stopped following the Horus Heresy series when it became clear the series has no end in sight and would be padded out as long as there was money to be made. More than 10 years and 50 books later it seems I made the right call. But I've come back for the Siege of Terra and... more padding.

The first book, Solar War had a system-wide battle and planet-shattering action. In this book... the forces of Chaos advance 10 feet towards the walls of the palace. OK, maybe it was more like a mile or two, but you get the idea. Guy Haley does the best he can within the limitations of the editorially-mandated outline (his author's statement reads like an apology) by creating well-developed defenders and attackers. There are heroic pilots, frightened conscripts and barbaric beastmen all brought to life to participate in this ultimate battle, and the trip is enjoyable enough. A Night Lord meets his final fate, we see more of Horus' fall and loss of self, we get some horrors of trench warfare.

But in the end... the enemy advances ten feet. A particular low point is when Sanguinius and Angron face off near the end, scowl at each other and then both go home to fight another day.

I'm not sure how many more books are planned for Siege of Terra. I had planned to follow to the end but if the next book is as pointlessly padded as this one I may bow out. If you're on the fence and if you're not a completist, this book can probably be skipped, or at least wait for a cheaper paperback.
Read more
4 people found this helpful

Chris S
5.0 out of 5 stars Once you start reading you will not want to stop
23 October 2019 - Published on Amazon.com
Verified Purchase
This is what us as 40k Horus Heresy fans have been waiting for. I was almost scared to read this book fearing it would not live up to the hype of what I had pictured inside my head from my 21+ years of playing and reading 40k stories and fluff. Once I started reading I could not put the book down.

The action is fast paced and jumps around a lot, but Haley makes it work as he describes the seige on a massive scale seen through the actions and thoughts of many different characters, from the lowly conscripts just given las rifles and put on the front lines as cannon fodder for the Emperor, to heretic guardsmen and beastmen also sent in as cannon fodder for Horus, to the fighter pilots protecting the skies over the palace, to the Primarchs themselves.
Even though the majority of the primarchs are present, both good and bad, Sanguinius is at the forefront and he has the most "air time" of them all, which I truly enjoyed as he is my favorite of them all. One of the best scenes in the book is Sanguinius taking flight over the entirety of the imperial palace and his thoughts, you truly get a feel for the scale of it all through his eyes..
This book is only the start of the siege with more to come, and I for one can not wait for the next book
Read more
4 people found this helpful

Dani
5.0 out of 5 stars The tragic extent of my failings
18 October 2019 - Published on Amazon.com
Verified Purchase
This book truly encompasses the misery and horror and the sheer mind numbing scale of the war that engulfed Terra during the last year of the Horus Heresy. Every page is like a drug, you need more, you need to keep reading, there's much more to explore, there's much more to experience. The magnificence of Sanguinius is always a fantastic addition to nay book. I can't wait for the next one, how lovingly close the misery of the 41st millennium truly is.
Read more
6 people found this helpful

Jetpack
5.0 out of 5 stars Another great book on the Siege
2 November 2019 - Published on Amazon.com
Verified Purchase
So far, the Siege has really seen the A game of the authors. Another great story with Katsuhiro as our stand in to show us what this misery is like for a non-genetically altered trans-human. And spoiler, it's not good.

Mix in some primarchs (Hello Angron!), an Alpha shout out and you have a great WH30K book.

Must, must get.
Read more

24mech
5.0 out of 5 stars Great Book as expected
6 November 2019 - Published on Amazon.com
Verified Purchase
Great read. Could not put it down and didn't want to be bothered on anything while i was reading this. great battles and great conversations and character flow.
Read more
Go to Amazon.com to see all 19 reviews 4.5 out of 5 stars
Get FREE delivery with Amazon Prime
Prime members enjoy FREE Delivery and exclusive access to movies, TV shows, music, Kindle e-books, Twitch Prime, and more.
> Get Started
Back to top
Get to Know Us
Make Money with Us
Let Us Help You
And don't forget:
© 1996-2020, Amazon.com, Inc. or its affiliates