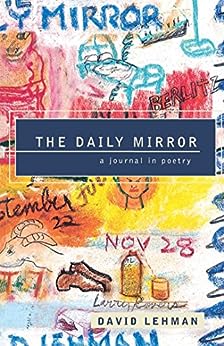 Billy Collins Catullus said never a day without a line, but David Lehman has raised the stakes to a poem a day. The result is The Daily Mirror, a lively calendar of the life of a poet -- daily improvisations that are entertaining, touching, and always bubbling with the fizz of contemporary life.

James Tate The Daily Mirror is a spirited, poetic romp through the days -- sexy, energetic, jazzy, and just plain fun. Lehman has made this "daily poem" idea very much his own. This book is bursting with life. It's an irresistible force.

Yusef Komunyakaa The Daily Mirror reads like a sped-up meditation on the elemental stuff that we're made of: in this honed matrix of seeing, what's commonplace becomes the focus of extraordinary glimpses when these everyday images are juxtaposed into a mental geography made engaging by gazing into the daily mirror.

Carolyn Kizer I admit to being wildly envious of David Lehman's book. Imagine! A poem a day, and really good, charming, personal poems, too! Only the late William Stafford even came close to this accomplishment. Every place and person Lehman mentions is given a boost toward literary immortality.

Mark Strand I can think of no book of poems written in recent years that is nearly so entertaining as The Daily Mirror. It is the work of a quick mind unflustered by the Big Apple. Its wit is dazzling, its charm constant, its immediacy refreshing. It is, quite simply, a terrific read. --This text refers to an alternate kindle_edition edition.

David Lehman, the series editor of The Best American Poetry, is also the editor of the Oxford Book of American Poetry. His books of poetry include Poems in the Manner Of, New and Selected Poems, Yeshiva Boys, When a Woman Loves a Man, and The Daily Mirror. His most recent nonfiction book is Sinatra’s Century. He teaches at The New School and lives in New York City and Ithaca, New York. --This text refers to an alternate kindle_edition edition.

Tuan Nguyen
5.0 out of 5 stars my kinda poetry
Reviewed in Germany on 1 December 2013
Verified Purchase
You want me to review books for free to pump Amazon, and then required me to at least write these many words?!
Incre-diablo!
Read more
Report abuse

Rachel Barenblat
5.0 out of 5 stars Absolutely fantastic!
Reviewed in the United States on 15 December 1999
Verified Purchase
I am not surprised that "The Daily Mirror" is fantastic. I have yet to meet a poem by David Lehman that I don't like.
That being said, I'm still deeply pleased by how much I like this book. These poems are so full of joie de vivre that every time I read one I find myself smiling.
The poems in "The Daily Mirror" are terrific in part because of their immediacy. As daily poems they comprise a kind of poetic journal; they are crafted out of the everyday. What's great is that they also transcend the mundane; they're made of ordinary stuff, but they're *poems*, with the heightened consciousness and precise language that poems require.
These poems are witty and intelligent and creative and funny and sad. I recommend them highly.
Read more
23 people found this helpful
Report abuse
See all reviews
Back to top
Get to Know Us
Make Money with Us
Let Us Help You
And don't forget:
© 1996-2021, Amazon.com, Inc. or its affiliates