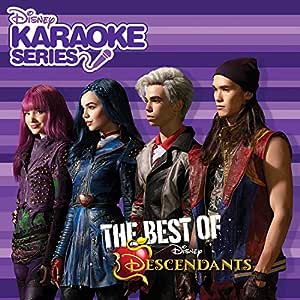 Jellybean
5.0 out of 5 stars Songs from BOTH Descendants movies.
26 December 2017 - Published on Amazon.com
Verified Purchase
My daughter and I both love this karaoke cd. Half are songs from Descendants 1 and half from Descendants 2. CD works great in a karaoke machine and words displayed fine on the connected TV with each singers portion in a different color. Great gift for the Descendants fan!
Read more
14 people found this helpful

Lele jen
4.0 out of 5 stars Would be a 5 star but...
27 October 2017 - Published on Amazon.com
Verified Purchase
Would be 5 star but, when i purchased it, it had advertised that it qualified for the mp3 autorip feature through amazon. After purchasing and waiting the 48hrs it never showed and after talking to mutltiple Amazon reps, they told me it was "never" offered, eventhough the site at the time and the email confirmation stated otherwise. Over all though, he CD comes from a few songs from both movies. A bit dissapointed that rotten to the core instrumental isnt fully instrumental it has Sofia Carson singing the chorus, so that throws my kiddo off. Other than that pretty decent.
Read more
One person found this helpful

Nicole P - Seattle
4.0 out of 5 stars This is not a Descendants 2 disc - it's for the first movie
20 September 2017 - Published on Amazon.com
Verified Purchase
The disc is fine - has instrumental/karaoke version of each song, as well as the versions with vocals. Includes CD-G data that displays the lyrics on a karaoke machine. The kids love it!

This would be a five-star review if not for the fact that the listing image shows Descendants 2. Be aware that this disc is from the first Descendants movie, NOT the sequel.
Read more