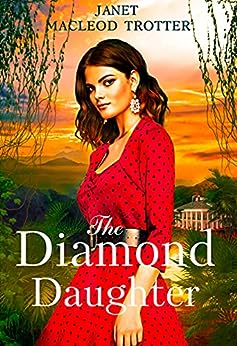 by Janet MacLeod Trotter (Author) Format: Kindle Edition
See all formats and editions
Sorry, there was a problem loading this page. Try again.
In this emotional story set in 1946 post-war India, can a woman’s quest for love survive shocking secrets and betrayal?

Filled with excitement and a little trepidation, Jeanie Munro is returning to India and her husband Mungo, having been forced apart from him by the long years of the Second World War. She has high hopes of helping him with his new role as headmaster of the prestigious Nicholson’s School in the idyllic setting of Murree in the foothills of the Himalayas. Together, they can start their longed-for family. But post-war India is in a ferment of change and the undercurrents of tension begin to disturb their tranquil outpost. Still grieving for her beloved brother, killed in action in the recent war, Jeanie – vivacious and optimistic by nature – tries to make the most of her new life. But after serving in the Anti-Aircraft Brigade during the war, she is no longer the biddable, naive young wife who left India in 1939 and finds life at Nicholson’s restrictive and lonely. Despite Mungo disapproving of them, her only true friends are the Lomaxes, a family haunted by scandal and owners of the glamorous Raj Hotel in Rawalpindi. Invited to the Raj for an Anglo-Indian wedding, Jeanie finds escape and enjoyment among this vibrant mixed-race community – and is especially drawn to handsome, fun-loving Rick – but knows that duty must not allow their mutual attraction to grow. Then, just as Jeanie is becoming reconciled to her lot, explosive, long-buried secrets come to light that shake her world to the core – and leave her facing the hardest decisions of her life.
THE DIAMOND DAUGHTER is the third and final novel in THE RAJ HOTEL SERIES.

Praise for The Raj Hotel Series:

“A compelling read set against a most atmospheric backdrop…another splendid read.” —Swirl and Thread

"Kept me on the edge of my seat, wanting to know what was going to happen, so that I ended up staying up way too late because I was completely caught up in this story, never have I gotten lost in a book and then realized that it was almost one in the morning, and then hating to have to put the book down, knowing that I really should go to bed and get some sleep." —Sky's Book Blog

"Janet Macleod Trotter is an amazing author and I will never forget these two books. Th emotion she brings to the page is outstanding. The audio narration brought the books alive and I could see India in my mind’s eye through her wonderful descriptions. I also learnt a lot about the war in India and am keen to learn more ... I would highly recommend you either read or listen to this series. They were truly amazing!" —Audiobook Reviewer

More about The Raj Hotel Series

In post-World War I India, the Raj Hotel is a charming and vibrant backdrop to the hopes and dreams of those seeking a fresh start. But in the heat and intensity of a country undergoing great change, the residents of the Raj Hotel will be swept up in the turbulence of these dangerous and momentous times. Love, loyalty and friendship will be tested to their utmost. Lives will be transformed – but there will be heartache and betrayal too. Amid the faded grandeur of the hotel, with the world changing irreversibly around them, will friends and lovers find their dreams dashed or fulfilled?

Praise for The Raj Hotel Series:

"A compelling read set against a most atmospheric backdrop...another splendid read."-Swirl and Thread

"Kept me on the edge of my seat, wanting to know what was going to happen, so that I ended up staying up way too late because I was completely caught up in this story, never have I gotten lost in a book and then realized that it was almost one in the morning, and then hating to have to put the book down, knowing that I really should go to bed and get some sleep."-Sky's Book Blog

"Janet Macleod Trotter is an amazing author and I will never forget these two books. Th emotion she brings to the page is outstanding. The audio narration brought the books alive and I could see India in my mind's eye through her wonderful descriptions. I also learnt a lot about the war in India and am keen to learn more ... I would highly recommend you either read or listen to this series. They were truly amazing!"-Audiobook Reviewer

Janet MacLeod Trotter is the author of numerous bestselling and acclaimed novels, including The Hungry Hills, which was nominated for the Sunday Times Young Writer of the Year Award, The Tea Planter's Daughter, which was nominated for the Romantic Novelists' Association Novel of the Year Award, and In the Far Pashmina Mountains, which was shortlisted for the RNA Historical Romance of the Year Award. Her novels have been translated into nine different languages. Much informed by her own experiences and fascinated by family links between Scotland and India, MacLeod Trotter travelled in India as a young woman. Find out more about the author and her novels at www.janetmacleodtrotter.com. --This text refers to the paperback edition.

British author Janet MacLeod Trotter has had 24 books published, 19 of them historical family dramas. Her India-set novels, such as THE RAJ HOTEL SERIES, were inspired by the discovery of a treasure-trove of long-lost family diaries, letters and cine films left by her grandparents who had lived and worked in Northern India from the 1920s to the '50s. 'Reading their frank and intimate words brought my grandparents vividly and poignantly alive for me, long after their deaths.' Janet first went to India herself on an overland bus at the age of 18, eager to see the land where her grandfather had been a forester and her mother had spent her childhood. Her INDIA TEA SERIES, set in Britain and India, has proved hugely popular. THE TEA PLANTER'S DAUGHTER (the first in the series) was nominated for the RNA Romantic Novel of the Year and was an Amazon top ten best seller. It has gone on to be a best-seller in translation, including in Russian, French, Italian and Spanish.

Janet's second novel in THE INDIA TEA SERIES, THE TEA PLANTER'S BRIDE is set in 1920's Scotland and India was particularly influenced by her grandparents' depiction of life in the Punjab (they married in Lahore) and the Himalayan foothills where they trekked. 'Even my mother, as a small baby,' said Janet, 'was hoist in a pram on poles and carried with the rest of the baggage!'

The third novel in the series, GIRL FROM THE TEA GARDEN, follows the family into the Second World War - some of it was inspired by a more recent trip to the foothills of the Himalayas to discover where Janet's mother had lived as a child. The fourth and final novel, SECRETS OF THE TEA GARDEN, is set in the dying days of the British Raj and Indian Independence.

Speaking of her new series, THE RAJ HOTEL, Janet says, 'I have returned to the Punjab where my grandparents began married life for the setting of THE EMERALD AFFAIR - from the glamour of Rawalpindi's garrison town to the lawless tribal areas of the North West Frontier. And in the follow-up novel, THE SAPPHIRE CHILD, the action also takes place in Kashmir - a place that captured my heart as an eighteen year old!'

Janet's storytelling has brought recognition: her first historical novel, THE HUNGRY HILLS, was nominated for the Sunday Times Young Writer of the Year Award, while IN THE FAR PASHMINA MOUNTAINS was shortlisted for the RNA Historical Romantic Novel of 2019.

She has written for teenagers and numerous short stories for women's magazines, some of which are published in an ebook anthology ICE CREAM SUMMER. She has been a columnist and reviewer for The Newcastle Journal and editor of The Clan MacLeod Magazine. Her childhood memoirs of Durham and Skye in the 1960's, BEATLES & CHIEFS, was featured on BBC Radio 4's Home Truths.

She is a member of the Romantic Novelists' Association and The Society of Authors.

Find out more about Janet and her novels at www.janetmacleodtrotter.com

4.5 out of 5 stars
4.5 out of 5
149 global ratings
How are ratings calculated?
To calculate the overall star rating and percentage breakdown by star, we don’t use a simple average. Instead, our system considers things like how recent a review is and if the reviewer bought the item on Amazon. It also analyses reviews to verify trustworthiness.

Christine
5.0 out of 5 stars Terrific
Reviewed in Australia on 9 December 2021
Verified Purchase
Having enjoyed the first two books in this series, I was keen to follow through. Not a bit disappointed either! Mungo proved to be a pompous, misogynistic hypocrite (or rather the author described him so well I thoroughly disliked him), while Jeanie, Clara, Rick and all the other characters proved to be simply human with both good and bad points. An interesting read neatly ended.
Read more
Helpful
Report abuse

Amanda Ginsberg
5.0 out of 5 stars Delightful family saga
Reviewed in Australia on 5 January 2022
Verified Purchase
I so enjoyed the three books in this series about the British in India prior to Indian independence. The atmosphere, customs and characters were appealing and interesting. A great read during Covid lockdowns. Thank you Janet Macleod Trotter.
Read more
Helpful
Report abuse

Debbie
5.0 out of 5 stars A fabulous story
Reviewed in the United Kingdom on 30 November 2021
Verified Purchase
I have read most of this lady’s books. They are always fantastic story’s, full of believable characters, and wonderful descriptions of the scenery and the people of countries they are based in. They have also educated me on lost of bits of history I knew very little about.
Read more
One person found this helpful
Report abuse

Chez
5.0 out of 5 stars A True Gem
Reviewed in the United Kingdom on 15 November 2021
Verified Purchase
5 stars for a brilliant conclusion (??) to an epic saga of lost and found love, of individuals and family ... all set amongst the jewels of India and Scotland. Highly recommended x
Read more
One person found this helpful
Report abuse

Jules
5.0 out of 5 stars Brilliant
Reviewed in the United Kingdom on 16 November 2021
Verified Purchase
Loved this book and the storyline is just fantastic and I didn’t guess the way it would turn out which is always a bonus. Thank you for writing this .
Read more
One person found this helpful
Report abuse

L.P.
5.0 out of 5 stars Another book that is hard to put down.
Reviewed in the United Kingdom on 4 January 2022
Verified Purchase
This brings together in a fascinating way all the threads of the books in the series. So descriptive you can imagine the scenes. Sensitively and beautifully written the story unravels in a way you don’t expect and finishes in a happy ending.
.

Aidan Tasker
5.0 out of 5 stars A brilliant author. Buy it!
Reviewed in the United Kingdom on 9 January 2022
Verified Purchase
Janet's novels are a joy to read. Fully researched and twists in the story lead to compelling reading. Diamond Daughter is no exception. Strongly recommended.
Read more
Report abuse
See all reviews
Back to top
Get to Know Us
Make Money with Us
Let Us Help You
And don't forget:
© 1996-2022, Amazon.com, Inc. or its affiliates