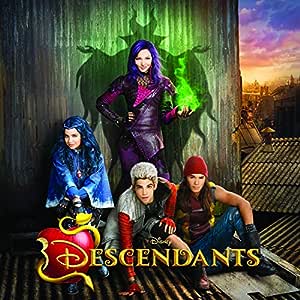 The movie's soundtrack showcases a broad range of music -- from the opening number, a pulsating electronic dance song "Rotten to the Core," and the percussion dance number "Did I Mention?" written by Grammy® and Emmy® Award winner Adam Schlesinger, to the stirring ballad "If Only" written by Adam Anders ("Glee") and performed by Dove Cameron, and the finale anthem "Set It Off." It also features a hip-hop a capella take on "Be Our Guest" (from Disney's "Beauty & the Beast") and the showstopper, a comedic Broadway-esque tune "Evil Like Me" written by Tony® Award nominee Andrew Lippa (Broadway's "The Addams Family," "The Wild Party") and performed by "Descendants" stars Kristin Chenoweth and Dove Cameron. A bonus track reprises "Rotten to the Core" performed by the movie's Sofia Carson.

BunkerVA
4.0 out of 5 stars I hate it, but apparently it's great.
28 September 2017 - Published on Amazon.com
Verified Purchase
This cd was for my 8yo Decendants-obsessed daughter. She loves it, as evidenced by its playing on repeat for days on end. Yes, I want to be evil like you, Maleficent, and crack the cd in half. But I digress. The 4* rating is because a couple of the songs are not apparently the originals from the movie and one isn't only inspired by the movie. Aside from that (which I hear every time she plays it), it's great.
Read more
One person found this helpful

LibraryLady23
5.0 out of 5 stars Perfect.
31 March 2017 - Published on Amazon.com
Verified Purchase
"If Only" is my favorite song followed by "Rotten to the Core." BooBoo Stewart and Dove Cameron, I have noticed, are the really noticeable voices on the the shared songs, but it was an awesome album. "Did I Mention" is fun. I'm not too happy with "Be Our Guest," but you win some, you lose some. I can't wait for the 2nd movie. I loved how they included songs from the little short TV show that hadn't even come out when the movie did.
Read more
One person found this helpful

PDX Ford Gal
5.0 out of 5 stars My Descendant fan kiddos LOVE the soundtrack
24 January 2019 - Published on Amazon.com
Verified Purchase
Most of the movies targeted towards kids I have a hard time getting into. But the Descendants series is very entertaining and the soundtrack is one that we listen to often. Definitely recommend if you are a fan of the movies!
Read more
One person found this helpful

turtley78
5.0 out of 5 stars A must if you love the movie
25 September 2019 - Published on Amazon.com
Verified Purchase
My kids love the music from these movies and having the CD is a great way to sing along. They also love that the words are written in the CD book including who is singing so they can learn those details.
Read more

Carolyn
5.0 out of 5 stars We love singing along
6 October 2017 - Published on Amazon.com
Verified Purchase
My 7 years old son loves all things Descendants. And I'm all for anything to keep his ears innocent.
Read more
2 people found this helpful
Go to Amazon.com to see all 291 reviews 4.8 out of 5 stars