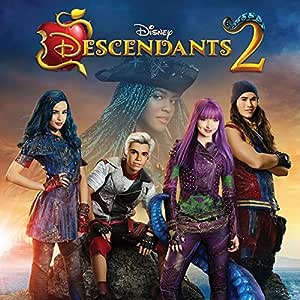 "Descendants" (2015) is the fifth most watched movie in cable TV history in Total Viewers (12.2 million) and has reached well over 100 million Total Viewers worldwide. Its videos on Disney's YouTube channels have amassed over one billion views. The "Descendants" soundtrack topped the Billboard 200 album chart in its first week of release and also ranked No. 1 on Billboard s Soundtrack, Children's, Digital Album and Top Albums charts. The album was also No. 1 on the iTunes Album Overall and Soundtrack charts.

***kv***
2.0 out of 5 stars Good songs but bad quality
17 October 2019 - Published on Amazon.com
Verified Purchase
When the package arrived and the CD case was completely broken, but I do not mind. And when I opened the case, the bottom part came off!!! The CD is perfect condition, It has every song from the movie plus 3 other Disney songs sung by the cast. My daughter loves it! It is very entertaining and catchy tunes. We love having the book included with the words to all the songs. These kids can sing, and the soundtrack is so fun. These are a lot closer to what I would hear on the radio than typical Disney songs. I bought this because we watched the movie and my daughter loves the songs so I figured she'd like to listen exclusively to the songs and I was right. This has been on repeat in the car since we purchased it. Compared to the first soundtrack this is below par in production. Auto tune is used way too much and it dulls the vocals and the music. The songs are great in their own right and I've yet to see the film. I enjoy the music, the vocals, and the cast. After we have it for a week, it could not play like normal anymore, so we just play on the ipad instead since we could download it.
Read more
8 people found this helpful

Arleen
5.0 out of 5 stars Excellent Beyond My Expectations!!!!
24 July 2017 - Published on Amazon.com
Verified Purchase
I ABSOLUTELY LOVE this soundtrack as much as I still love the D1 soundtrack. My fave song is Space Between - a beautiful duet with Dove and Sofia. I have to be honest, with just 2 teaser songs released before D2 premiered and a list of the songs/singers, I was not impressed and did not anticipate being a big fan of the soundtrack. Of course I still had to own it! And that was a great decision, because I can't stop listening to it!!! If you are a Descendants fan, this is a must-have!!! And I love how most of the songs have multi singers, giving all of the main characters a chance to perform. And yes, China is fabulous as she has always been!!!
An Adult Descendants Fan

P.S.- Mine, and I hope all, came with an adorable lyrics booklet with gorgeous pictures! Way to go Disney!!!1

OxoGin
5.0 out of 5 stars I love it and the kids I sit love it 😍
11 October 2017 - Published on Amazon.com
Verified Purchase
I am almost 30 and I am so crazy obsessed with this soundtrack it's just adorable and amazing lyrics, it brings me back to my "That's So Raven, Sister-Sister, Jet Jackson, Even Stevens, Boy Meets World & yes, even Lizzie McGuire" Days!--Made in the 80s, but still love the classic Disney movies, in a die hard Disney fan and I have always voted to watch Disney over all the other crap that's on these days that the kids watch. Plus these beautiful up and coming singers/actors, omg what talent: China Anne McLain, what an exceptional young lady you've turned out to be, and that voice, girl keep singing! Dove Cameron, just as well, beautiful, believable actress and can sing outstanding. Your father is proud of you no doubt. And Sofia Carson, born near my home town! Awesome Florida born girl, you are so gifted as well what a gorgeous voice you have and I love your acting! I babysit friends kids and it's a MUST to listen to this CD and watch the moves! I'm glad the kids have good young women role models, thank you for this amazing cd! Keep it up Disney! Xoxo
Read more
4 people found this helpful

CatMarcs
5.0 out of 5 stars Great soundtrack for all ages
13 November 2017 - Published on Amazon.com
Verified Purchase
Ok so we love the Descendants around here but regardless of that, the music is just plain catchy and makes you move. We love the familiarity and new twists on old favorites. From toddler to his sister, Mom and Dad, it gets us tapping or dancing everytime it’s on. We haven’t tired of it yet and don’t think we will. Going between both movies soundtracks will keep variety.
Read more
One person found this helpful

Amazon Customer
5.0 out of 5 stars Great music! MP3 is Amazon download only
21 August 2019 - Published on Amazon.com
Verified Purchase
Love the music . Good quality and a great selection of songs including "Kiss the Girl" and "Poor Unfortunate Souls". My only disappointment was that the MP3 version that is advertised as free with the cd purchase is only available on your Amazon music devices. We only own a cheap little mp3 player and cant find a way to download the music to it.
Read more
Go to Amazon.com to see all 207 reviews 4.7 out of 5 stars