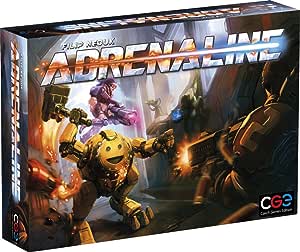 Czech Games Edition Adrenaline plays a first-person shooter on your gaming table. Grab some ammo, grab a gun and start shooting. Build up an arsenal for a killer turn. Combat resolution is quick and diceless. And if you get shot, you get faster. In the future, war has left the world in destruction and split the people into factions. The factions have decided to stop the endless war and settle their dispute in the arena. A new virtual bloodsport was created. Every faction has a champion, every champion has a chance to fight and the chance to win.

JDMofo
5.0 out of 5 stars Excellent deathmatch shooter board game
Reviewed in the United Kingdom on 23 March 2017
Verified Purchase
This might be the best board game ever. A deathmatch shooter in a box. Loads of weapons, loads of action, quick turns and simple to play. The only complexity comes from each weapon having a different effect which means you'll be passing around the 'weapons manual' to begin with. But once you've read the description of a particular weapon the symbols on it's card will be enough to remember what it does.

It's great that when you die you just respawn straight away, you don't lose your weapons or ammo or anything. Also each time you die you are worth less points next time so it stops one person getting picked on.

If you like board games you should have this one!

Vikki
5.0 out of 5 stars Great fun
Reviewed in the United Kingdom on 8 December 2017
Verified Purchase
This game is brilliant. Advice? Watch a video of the rules rather than read them, it's much easier to work out what you're doing on the first game. But really, this is a cracking game.
Read more
Helpful
Sending feedback...
Thank you for your feedback.
Sorry, we failed to record your vote. Please try again
Report abuse

JWG
4.0 out of 5 stars Fun FPS-style game, but too long.
Reviewed in the United States on 26 February 2017
Verified Purchase
Adrenaline is a game in which each player tries to wound and kill other players, and therefore gain the most victory points. The scoring system is clever, as it rewards both making a kill shot and wounding multiple players. Each time a player is killed, they are worth fewer points the next time that they are killed, though, so it makes target selection slightly more difficult than a no-brainer. There are also some bonus points for who got the most kills. There are four maps utilizing two sides of two boards, and recommended layouts for number of players. The maps feel just about the right size, although I can't comment on the three-player version.

There are three spawn points on each map (almost everything is in threes in this game), which hold three weapons each. There are also ammo refills on most squares on the board. A player can Grab, Move, or Shoot each turn, so the first turn or two is usually spent Grabbing stuff. Players can hold at most three weapons and can have up to three each of three different ammo "types" (really just colors). Each weapon does something different - there are no duplicates - and choosing the right weapon for the given board and players is key. When you Grab a weapon, it is loaded, and becomes unloaded when you Shoot it. At the end of your turn you can spend ammo to reload it, so each weapon can only be fired once per round.

Adrenaline is a pretty good representation of an FPS as far as weapon variety and maps go, but plays much more slowly. "Of course it does - it's a board game!", you might say. While it is fun, and I plan on playing it several more times, it can actually bog down a bit. The problem is the weapons. There are too many weapon effects that target multiple players, and in specific ways like, "Exactly one square away", or "Not closer than two squares away". It leads to players calculating the "exact right move", which of course means downtime. I think that if every player knew all the weapons and just concentrated on causing carnage, the game could be a bit faster. As it is, I haven't had a game go less than 90 minutes with four or five players. I doubt it could be a sub-60 minute game, which it really needs to be.

Pros:
Fun representation of an FPS.
Good variety of weapons.
Clever scoring mechanic.
Miniatures and most components are well-made.
All players are in it until the end, and can have an impact on who wins.

I would recommend this game, as it can be very fun (who doesn't like Shotgunning a virtual representation of their friend in the face, which knocks them back, then Tractor Beaming them right back to you and shooting them again?), but it's not perfect. It seems like it has decent replayability, and indeed, it gets better the more you play it as knowledge of the weapons and boards helps a great deal.
Read more
10 people found this helpful
Helpful
Sending feedback...
Thank you for your feedback.
Sorry, we failed to record your vote. Please try again
Report abuse

steve
5.0 out of 5 stars Awesome!
Reviewed in the United States on 8 February 2017
Verified Purchase
Really fun FPS board game. Plays just like an FPS on a tight map, you run around, collect guns and ammo, and lay into your enemies. As you damage them they get stronger. You get points for putting damage on opponents, bonus points for a kill shot, and diminishing returns on killing the same enemy twice. Not deep, but there is some strategy planning out moves to shoot someone, then head towards an ammo crate to refill. There are something like 20 different weapons in the game which is an excellent variety of long range, AOE, and melee weapons. Game plays in about an hour, your first plays will take a bit longer as you learn about all the weapons and weigh whether or not you should pick up a new one or blast someone in the face.
Read more
5 people found this helpful
Helpful
Sending feedback...
Thank you for your feedback.
Sorry, we failed to record your vote. Please try again
Report abuse

Russell J Fyock
4.0 out of 5 stars Great game, cheap cards.
Reviewed in the United States on 13 February 2017
Verified Purchase
Almost five stars. The game itself is a absolute gem and a great addition to anyone's collection. The minis are very nicely done as well. The cards them seem to be less sturdy then what's normal or is expected from board games . That's the only reason this didn't get five stars. For something that's consistently being handled in a game you expect some thing more sturdy and not so flimsy.
Read more
7 people found this helpful
Helpful
Sending feedback...
Thank you for your feedback.
Sorry, we failed to record your vote. Please try again
Report abuse
Load more international reviews

Christopher Backhaus
5.0 out of 5 stars Fun fast paced game
Reviewed in the United States on 1 May 2017
Verified Purchase
Great gateway game to area control mechanisms. Plays fast. I almost never play beyond the 5 round 1st time play through rules, as I'm constantly teaching new people. Just gently encourage your analysis paralysis friends that the fun of the game is not thinking things through for the "best" move, but really just shooting everything that moves to keep the pace flowing quickly.
Read more
4 people found this helpful
Helpful
Sending feedback...
Thank you for your feedback.
Sorry, we failed to record your vote. Please try again
Report abuse

robotfan
5.0 out of 5 stars Great Game
Reviewed in the United States on 29 January 2019
Verified Purchase
Not just a great game but great customer support. I wanted to buy extra components and they sold them to me for a very reasonable price. The game itself is a LOT of fun. My group has played it about a dozen times since I purchased it. The production value is very high and well worth the price tag. Works as a family game (for the most part) and with your regular board game group. Highly recommend.
Read more
Helpful
Sending feedback...
Thank you for your feedback.
Sorry, we failed to record your vote. Please try again
Report abuse

Kimberly Roldan
5.0 out of 5 stars “First person shooter” board game
Reviewed in the United States on 18 December 2017
Verified Purchase
Excellent game. Like a first person shooter, board game. There is a large learning curve (I always suggest watching on Youtube if you can find a tutorial for the board game THEN reading the instructions), but once you get past that then you are ready to rock.
This is a unique game because as your character dies/ gets shot at- you actually get stronger.

Recommended for the intermediate board gamers.
Read more
Helpful
Sending feedback...
Thank you for your feedback.
Sorry, we failed to record your vote. Please try again
Report abuse

Brianna
5.0 out of 5 stars Great board game
Reviewed in the United States on 4 May 2019
Verified Purchase
This game is so fun to play! We got this as a gift for my bil because he is a avid board gamer and he was thrilled! We of course had to play it with him, it was a very interactive game; and very interesting experience to play a shooting game outside a gaming console. I would definitely recommend!
Read more
Helpful
Sending feedback...
Thank you for your feedback.
Sorry, we failed to record your vote. Please try again
Report abuse

Russell Malo
5.0 out of 5 stars This game is a BLAST!
Reviewed in the United States on 5 April 2017
Verified Purchase
Super fun, and once you get used to all the iconography, super fast.

This is the game you want to bust out when you just want to frag each other. Little down time on this one. Just run around, grab ammo, and blast away with a HUGE variety of weapons. You get taken down, you're back up in seconds to return the favor!

Game looks awesome and honestly feels like a FPS video game being played out on your table.
Read more
Helpful
Sending feedback...
Thank you for your feedback.
Sorry, we failed to record your vote. Please try again
Report abuse