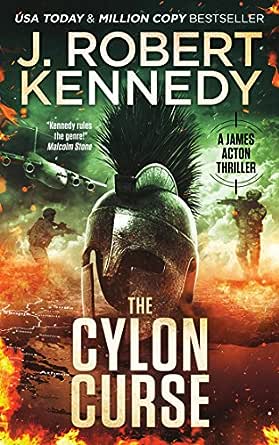 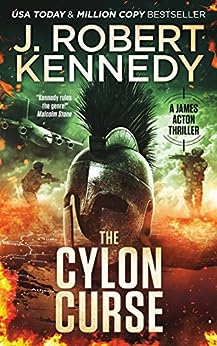 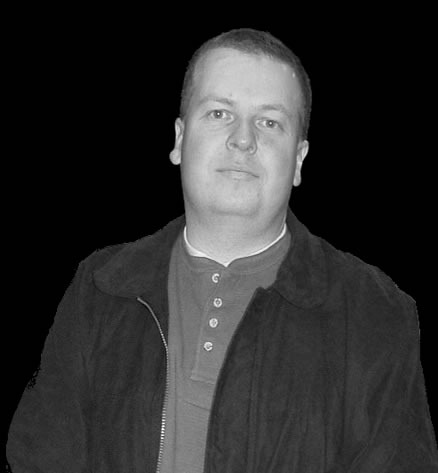 IN 632 BC, ONE MAN ATTEMPTED TO STOP THE BIRTH OF DEMOCRACY.
AND TODAY, THE INNOCENT WILL PAY ONCE AGAIN FOR HIS ACTIONS.

When the Oracle of Delphi urges Olympic hero Cylon to stage a coup and seize control of Athens, he immediately attempts to fulfill her prophecy, but as history has recorded, not all went according to plan.

Almost three thousand years later, Archaeology Professor James Acton and his wife, Laura Palmer, are invited to one of the greatest discoveries in decades, an ancient burial mound outside Athens, Greece. But their invitation is issued under false pretenses, and they soon find themselves embroiled in a mystery that quickly erupts into catastrophic violence, leaving an even deeper puzzle that must be solved before more innocent lives are lost.

From USA Today and million copy bestselling author J. Robert Kennedy comes The Cylon Curse, the latest installment in the action-packed globe-spanning James Acton Thrillers series, certain to leave you burning through the pages until the exciting conclusion. If you enjoy fast-paced adventures in the style of Dan Brown, Clive Cussler, and James Rollins, then you’ll love this thrilling tale of archaeological intrigue.

Get The Cylon Curse today, and discover the history behind one of the most famous names from Ancient Greece, and how his actions still have consequences millennia later.

Though this book is part of the James Acton Thrillers series, it is written as a standalone novel and can be enjoyed without having read any other installments.

With over one million books sold, USA Today bestselling author J. Robert Kennedy has been ranked by Amazon as the #1 Bestselling Action Adventure novelist based upon combined sales. He is the author of over forty international bestsellers including the smash hit James Acton Thrillers. He lives with his wife and daughter, and writes full-time.

Julie Johnson-begg
TOP 500 REVIEWER
5.0 out of 5 stars Must read for fans of the Acton Series
19 August 2018
Format: Kindle EditionVerified Purchase
What can I say but yet another ripper yarn from the master of this genre
Read more
Helpful
Comment Report abuse
See all 1 customer reviews
Write a customer review

J. Prince
5.0 out of 5 stars Another great read
20 May 2019 - Published on Amazon.com
Format: Kindle EditionVerified Purchase
I have now read all of the Acton series, and think this is one of the best. It has history, the Actons, Delta Team, and all of our favorite characters, another archaeological dig site, bad guys, and more. Being a Stargate fan, I especially liked the reference to the show in a scene near the end, as well as Battlestar Galactica. I did have one little quibble, though, when Laura screamed at one point. She's such a strong woman and has seen so much action throughout the books that I don't think she would do that.
Read more
2 people found this helpful

Chief
5.0 out of 5 stars If you are into Ancient Greece history tied into today’s suspense read this book.
13 August 2018 - Published on Amazon.com
Format: Kindle EditionVerified Purchase
You can tell that Mr. Kennedy does his homework. He puts in a lot of time researching his books. If he is not sure about something he goes to people in the area he needs help with. His books are historically correct. The books keep you on the edge of your seat. I had trouble putting this one down. I really enjoy Clive Cusslers Dirk Pitt novels, but James Acton is the best, he always seems to get into trouble just doing his job. I highly recommend this book.
Read more
2 people found this helpful

GJW
5.0 out of 5 stars It just keeps getting better and better!!!
31 July 2018 - Published on Amazon.com
Format: Kindle EditionVerified Purchase
JR they just keep getting better and better. I am going to put it out their and say - this one is my favorite (so far). And, that is saying a lot since I am a Templer addict and have enjoyed your contribution to that historical, mythical world. I always enjoy your final synopsis of how your hit on a story line and the one provided in The Cylon Curse was especially interesting since I am also a fan of the early Battlestar series. I learned something new about the series and bit of history. So glad you had the entire Acton crew share the last few chapters. Thanks again for a terrific, out of the ball park read. G Wire
Read more
2 people found this helpful

Janice Mann
5.0 out of 5 stars Get ready for a thrilling adventure!
29 July 2018 - Published on Amazon.com
Format: Kindle EditionVerified Purchase
Wow! Another great read from one of my favorite authors! This book is an exciting page-turner that will keep you reading late into the night. James and Laura are back, with their friends coming to their rescue once again, and the chase is on! No spoilers here, but I will say that there is an added bonus at the end that will thrill you. My only regret is that I now have to wait for the next one! Thanks again, JRK!
Read more
One person found this helpful

Steve Stranz
5.0 out of 5 stars The Acton series is one of the most entertaining and enjoyable series I have read
4 August 2018 - Published on Amazon.com
Format: Kindle EditionVerified Purchase
Having read all of Robert Kennedy's books I am never surprised that next one is even better . Cylon Curse is a great story with James Acton and Laura stumbling into trouble once again. Most all of their friends are there too and the interaction is nothing but entertaining. If you like the mystery of Greek history you will love this book.
Read more
Go to Amazon.com to see all 20 reviews 4.9 out of 5 stars
Get FREE delivery with Amazon Prime
Prime members enjoy FREE Delivery and exclusive access to movies, TV shows, music, Kindle e-books, Twitch Prime, and more.
> Get Started
Back to top
Get to Know Us
Make Money with Us
Let Us Help You
And don't forget:
© 1996-2020, Amazon.com, Inc. or its affiliates