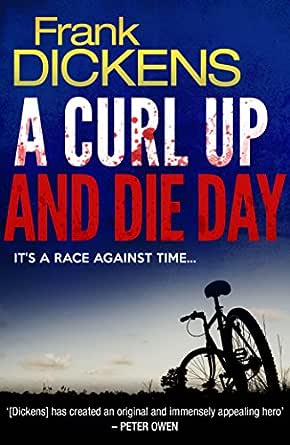 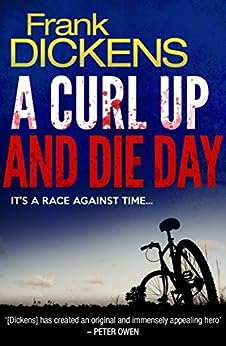 A Curl Up and Die Day Kindle Edition

The heat is on…

Dicks is a cycle-racing fanatic, a former rider whose career ended abruptly at the Rome Olympics when he got the worst of an argument with Lars Pederson, a 22- stone Swedish shot-putter.

In Spain for the world championships thirteen years later, Dicks meets Pederson again — and his new wife Ingrid, a Scandinavian blonde who threatens to distract even the most committed enthusiast from the events on the circuit.

When a Russian cyclist disappears, and the Pedersons seem to know more than they are telling, Dicks finds himself swept along by a tide of events more fast-moving and more dangerous than any cycle race.

In A Curl Up and Die Day the background of northern Spain and the cycling championships is strikingly realised in an emotional and gripping tale.

Frank William Huline Dickens (born 2 February 1932) was born in Hornsey, London. Dickens left school at sixteen and began working for his father, a painter-decorator. A self-taught artist, he began working as a cartoonist in 1959 and has since won eight 'Cartoonist of the Year' awards for his Bristow series. In 1971 he made an introduction into stage work and in 1999 adapted Bristow into a six-part series for BBC Radio 4. Dickens has also published twelve children's books and two thrillers.

claudia
2.0 out of 5 stars Boring, slow paced
15 July 2017 - Published on Amazon.com
Verified Purchase
Boring, slow paced, and seeming to go nowhere. I finally gave in to the impulse to quit reading at 60%. It was putting me to sleep.
Read more

West Virginia girl
3.0 out of 5 stars Twisty plot
27 January 2017 - Published on Amazon.com
Verified Purchase
It was a hard to follow plot and not very interesting characters. I always finish a book no matter what.
Read more
One person found this helpful

Delma
3.0 out of 5 stars Three Stars
19 January 2017 - Published on Amazon.com
Verified Purchase
Good
Read more
Go to Amazon.com to see all 3 reviews 2.6 out of 5 stars
Get FREE delivery with Amazon Prime
Prime members enjoy FREE Delivery and exclusive access to movies, TV shows, music, Kindle e-books, Twitch Prime, and more.
> Get Started
Back to top
Get to Know Us
Make Money with Us
Let Us Help You
And don't forget:
© 1996-2020, Amazon.com, Inc. or its affiliates