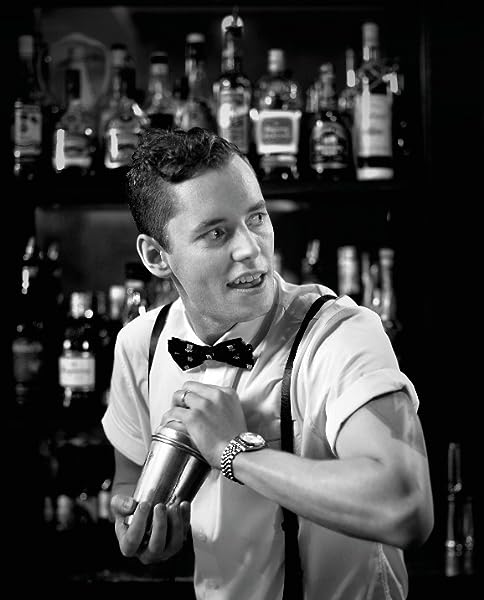 The Curious Bartender Volume 1: The Artistry and Alchemy of Creating the Perfect Cocktail Hardcover – 1 November 2013

by Tristan Stephenson (Author)
4.7 out of 5 stars 618 ratings
See all formats and editions
Sorry, there was a problem loading this page. Try again.

Tristan Stephenson is a rising star in the cocktail world. He has worked with Jamie Oliver, and was a brand ambassador, training bartenders at The Ritz, among other top hotels. In 2009 he set up a consultancy company for the drinks industry Fluid Movement. From there he went on to open critically acclaimed London bars The Worship Street Whistling Shop (decorated in steampunk Victoriana style), Purl and Dachs & Sons. This is his first book.

Start reading The Curious Bartender on your Kindle in under a minute.

Tristan Stephenson is an award-winning bar operator, bartender, barista, chef, journalist, and bestselling author of the Curious Bartender series of drinks books. In 2009 he placed 3rd in the UK Barista Championships, was awarded UK bartender of the year in 2012, and in the same year was included in London Evening Standard’s top 1000 most influential Londoners.

Having started his career in the kitchens of various Cornish restaurants, Tristan was eventually given the task of designing cocktails and running bar operations for Jamie Oliver’s Fifteen restaurant (in Cornwall) back in 2007. He opened his first London bar, Purl, in 2010, and then the Worship Street Whistling Shop in 2011. Worship Street Whistling Shop was awarded Time Out London’s best new bar in 2011 and placed in the ‘World’s Fifty Best Bars’ for three consecutive years. In 2014 Tristan opened Surfside, a seafood restaurant on Polzeath beach in North Cornwall, which was awarded the No. 1 Position in the Sunday Times ‘Best alfresco dining spots in the UK 2015’. Tristan served as head chef there for the first year and continues to manage the food and beverages menu. Tristan has gone on to open a further three venues in London, including Black Rock whisky bar which, as of 2019, has won CLASS Magazine's coveted Best Specialist Bar Award for three consecutive years.

Tristan’s first book, The Curious Bartender: The Artistry &amp; Alchemy of Creating the Perfect Cocktail was published in October 2013 and shortlisted for the prestigious Andr&eacute; Simon Award. His second book, The Curious Bartender: An Odyssey of Malt, Bourbon &amp; Rye Whiskies hit the bookshelves in October 2014. In Spring 2015 he published The Curious Barista’s Guide to Coffee (having previously successfully harvested, processed, roasted and brewed the first cup of UK grown coffee from the Eden Project in Cornwall). Subsequent books have covered topics of gin and rum. Tristan has travelled to over 300 distilleries around the world, in over 50 countries, including the Netherlands, Scotland, Mexico, Cuba, France, Lebanon, Italy, Guatemala, Japan, America and Spain.

Tristan is husband to Laura and father to Dexter and Robin. In his spare time he rides a Triumph motorcycle, takes photos, cycles and runs ultramarathons.

4.7 out of 5 stars
4.7 out of 5
618 global ratings
How are ratings calculated?
To calculate the overall star rating and percentage breakdown by star, we don’t use a simple average. Instead, our system considers things like how recent a review is and if the reviewer bought the item on Amazon. It also analyses reviews to verify trustworthiness.

B. Arrowsmith
5.0 out of 5 stars A passion project by the author
Reviewed in the United Kingdom on 28 May 2020
Verified Purchase
A great book for the cocktail enthusiast. This isn’t a standard recipe book. If that’s what you’re after just look online. This is a book written by someone that has a true passion for cocktails. It’s perfect if you already know a little bit, and have a fairly well developed liquor cabinet. The book oozes knowledge of drinks, flavours, history and science. It never strays far from my home bar, and is rarely closed. Can’t wait to read the sequel.
Read more
2 people found this helpful
Report abuse

Jakub
5.0 out of 5 stars The book for every new bartender
Reviewed in the United Kingdom on 3 August 2019
Verified Purchase
Words cannot describe how much I love this book.

B. Hull
5.0 out of 5 stars Fascinating and educational
Reviewed in the United Kingdom on 19 February 2021
Verified Purchase
I have thoroughly enjoyed learning and trying the recipes in this book. I feel like the book is worth more than its current price due to the depth and breadth of knowledge, history and experience crammed into it. Every cocktail listed has the back story of how it came about, plus the author’s opinion and experiences of each drink. There’s also lots of information on the science and techniques - it really goes deep into the details but in a way that is accessible and you find yourself learning a lot, very quickly. In addition to the simple-to-make classics there are much more complex and challenging recipes for those who want to take it further. All in all a superb book I highly recommend.
Read more
Report abuse

Julien
5.0 out of 5 stars One of the best book I bought
Reviewed in the United Kingdom on 8 September 2017
Verified Purchase
I think, this book is made for professionals, I bought it especially for the stories and techniques. A beginner who only needs recipes won't find it interesting, except if you are curious, passionate and want to start the barending. I mean it's not a simple book of recipes.
I don't regret my purchase.
Read more
5 people found this helpful
Report abuse
See all reviews
Back to top
Get to Know Us
Make Money with Us
Let Us Help You
And don't forget:
© 1996-2021, Amazon.com, Inc. or its affiliates