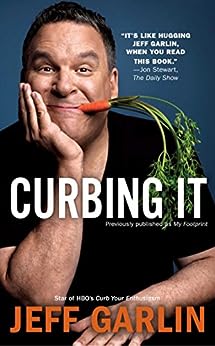 by Jeff Garlin (Author) Format: Kindle Edition
See all formats and editions
Sorry, there was a problem loading this page. Try again.
Now in paperback from comedian and actor Jeff Garlin—who plays Larry David’s cheerful manager on HBO’s Curb Your Enthusiasm—a year-long chronicle of his journey to reduce both his physical and carbon footprint in this laugh-out-loud self-experimental memoir.


Jeff Garlin has dedicated the filming of an entire season of Curb Your Enthusiasm to completely making over his lifestyle in two major ways—by losing weight and going green. Larry David’s rooting for him. Jerry Seinfeld’s plotting against him. And his wife is just plain annoyed by everything.

The hardest part of the endeavor is overcoming his food addiction—especially when craft service has a constant buffet of everything delicious you could imagine. In addition to cutting calories, Jeff accidentally falls into a love affair with pilates, sweats with Richard Simmons, and twice visits the Pritikin Longevity Center, which he says is “rehab for people who eat too much pizza.” As far as going green, Jeff has always been a big recycler, but he has a lot to learn. For example, actor Ed Begley Jr. is the guy to call if you want to reduce your environmental impact. Jeff does, and it changes everything.

Hysterical, entertaining, and eye-opening, Curbing It is a comedic memoir that’s not to be missed.

Previously published as My Footprint with bonus material added in this edition.
Read more
Previous page
Next page

Jeff Garlin is best known for his work on Curb Your Enthusiasm. He also spent three seasons on NBC’s Mad About You in the role of Marvin, and he has a variety of television and film appearances to his credit, including Dr. Katz, Arrested Development, Everybody Loves Raymond, the Late Show with David Letterman, The Daily Show, Late Night with Conan O’Brien, Daddy Day Care, and WALL-E. He has also had his own HBO half-hour comedy special. --This text refers to an alternate kindle_edition edition.

Comedian and actor Jeff Garlin is best known for his work on Curb Your Enthusiasm. Garlin also spent three seasons on NBC's Mad About You in the role of Marvin, and has a variety of television and film appearances to his credit including Dr. Katz, Arrested Development, Everybody Loves Raymond, The Late Show with David Letterman, Tom Goes to the Mayor, The Daily Show, Late Night with Conan O'Brien, Daddy Day Care, and WALL-E. He has also had his own HBO half-hour comedy special.

Ricardo Ono
1.0 out of 5 stars Just not good
Reviewed in Brazil on 30 May 2017
Verified Purchase
It is a shallow book. I thought it was more than just a diary about a kind of famous fat guy trying to get in shape, but... boy, I was wrong. The humor is silly and forced in many passages.
Read more
Report abuse

Larry Selinker
5.0 out of 5 stars Curb It
Reviewed in the United States on 1 January 2013
Verified Purchase
Garlin is a revelation on Curb, so much so that i just had to buy this part of his autobiography,  Curbing It . This is a very fun and interesting book, focussing on how hard it is to get over his obsession on food, any obsession actually. It is quite an accomplishment to write a book that is both fun, which you expect, but also poignant, the depth of which is surprising, but garlin does accomplish that. I hope he stays healthy and keeps on entertaining us in his unique way.
Read more
Report abuse

C. Kavanagh
5.0 out of 5 stars Jeff Garlin Fan
Reviewed in the United States on 26 July 2013
Verified Purchase
i love jeff garlin and I loved his book. currently listening to his podcast and rewatching curb so cant get enough.
Read more
Report abuse

Patricia H. Ramsey
5.0 out of 5 stars Curbing It
Reviewed in the United States on 18 September 2012
Verified Purchase
I thought the book was excellent. As a person who has been in a weight loss program & just reached goal, the book helped me in my endeavor.
Read more
Report abuse
See all reviews
Back to top
Get to Know Us
Make Money with Us
Let Us Help You
And don't forget:
© 1996-2022, Amazon.com, Inc. or its affiliates