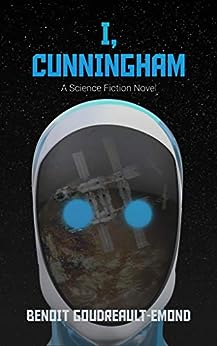 Benoit Goudreault-Emond is a man (or at least, he was, last time he checked) living in Montreal, Qu&eacute;bec, Canada. He hopes to write some decent novels eventually. Hopefully, you will be able to stand what he wrote in the meantime. Keep at it, it will build character.

When not writing, he spends his time futzing around with mechanical keyboards, annoying his ever-patient wife with various rants, and attempting to be a reasonable approximation of a good father to their lively daughter. Oh, and he’s a programmer during the day, and does most novel writing at night. In the basement. With lights on, which should surprise you if you know anything about programmers and lights.

Claude Emond
5.0 out of 5 stars I Cunningham, a great science fiction read, whether you are the author’s father or not!
Reviewed in Canada on 3 July 2020
Verified Purchase
This is the first science fiction book written by this author, our son Benoit Goudreault-Emond. Artificial intelligence, robots, modified humans, space immigrants, unwelcoming planet, questionable terraforming, everything is there for lovers of the genre.

Sure, I’m a little biased. However, as a big consumer of books (4-5 books per month, on average), including a good taste for science fiction, I loved reading this first novel, especially since we can not guess before the last pages how everything ends. And the science backing the story is solid and well annotated.

I recommend it. It’s great entertainment, whether we are in lockdown because of the current pandemic or not. 😎
Read more
One person found this helpful
Report abuse

World Roamer
5.0 out of 5 stars A very savory reading. Enjoying it!
Reviewed in the United States on 27 September 2020
Verified Purchase
Being only half way through the book, I would like to share my humble opinion. My first attempt of reading the book did not take me too far. About a month ago I strated it from scratch.
Taking my time, enjoying tremendously the dialogs, descriptions, side notes, explanations, feelings of characters.
The narrative is often outright funny. I even started taking notes by saving my favorite phrases and sentences from the book.
As I am still in the journey, there will be updates here.
Read more
Report abuse
See all reviews
Back to top
Get to Know Us
Make Money with Us
Let Us Help You
And don't forget:
© 1996-2021, Amazon.com, Inc. or its affiliates