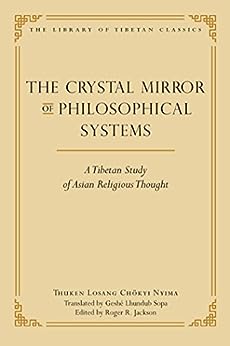 An impressive translation of a fascinating and vitally important book. This will be of great interest to students of Tibetan Buddhism. Its broad scope and keen observation makes it an invaluable resource. And for scholars interested in the history of comparative religion, it shows how sophisticated, eighteenth-century Tibetan Buddhists could come to terms with diverse world religious traditions.--Guy Newland, Central Michigan University, author of Introduction to Emptiness

This notable work, completed at the beginning of the nineteenth century, presents an in-depth treatment of the key schools of Tibetan Buddhism--Nyingma, Kadam, Sakya, Kagyu, Gelug, and Jonang, as well as Bon. The reader-friendly translations introduce the texts to the general reader, making this a valuable contribution to our understanding of the richness of Tibetan Buddhism.-- "Mandala"

Thuken's Crystal Mirror of Philosophical Systems is a unique work, seeking to document the full range of philosophical traditions known in Tibet, including Indian, Chinese and, above all, indigenous Tibetan traditions. This translation is precise and a pleasure to read.--Matthew T. Kapstein, Ecole Pratique des Hautes Etudes and the University of Chicago, editor of Buddhism Between Tibet and China --This text refers to the hardcover edition.

Thuken Losang Chokyi Nyima (1737-1802) was among the most cosmopolitan and prolific Tibetan Buddhist masters of the late eighteenth century. Hailing from the "melting pot" region of Amdo, he was Mongol by heritage, and educated in Gelukpa monasteries. Throughout his life, he traveled widely in east and inner Asia, spending significant time in Central Tibet, Amdo, inner Mongolia, and at the Qing court in Beijing. He served as abbot of several important monasteries, and wrote hundreds of texts on Buddhist thought and practice, the most enduring and influential of which is the Crystal Mirror of Philosophical Systems.

Roger R. Jackson is the John W. Nason Professor of Asian Studies and Religion at Carleton College in Minnesota, where he teaches the religions of South Asia and Tibet. He has published many articles on the philosophy, ritual, meditative practices, and poetry of Indian and Tibetan Buddhism, and has written or co-edited several books, including Is Enlightenment Possible?, Tibetan Literature, Buddhist Theology, Tantric Treasures, and Mahamudra and the Bka' brgyud Tradition. He is a past editor of the Journal of the International Association of Buddhist Studies, and is currently co-editor of the Indian International Journal of Buddhist Studies. --This text refers to the hardcover edition.

John S. Baker
5.0 out of 5 stars A Treasure
Reviewed in the United States on 16 May 2010
Verified Purchase
This is another wonderful addition to this translation project. I have two other volumes in this series: Mind Training & The Book of Kadam (see links below). None of these books is the kind I can read right through. Mind Training is a compilation of teachings on Exchanging Self and Other. This is lifetime practice, so the book is not something to read, but an anthology of practices.

The Crystal Mirror is an 18th Century encyclopedic guide to Tibetan and other Asian philosophies. It has a lot of information I'm not interested in as well as a great deal I want to know. It is well produced. It has an excellent index. I have used it to look into areas where I have questions - Mahamudra, for instance. It is clear and concise. I found out why Amulet Mahamudra has that name. Its two parts fit together like the front and back of an amulet box (gau). I have had instruction that did not include this explanation. I also found out that Mahamudra includes a range of things and is not just one teaching.

This is a book I already treasure and I am sure its value to me will grow over the years.

Mariano Ramos
5.0 out of 5 stars Excellent book
Reviewed in the United States on 17 October 2009
Verified Purchase
The library of tibetan classics has put together a commendable collection of texts. The cristal mirror of philosophical systems offers a thorough view of buddhism in Asia with particualr emphasis in the tibetans shcools of buddhism. It is a must for any serious student of buddhism in general and tibetan buddhism in particualar. I find it particularly useful for a person deciding which school of buddhism to join. It has ample notes, a rich glossary and a fair analytical index. It is most auspicious that the Hersey family foundation is supporting this effort and making the tibetan classics available to a wider audience.
Read more
7 people found this helpful
Report abuse
See all reviews
Back to top
Get to Know Us
Make Money with Us
Let Us Help You
And don't forget:
© 1996-2021, Amazon.com, Inc. or its affiliates