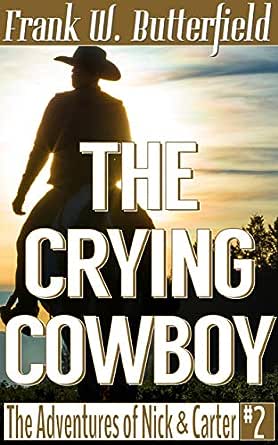 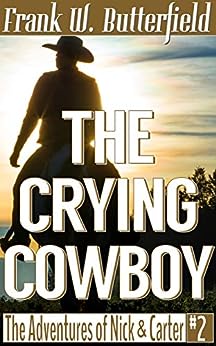 Nick and Carter are home, at last, from nearly three years of roaming the world and are glad to be back in the City by the Bay.

It just so happens that their return coincides with the filming of Monumental's newest TV show at the Folsom Street studio.

Lola Dunbar, hot off Monumental's most successful series to date, is getting her own spin-off!

Everyone is excited about the second black actress to lead a cast on network TV, following Diahann Carroll's big hit on NBC as Julia.

Well... truth be told... not everyone is excited.

Lola's leading man is turning out to be a real handful, for one thing...

Potential sponsors are concerned about how the show will be received in the South...

And the network hasn't given the show a timeslot yet...

Nick, who really hates TV, is unexpectedly thrown into the role of managing a production that is threatening to spin out of control.

And that's just where things start in Nick and Carter's next adventure: The Crying Cowboy.

Ulysses Grant Dietz
4.0 out of 5 stars In this second installment, we learn what really has value in Nick and Carter's life.
23 December 2019 - Published on Amazon.com
Verified Purchase
“I’m a fireman and I’ve got the hose to prove it.”
“Oh, brother.”

Will Nick find a new career? Will Nick and Carter get through a dinner without interruption? Will our boys ever be able to return to Los Angeles County?

This second installment in Frank Butterfield’s new Nick & Carter series (actually, the old series liberated from its “mystery” mantle) almost ends in a cliffhanger. Well, it certainly ends abruptly, and I was a bit put off. I had QUESTIONS. But the author has such an aggressive timetable for releasing new books, I’m afraid he drives himself too hard.

Let’s set the stage: the year is 1970. Nick is forty-eight and Carter is about to turn fifty. I am fifteen, and will start prep school in the fall, after I drag my poor father around England during the summer for two solid weeks looking at stately homes. Oops. Let myself slip in there, didn’t I?

Well, there you go. For me, this is not quite the same nostalgic look at the bad old days that the earlier books in this series were. This all takes place during my life, and the most shocking thing to me reading this is the fact that, as an adolescent, I was completely oblivious to the idea of closeted gay movie stars and racist television networks. I watched Diahann Carroll avidly as “Julia” on TV; I saw Rock Hudson with Doris Day in “Pillow Talk” on the Saturday afternoon movietime. I had no freaking clue, as a carefully coddled upper-middle-class white boy, that people like Nick and Carter, even as billionaires, might not be able to go to LA because of an outstanding indictment on charges of sodomy. This, mind you, a year AFTER the Stonewall rebellion, about which I knew nothing. By 1971 I acknowledged to myself that I was gay; and by 1975 I would come out at college. But in 1970, that was all an unimaginable future for me.

As Nick and Carter face serious middle age (40 is only practice), they are both yearning to stay at home, which is the Victorian mansion on Nob Hill rebuilt by the Williams family after the 1906 earthquake and fire. On the other hand, Nick is also restless, wanting to do something more than sit around counting his money while handing out hundred-dollar tips. Carter has his publishing house, but for Nick this is something of a mid-life crisis moment.

The central plot focuses on the production launch of a new television series from Monumental Studios, Nick and Carter’s Hollywood enterprise. Out of that spins a marvelous spot-on series of complications dealing with the movie industry’s hypocrisies regarding race and sexuality.

Secondarily, however, Butterfield drops in a rather heart-stopping sub-plot focused on a tragic failure of modern technology that strikes both Nick and Carter where their hearts are. Like the moral and social failure of Hollywood, this subplot reminds us that, for all their wealth and their shiny toys, society continues to fail Nick and Carter, and by extension every non-straight, non-white person.

The only thing of real value that Nick and Carter have is their love, which is as unshakeable now as it was at the beginning of their saga. That is the continuity that keeps me reading. The rest is all smoke and mirrors.

Geoff Whitwell
5.0 out of 5 stars Hard to put down
13 December 2019 - Published on Amazon.com
Verified Purchase
The boys adventures are fast paced and exciting. The writing style is incredibly easy to follow and you find yourself turning the pages at a rapid rate. I like the way this series story line develops from one book to another which only became apparent towards the end of this book. Nearly had a meltdown in this one when Carter looked like he had been killed and also when Mike gets carted off to hospital.
Read more
2 people found this helpful

Leigh
5.0 out of 5 stars Another Great Read from FB
17 December 2019 - Published on Amazon.com
Verified Purchase
I am very much enjoying Nick and Carter's new adventures. I don't know what it is, they are the same characters having wonderful and varied adventures, but somehow this new series seems -- different. Anyway, dive in, you'll love it. Lots of cool stuff going on, some scary stuff, guaranteed all the feelings.
Read more
2 people found this helpful

María Fé Chaparro
5.0 out of 5 stars Great setup for future adventures
13 December 2019 - Published on Amazon.com
The boys are back home and Nick has found a new job! As a master of reinvention, he's found a job AND a worthy cause to rally the gang for to welcome change to the new American conscience and increasingly young audience. Of course, it wouldn't be a Nick and Carter adventure without an emerging mystery and possible new foes. It is a great setup to the next big change in their lives. Mr Butterfield is a master of the craft, understanding both his characters and his audience, weaving once more a wonderful yarn with all our usual suspects and leaving us wanting more!
Read more
2 people found this helpful
Go to Amazon.com to see all 9 reviews 4.8 out of 5 stars
Get FREE delivery with Amazon Prime
Prime members enjoy FREE Delivery and exclusive access to movies, TV shows, music, Kindle e-books, Twitch Prime, and more.
> Get Started
Back to top
Get to Know Us
Make Money with Us
Let Us Help You
And don't forget:
© 1996-2020, Amazon.com, Inc. or its affiliates