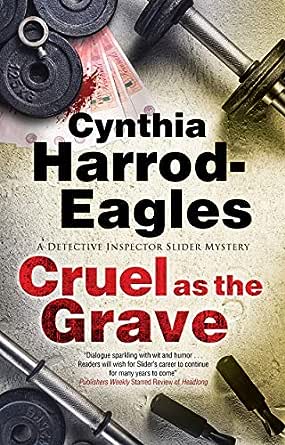 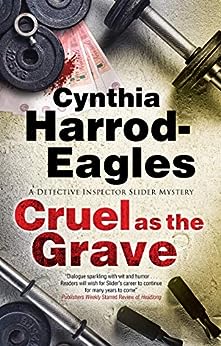 CYNTHIA HARROD-EAGLES CRUEL AS THE GRAVE Fitness trainer Erik Lingoss is found dead in his west London flat, his head smashed by one of his own dumbbells. His heartlessly-dumped girlfriend, blood on her clothes and hands, is the prime suspect. She had means, opportunity, and motive. But is the case as clear-cut as it seems? Handsome Erik Lingoss had clients in high places; and he seemed to engender powerful emotions. If it was a crime of passion, there was plenty of that to go round: love strong as death, jealousy cruel as the grave. Who did he let in to his flat that evening? Where is his missing mobile phone? Why is seven hundred pounds in cash stuffed under his pillow? The deeper Slider and his team dig, the clearer it becomes there's far more to this case than meets the eye. --This text refers to the hardcover edition.

'A cracking police procedural ... Another sterling entry in a truly outstanding series.' -- Booklist

'A witty, thoughtful mystery ... Fans of Deborah Crombie's 'Duncan Kincaid and Gemma James' series will be moved by this carefully constructed tale.' -- Library Journal --This text refers to the audioCD edition.

Cynthia Harrod-Eagles was born on 13 August 1948 in Shepherd's Bush, London, England, where was educated at Burlington School, a girls' charity school founded in 1699, and at the University of Edinburgh and University College London, where she studied English, history and philosophy. She had a variety of jobs in the commercial world, starting as a junior cashier at Woolworth's and working her way down to Pensions Officer at the BBC. She wrote her first novel while at university and in 1972 won the Young Writers' Award with The Waiting Game. The birth of the MORLAND DYNASTY series enabled Cynthia Harrod-Eagles to become a full-time writer in 1979. The series was originally intended to comprise twelve volumes, but it has proved so popular that it has now been extended to thirty-four. In 1993 she won the Romantic Novelists' Association Romantic Novel of the Year Award with Emily, the third volume of her Kirov Saga, a trilogy set in nineteenth century Russia.

Mark Meadows is a British actor with extensive theatre, film and TV credits. He is a frequent contributor to plays, musicals, narrations and readings for BBC Radio 3 and Radio 4. Mark has narrated around 80 audiobook titles and was a nominee for the 2013 Audible Narrator of the Year award. He also provided the voice of the ship’s computer in Ridley Scott’s Prometheus. --This text refers to the audioCD edition.

The murder of a personal fitness trainer draws DCI Bill Slider and his team into a baffling investigation where nothing is as it first appears. --This text refers to the audioCD edition.
Read more

4.7 out of 5 stars
4.7 out of 5
114 global ratings
How are ratings calculated?
To calculate the overall star rating and percentage breakdown by star, we don’t use a simple average. Instead, our system considers things like how recent a review is and if the reviewer bought the item on Amazon. It also analyses reviews to verify trustworthiness.

There are 0 reviews and 11 ratings from Australia

Helen19
3.0 out of 5 stars Not vintage Bill Slider...
Reviewed in the United Kingdom on 2 January 2021
Verified Purchase
but readable as always. The plot was thinner, much less complex than usual and I'd spotted the killer long before the detectives did. However, what I really missed was the wordplay and banter between Slider & Atherton; in fact, the team in general were hardly in it.
So, not vintage Slider but this is Cynthia Harrod Eagles so worth reading. Just.
Read more
One person found this helpful
Report abuse

Joan C
5.0 out of 5 stars Worth the wait
Reviewed in the United Kingdom on 20 January 2021
Verified Purchase
It has been a long time coming, but this latest Bill Slider was worth waiting for. Another cracking read, hope it's not the last!
Read more
Report abuse

Migs Jacques
5.0 out of 5 stars crime and humour
Reviewed in the United Kingdom on 27 January 2021
Verified Purchase
As always Cynthia Harrod Eagles combines a good detective plot, with a family backstory, and humour. puns galore to make you laugh out loud.
Read more
Report abuse

COH
3.0 out of 5 stars Lightweight entry
Reviewed in the United States on 18 January 2021
Verified Purchase
I have been a big fan of this series from the start, appreciating the punning and other quirks, the various characters and Slider's story, which inches along. However, in this episode from the start I was disappointed to find Slider using a malaprop - which is Porson's quirk...Then there is the plot, which is ridiculous. I am happy to read a story without searching for "who dunnit," just enjoying familiar characters. But the whole team looked like amateurs here while a voice in my head kept saying, "it's the other one." Add in the tease that Slider's daughter may come to live with him but then is dropped cold - no further discussions, planning, etc. Unsatisfactory.
Read more
Report abuse

peggyh
3.0 out of 5 stars Disappointing
Reviewed in the United States on 6 January 2021
Verified Purchase
Sadly, not one of CH-E's best, and not worth the price...i suspected "who dunnit" about 1/3 of the way through.
Did love the little details, chapter headings, et al...maybe i've been reading too many mysteries? nah...
Have pre-ordered next Donna Leon and Elly Griffiths - hope they don't disappoint (did appreciate that the new baby is a girl)
Read more
Report abuse
See all reviews
Back to top
Get to Know Us
Make Money with Us
Let Us Help You
And don't forget:
© 1996-2021, Amazon.com, Inc. or its affiliates