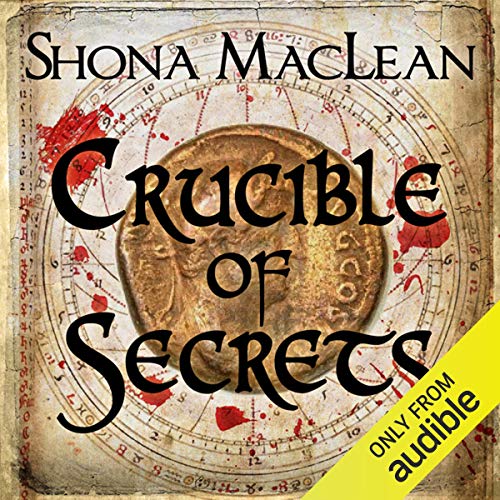 4.5 out of 5 stars
4.5 out of 5
308 global ratings
How are ratings calculated?
To calculate the overall star rating and percentage breakdown by star, we don’t use a simple average. Instead, our system considers things like how recent a review is and if the reviewer bought the item on Amazon. It also analyses reviews to verify trustworthiness.

Clemens A. Schoonderwoert
5.0 out of 5 stars A Fantastic Scottish Historical Secretive Thrller!
Reviewed in the United Kingdom on 31 January 2020
Verified Purchase
This very entertaining book is the 3rd instalment of the wonderful "Alexander Seaton" series from the Scottish author, Shona MacLean.

Storytelling is once more of a superb quality, all figures featuring in this thrilling story come splendidly to life, and not to forget the atmosphere and historical times of Aberdeen, Scotland, and the surrounding countryside are wonderfully pictured and described by the author.

The book is set in Aberdeen, in the year AD 1631, and it starts off with a very short but intriguing prologue which will form the essential basis of this tremendous tale.

Like I said earlier, this thrilling Scottish historical mystery is set in the year AD 1631, and our protagonist, Alexander Seaton, who's now a Regent at the Marischal College, which is part of Aberdeen University along with King's College, will come into action once again to solve some serious heinous murders.

The main story is fast-paced and action-packed, and it starts off straightaway with the murder of, Robert Sim, the librarian of Marischal College due to something he found out while cataloguing a benefaction of books.

What will follow is for Alexander Seaton to find out who this Nicholas Black is, while at the same time to investigate the killings of Sim and Cummins, and when he's finally able to identify the killer Alexander will come in for a nasty surprise when certain tangles of this web of deceit will unravel themselves in the end, because the murderer is someone who's quite close to him.

Very much recommended, for this episode is another excellent addition to this great series, and that's why I like to call this tale: "A Fantastic Scottish Historical Secretive Thriller"!
Read more
2 people found this helpful
Report abuse

C J R
2.0 out of 5 stars Cumbersome
Reviewed in the United Kingdom on 19 February 2020
Verified Purchase
I quite like the author but found this disappointing. As a device , even though not central to the plot, the secret society / masonic cabal theme has long past it's sell by date . The other device, of having anonymous confessions from the perpetrator cut across the story simply detracts and suggests that the story itself may be insufficiently interesting to leave the reader to follow the investigation. The greatest problem is the prolix introversion of Seaton who spends so much time navel-gazing you are astonished that he can focus otherwise. The books about one third too long, speed read or don't bother.
Read more
2 people found this helpful
Report abuse

Steve
4.0 out of 5 stars Well written and researched. Enjoyable.
Reviewed in the United Kingdom on 18 September 2019
Verified Purchase
Well written, obviously well researched for the period. Relieved not to find a plethora of Scottish speak. Ended the only way it could. Enjoyable. Did not enjoy the way the main character seemed to ignore his family and create conflict with his wife but that was all part of the plot. My personal irritation with the character was why I downgraded it one. Also there were a few sections where I got bored and skipped several paragraphs without missing out. So they could be shortened. There weren't many though.
Read more
One person found this helpful
Report abuse

Vicuña
5.0 out of 5 stars Excellent 17th century murder mystery set in Aberdeen
Reviewed in the United Kingdom on 28 August 2013
Verified Purchase
For the third book in the series following the life and times of Alexander Seaton, we return to Aberdeen. A colleague is murdered and Seaton becomes embroiled in the search for the killer. There's some backfill to the first two books and this works very well as a standalone.

I find Alexander totally engaging as a character. He is growing with each book and is now a married family man, with anxieties and conflicts based on human frailty. As in the first book, the introspective nature of University life and the confines of a largely academic circle in Aberdeen are prescriptive and almost tangible. The cloistered world of study could be cloying and dull, but Ms Maclean weaves a spellbinding tale around the search for the killer. Once again, there's a significant historical background based on alchemy and a 17th century search for a universal truth. It's great stuff; a book which I was reluctant to put it down and was wondering what would happen next.

All in all, a great well rounded and likeable central character who develops as an individual, plausible locations and a plot which is well paced throughout and cleverly woven around fact. Loved it.
Read more
8 people found this helpful
Report abuse

Big Bando
5.0 out of 5 stars A great read
Reviewed in the United Kingdom on 9 January 2021
Verified Purchase
Great read, again. Love the unfolding of the characters, and the context, which for me is well researched & well written and so feels realistic. It's a slow paced novel with moments of pace, light and shade. I love historical fiction. Loved it.
Read more
Report abuse
See all reviews
Back to top
Get to Know Us
Make Money with Us
Let Us Help You
And don't forget:
© 1996-2021, Amazon.com, Inc. or its affiliates