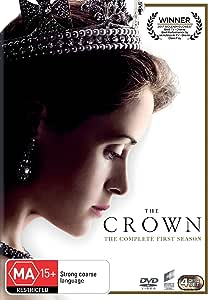 The Crown: Season One (DVD)

View our Christmas Gifting Deals for selected Movies and TV series.
Click to find out more.

All ten episodes from the first season of the biographical drama based on the life of Queen Elizabeth II. The story begins in 1947 as Elizabeth (Claire Foy) marries Prince Philip of Greece and Denmark (Matt Smith). As the couple settle in to married life, performing royal duties in the place of her father King George (Jared Harris) due to his ill health, Elizabeth's life takes a dramatic turn when she receives the news that her father has passed away. As she tries to grieve for her father, Elizabeth returns home to take her place on the throne as the new Queen of England. The episodes are: 'Wolferton Splash', 'Hyde Park Corner', 'Windsor', 'Act of God', 'Smoke and Mirrors', 'Gelignite', 'Scientia Potentia Est', 'Pride & Joy', 'Assassins' and 'Gloriana'.

4.7 out of 5 stars
4.7 out of 5
1,973 global ratings
How are ratings calculated?
To calculate the overall star rating and percentage breakdown by star, we don’t use a simple average. Instead, our system considers things like how recent a review is and if the reviewer bought the item on Amazon. It also analyses reviews to verify trustworthiness.

CEN- NSW
5.0 out of 5 stars Excellent movie but...
Reviewed in Australia on 14 February 2018
Verified Purchase
Enjoyed this enormously as did my husband, who hadn't expected to! Only disappointment was the quality of the dvd- very 'fuzzy' images in some scenes - looked like it was not from the 'original' format. We never have this problem with other dvd's. Hope that season 2 doesn't have the same technical problem.
Read more
Helpful
Comment Report abuse

JTW
4.0 out of 5 stars The Crown - Season One
Reviewed in Australia on 17 August 2018
Verified Purchase
Lonely is the head that wears a crown. An entertaining presentation of what is conjectured to go on behind the scene of Monarchy. It should provide an admiration for the role and the function of the Queen.
Read more
Helpful
Comment Report abuse

J.R.P
5.0 out of 5 stars Inside story of Royal life!
Reviewed in Australia on 13 February 2018
Verified Purchase
Interesting inside story of royal life. Give really good picture What was going one and the conflict between personal live and duty as a Queen. Interesting story, really worth to watch Even if you’re not royalist.
Read more
Helpful
Comment Report abuse

Kate Tulloch
5.0 out of 5 stars Must-own, award-winning TV
Reviewed in Australia on 8 December 2017
One of my favourite TV series and worth getting in HD / Blu-ray as well. It's just stunning! And so well acted. Can't wait for Season 2!
Read more
Helpful
Comment Report abuse

MysteronMan
5.0 out of 5 stars Stunning
Reviewed in the United Kingdom on 6 January 2018
Verified Purchase
Utterly captivating, moving, mesmerising, beautiful. The episode with Churchill as the focus had me in tears at the end. Claire Foy is astoundingly good, a masterpiece of dignity. Possibly one of the finest dramas of its era. And I might add series 2 is just as good but very different. You will never think the same way about the Queen, or the Duke. In fact any respect you may have will be magnified and enhanced. Even an anti-monarchist such as I will never loose the respect for the Queen this reinforces, it makes you realise that nobody can or ever will fill her shoes when the time comes.
Read more
28 people found this helpful
Report abuse

Dani
5.0 out of 5 stars I'm not a monarchist but....
Reviewed in the United Kingdom on 20 January 2018
Verified Purchase
I bought this for a friend and fellow English teacher and she kindly let me watch it first. I was only planning on watching one or two episodes just to see what the fuss was about, but I watched them all and will be looking out for series 2 on DVD as well. I found it fascinating, and it sent me looking up all sorts of aspects of fairly recent British history which I wouldn't have done otherwise.
Read more
15 people found this helpful
Report abuse

CathyC
2.0 out of 5 stars Beautifully made but sacrifices truth for drama
Reviewed in the United Kingdom on 2 June 2019
Verified Purchase
This is certainly a beautifully made series and I'd been thoroughly enjoying it until I reached the final episode. In it, The Queen breaks her promise to Princess Margaret that if she waits two years she may marry Group Captain Peter Townsend, who is divorced.
When the time is up the Queen refuses to give her permission once again and adds, chillingly, that if Margaret does wed Townsend she will be cast out of the Royal family.
I found this rather hard to believe and Googled it.
It didn't take much research to ascertain that this never happened. The Queen did indeed maintain her refusal on advice from senior clerics, but she worked out a compromise with Prime Minister Anthony Eden, who is shown, inaccurately, as being opposed to the match. Margaret was told she could marry Townsend on the condition that she give up her right to the accession and that of any descendants.
A letter from Princess Margaret to Eden also emerged in 2009 showing that she was actually undecided after the two years about whether or not she still wanted to marry Townsend.
When the offer was made to her she decided not to.
Instead of telling the truth, the programme makers decided to reinforce the popular perception at the time that the authorities had forced Margaret apart from her ideal match, thereby ruining her life. It's quite clear they did this to give the episode and the first series a nice, dramatic end.
I find now that I can't watch the second series. I don't mind them messing around with details as long as the fundamentals are right, but this is not a trivial thing. I wouldn't want to follow the fortunes of a family that behaved like this towards their members and, in that spirit, I don't want to follow a series, however good, that sacrifices such major facts for the sake of drama.

Essex Musician
5.0 out of 5 stars Compelling series.
Reviewed in the United Kingdom on 4 February 2018
Verified Purchase
Brilliant series. It covers the childhood of the then Princess Elizabeth, the Abdication of her uncle and the sudden huge change of circumstances as her father becomes King.
Then her marriage to Prince Philip, the sad early death of King George and her becoming Queen Elizabeth the second when still a very young woman.
The casting and acting of every member of the cast is marvellous.
Read more
5 people found this helpful
Report abuse

Mike
5.0 out of 5 stars Excellent series, quality acting.
Reviewed in the United Kingdom on 24 October 2018
Verified Purchase
If proof was needed that if you spend enough money it will all work out fine, then "the Crown" is proof. Great acting & production values are evident. I wouldnt say it's ALL gospel as certainly a lot of dramatic license is on display. If watched by a "can't do any wrong" royal supporter then it might be a bit harsh to watch. I'd say it's like ignoring the best review & worst review and arriving at truth, so it's great to watch, informative but not gospel, I think our queen is a bit more jollier than is protrayed and I'm sure Prince Philip is.
Read more
Report abuse
See all reviews
Get FREE delivery with Amazon Prime
Prime members enjoy FREE Delivery and exclusive access to movies, TV shows, music, Kindle e-books, Twitch Prime, and more.
> Get Started
Back to top
Get to Know Us
Make Money with Us
Let Us Help You
And don't forget:
© 1996-2020, Amazon.com, Inc. or its affiliates