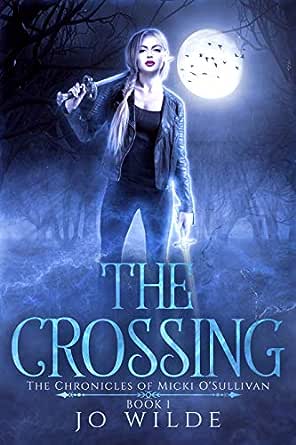 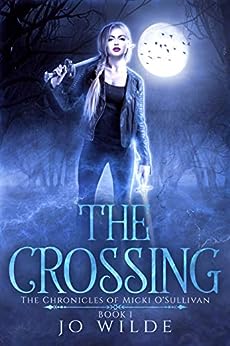 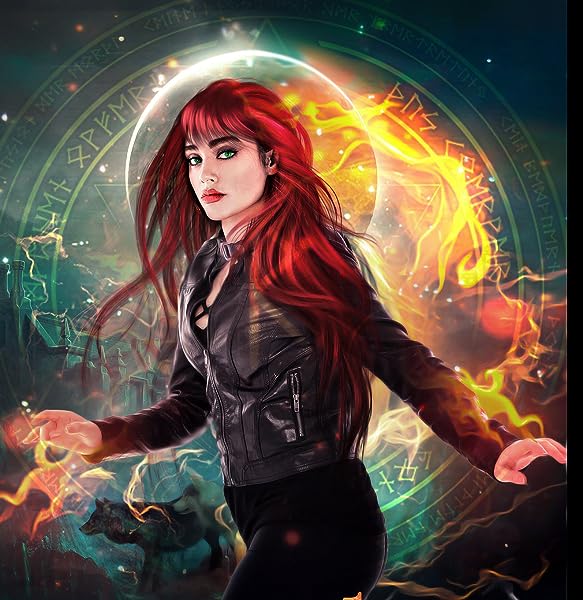 The Crossing (The Chronicles Of Micki O'Sullivan Book 1) Kindle Edition

Miss L 🥀
5.0 out of 5 stars Great YA for teen readers
Reviewed in Australia on 24 June 2020
Verified Purchase
Another great read from Jo Wilde!

This one is targeted for YA and I think it will be very popular with teens.

Micki is a troubled teen after her parents divorce.
She gets into a little trouble and is sent to live with her Dad in Louisiana.
That’s where more trouble seems to finds Mick and her new bestie, Candy, while she tries to keep herself and her loved ones safe from forces she believed were a myth!

Payne’s Bookworm Reviews
TOP 500 REVIEWER
4.0 out of 5 stars Intriguing and interesting read
Reviewed in Australia on 27 June 2020
3.5⭐️
“The Crossing” is book one in Jo Wilde’s The Chronicles of Micki O'Sullivan series.

This series follows 17 year old Micki. Being sent to live with her father Henry in Louisiana, after having some trouble with the law. Micki finds herself in the middle of something that can only be dreamed up, a myth. Wanting to make friends Micki agrees to go to a party with some girls from School. Things go wrong and being attacked has Micki’s life changing. Needing to stay out of trouble, Micki meets Candy, her new BFF, but trouble seems to be lurking around each corner. Trying to keep her family and BFF safe has Micki finding herself in more danger and trouble than before.

This is the second book I have read by this author. I did enjoy this story, it was unique, intriguing, new, interesting and engaging. But I did find somethings to be frustrating and confusing, there were a few small things that messed with the timeline, characters traits and events being off. But if you are able to overlook these small things I do believe you will be able to enjoy this story. I look forward to reading The Haunting.
Read more
Helpful
Report abuse

kokom1
4.0 out of 5 stars A vampire romance mystery
Reviewed in Australia on 4 April 2020
A stand alone book about Mick, a girl new to a small town due to family drama, finding herself in a bad way when she is forced to drink vampire blood. As a result she’s fighting the urge to take blood and “cross” the stretch between being a human and vampire. Throw in the brooding gorgeous Valentine who quickly falls in love with Mick and helps her to try and bring down their mysterious sire before it’s too late. I did expect some extra fight in Mick, especially as the cover shows her holding a sword and some other glowing artifact? You also never find out specifically why the vampires consider her special other than that she can see aura’s. it would have been great to see Candy’s mum join forces in the battle, perhaps with Grandpa? It also ties up a bit quickly but is an enjoyable ride. It does leaves some unanswered questions with Valentine, so not quite a happily ever after ending.
Read more
Helpful
Report abuse

Gen’s bookreviews
5.0 out of 5 stars Vampires, witches and PNR ❤️
Reviewed in Australia on 7 June 2020
I found Jo Wilde through an authors group on recommendation of a friend. Wow am I pleased that I did.

This is a well written YA PNR. The characters are believable, with both romance and friendships developing throughout the book.

This is both sweet and easy to read. It’s a pleasant change.

I’m off to read Jo’s next book and will enjoy discovering more as she adds to her craft.
Read more
Helpful
Report abuse

Alicia Spalding
5.0 out of 5 stars Vampires, witches, first love and Sass in spades
Reviewed in Australia on 22 June 2020
Absolutely perfect. Can't wait for book two. Micki is a fantastic character and I just loved Candy!!! I wish I had a dad as cool as Henry. So much happens in this book and I could not put it down. Better than Twilight. Jo Wilde is awesome. Can't wait to see what she does next!!!!
Read more
Helpful
Report abuse
See all reviews

Customer
4.0 out of 5 stars An Interesting YA Story
Reviewed in the United Kingdom on 20 April 2020
Verified Purchase
A thrilling story of a teenage girl called Micki who moves to a town called Eastwick to live with her father and grandfather where she is quickly pulled into a devastating problem with some girls at her new school and then meets a new best friend called Candy. Together, Micki and Candy find out about vampires and other odd things about the town they live in along with Micki falling for a boy called Valentine.

This book was a pageturner for me. I enjoyed it immensely.
Read more
Report abuse

Joi Cox
5.0 out of 5 stars Brilliant read
Reviewed in the United Kingdom on 13 June 2020
Verified Purchase
This is the first book I’ve read from Jo Wilde and I enjoyed it very much, the story line was great and the characters come to live, will be reading more from her in the future, a must read for everyone who likes witches and vampires,
Read more
One person found this helpful
Report abuse

veriito bm
5.0 out of 5 stars I like it!
Reviewed in Mexico on 22 November 2019
Verified Purchase
I really liked the book and recommend 100% it's not romance (my fav) but it's a really good story to read. I want read more Jo Wilde's stories!
Read more
Report abuse

C.belle
5.0 out of 5 stars Great story!
Reviewed in the United States on 15 November 2019
Verified Purchase
Great book! Read the sample and had to get the full book. Any age could read this. Teen and adults, both. I love the chapter that got the story fired up when Diablo, a vampire, tried to force Micki to drink blood. Valentine, a half-vampire, saved her but not before she had ingested some of the blood.

From that point, Micki was struggling with sickness. Valentine tried to help her and warn her about her changing but at first Micki didn’t want to accept it. When she finally believed Valentine, she, her best friend and Valentine set out to reverse curse, hoping to destroy the sire responsible. But no one knew who the sire is. The story gets really twisted and the romance between Valentine and Micki grows. Candy, Micki’s sidekick is cute and comical. I like his southern accent and funny slang. The ending doesn’t disappoint.

Galaxy's Bookshelf
5.0 out of 5 stars A Book to Sink Your Teeth Into...
Reviewed in the United States on 16 November 2019
Verified Purchase
Mixing teen angst with paranormal romance in Lousianna, Jo Wilde creates a heightened world of vampires, witches and hilarious next-door neighbor, Candy, whose flair and humor save new girl Micki Lea Brown from boredom and a cursed clique at school.
But he may be a tad late to the party because Micki's already met beautiful, brooding vamp Valentine who is hellbent on watching over her, even during inappropriate times. This brings out the green gills in Wendy-- who may or may not be his witchy girlfriend-- and thus begins the plotting with her sidekick sycophants.
Throw in a blood guzzling bonfire, cruel cajun bikers, Micki's mysterious symptoms, a Sanhaim harvest hoedown, and poor Candy has his hands full when they're not already on his sassy hips.
Wilde is crafty with quirky character development and gives a peek of just enough picturesque description to plunk us in the midst of Eastwick's best-kept secret. Feeling for Micki Lea having to be the new girl in school, we yearn for Valentine's lush lips (which just might rival Edward's), watch our back around Wendy, and want to emit bile chunks at the vile vampire gang. But most of all we wish Candy was our tell-it-like-it-is BFF. With him at her side, Micki doesn't need garlic, but he brings it anyway.
I highly recommend this YA paranormal romance thriller for teens and adults who love YA.
Read more
3 people found this helpful
Report abuse
See all reviews
Get FREE delivery with Amazon Prime
Prime members enjoy FREE Delivery and exclusive access to movies, TV shows, music, Kindle e-books, Twitch Prime, and more.
> Get Started
Back to top
Get to Know Us
Make Money with Us
Let Us Help You
And don't forget:
© 1996-2020, Amazon.com, Inc. or its affiliates