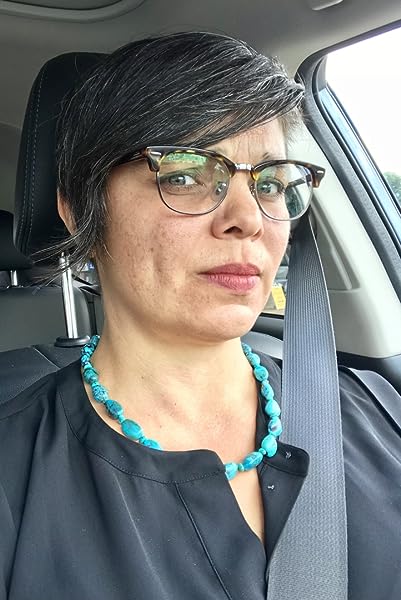 by Kelli Jo Ford (Author)
4.3 out of 5 stars 282 ratings
See all formats and editions
Sorry, there was a problem loading this page. Try again.

A book that you want to share with everyone you know and one that you are desperate to keep in your own possession. A masterful debut and a new and thrilling voice for readers across the globe. --Sarah Jessica Parker, on Instagram

It's 1974 in the Cherokee Nation of Oklahoma and fifteen-year-old Justine grows up in a family of tough, complicated, and loyal women presided over by her mother, Lula, and Granny. After Justine's father abandoned the family, Lula became a devout member of the Holiness Church - a community that Justine at times finds stifling and terrifying. But Justine does her best as a devoted daughter until an act of violence sends her on a different path forever.

Crooked Hallelujah tells the stories of Justine--a mixed-blood Cherokee woman-- and her daughter, Reney, as they move from Eastern Oklahoma's Indian Country in the hopes of starting a new, more stable life in Texas amid the oil bust of the 1980s. However, life in Texas isn't easy, and Reney feels unmoored from her family in Indian Country. Against the vivid backdrop of the Red River, we see their struggle to survive in a world--of unreliable men and near-Biblical natural forces, like wildfires and tornados--intent on stripping away their connections to one another and their very ideas of home.

In lush and empathic prose, Kelli Jo Ford depicts what this family of proud, stubborn, Cherokee women sacrifices for those they love, amid larger forces of history, religion, class, and culture. This is a big-hearted and ambitious novel of the powerful bonds between mothers and daughters by an exquisite and rare new talent.

An Indie Next Pick & A Library Reads Pick

"In her more than promising first novel, Crooked Hallelujah, Kelli Jo Ford summons the details of minimum-wage life in the last quarter of the 20th century....This is a novel in stories, a dread form in the wrong hands...But Crooked Hallelujah has a supple cohesiveness....[Ford's] book reads like a series of acoustic songs recorded on a single microphone in a bare room with a carpet. There are times when you might wish for more boldness, but she never puts a wrong foot. This is a writer who carefully husbands her resources. Small scenes begin to glitter." --Dwight Garner, New York Times

"Kelli Jo Ford takes her readers on a compelling journey through the evolving terrain of multiple generations of women... This language is rich but never dense. There's a lightness to the perspective which shifts and bends, prismed by a matrilineal succession of Cherokee and mixed-race women... Ford's connection to her characters shines through the writing, infusing these voices with a sweet, sidelong zing. --Washington Post

"[S]tunning and lovable... Ford has drawn characters who are earthy, honest and believable in how they resolve or reconcile to difficulties -- money, jobs, relationships with men. There are so many passages in this book that are moving..." --Minneapolis Star Tribune

"[F]ull of poetry... Ford's prose is so absorbing that you're right there... [Her] pages ache with tenderness and love and no small amount of frustration... These stories stand up beautifully to rereading; they made me excited for what the writer will do next." --San Francisco Chronicle

Ford, a citizen of the Cherokee Nation of Oklahoma, offers a novel in short stories, allowing her to move with ease through perspectives, history and time. Each heartbreaking chapter slowly adds to the reader's understanding of these women and their increasingly difficult lives. --TIME

Kelli Jo Ford has penned an extraordinary debut set in 1974 in the Cherokee Nation of Oklahoma that is focused on mothers and daughters, the strength and sacrifices of women and the journey that growth requires. --Ms. Magazine

Ford's storytelling is urgent, her characters achingly human and complex, and her language glittering and rugged. This is a stunner. --Publishers Weekly (starred review)

A book that you want to share with everyone you know and one that you are desperate to keep in your own possession. A masterful debut and a new and thrilling voice for readers across the globe. --Sarah Jessica Parker, on Instagram

"Strife between saints and sinners simmers in this richly drawn, atmospheric debut by a citizen of the Cherokee Nation of Oklahoma. Justine, a mixed-blood teenager, rejects her evangelical upbringing for more earthly pleasures, risking biblical plagues to embark on a decades-long odyssey that will carry her and her daughter to the Texas oil fields. Ford unravels the stirring ties that bind Native American women across cultural and generational chasms."--O, Oprah Magazine

"Engrossing and well-paced, this is a compelling story about women, mothers and daughters, the land, and family." --13 of the Most Anticipated Books by Indigenous Authors For the Second Half of 2020, Lit Hub

Ford's Crooked Hallelujah is more than just a really great title; it's the book that's going to be taught in creative writing programs for decades to come... What else can you say about a writer who won the prestigious Plimpton Prize and was published in the Paris Review right out of the gate? Nothing beyond Take my money.--Buzzfeed

Crooked Hallelujah is an intricate, soulful look at three generations of Cherokee women pushed (in Philip Larkin's phrase) to the side of their own lives. At turns gripping and moving, Kelli Jo Ford's characters and the Oklahoma and Texas landscape take center stage in a truly modern drama. Ford sidesteps the easy tropes of spirituality and connection to nature and has created a modern masterpiece peopled with complex, fully-realized characters. A huge achievement. --David Treuer

"Startling close-ups of the sticky relationship between mothers and daughters, between body and nature, between childhood certainties and adult skepticism. Kelli Jo Ford's writing is heartfelt and brimming with talent. This is a stunning, awe-inspiring debut."--Leila Aboulela

"Kelli Jo Ford's writing is a high priority and will only gain in the world's esteem...[her work] contains beauty and expected new intelligence."--Richard Ford on Kelli Jo Ford's "Hybrid Vigor," winner of the 2019 Plimpton Prize

Kelli Jo Ford is a citizen of the Cherokee Nation of Oklahoma. She is the recipient of numerous awards and fellowships, including the Paris Review's Plimpton Prize, the Everett Southwest Literary Award, the Katherine Bakeless Nason Award at Bread Loaf, a National Artist Fellowship by the Native Arts & Cultures Foundation, and a Dobie Paisano Fellowship. Her fiction has appeared in The Paris Review, Virginia Quarterly Review, The Missouri Review, and the anthology Forty Stories: New Writing from Harper Perennial, among other places.
Tell the Publisher!
I’d like to read this book on Kindle

Kelli Jo Ford's debut, Crooked Hallelujah, will be published by Grove Press in July. She is the recipient of numerous awards and fellowships, including The Paris Review’s Plimpton Prize, a Katherine Bakeless Nason Award at Bread Loaf, a National Artist Fellowship by the Native Arts &amp; Cultures Foundation, and a Dobie Paisano Fellowship. Her fiction has appeared in The Paris Review, Virginia Quarterly Review, and The Missouri Review, among other places. She lives in Virginia with her husband and daughter. She is a citizen of the Cherokee Nation of Oklahoma.

4.3 out of 5 stars
4.3 out of 5
282 global ratings
How are ratings calculated?
To calculate the overall star rating and percentage breakdown by star, we don’t use a simple average. Instead, our system considers things like how recent a review is and if the reviewer bought the item on Amazon. It also analyses reviews to verify trustworthiness.

Mrs. M.
2.0 out of 5 stars Disappointed.
Reviewed in the United States on 14 August 2020
Verified Purchase
This book got rave reviews from NY Times and others, but like other readers, I found it confusing and disjointed. I was bored with the plot until the chapter on Mose Lee and the two women. They were more interesting than the main characters, but their stories were incomplete - how did what happened to them get resolved that night?! I hated the way the main character changed so radically with little to no explanation, since a novel is the perfect place to explore these internal conflicts. The prose was nice, but the plot and ending killed it for me. I am a woman of color, and I want to hear stories from others like me, but I feel that this book was published out of tokenism. We can do better.
Read more
12 people found this helpful
Report abuse

Kindle Customer
3.0 out of 5 stars Disjointed
Reviewed in the United States on 18 July 2020
Verified Purchase
Love the main characters and the underlying theme but find myself left wanting at the end. Just as you are falling in love with Justine, she is suddenly grown with her own child Reney. Then you love her and she's suddenly grown and gone. Hard to follow at times and interesting characters pop up then are not spoken of again. The whole last chapter had me lost.
Read more
11 people found this helpful
Report abuse

Leslie Kelsay
3.0 out of 5 stars The epilogue as a free-standing short story is better than the book
Reviewed in the United States on 22 August 2020
Verified Purchase
Life is hard, and it's easier to make it harder than it is to make it easier. If you start with nothing, it's hard to get something. Count only on yourself. That's kind of it for 95% of "Crooked Hallelujah" and then BAM here comes a magical, lifting epilogue.

Three generations of Cherokee women in near-contemporary Oklahoma and Texas have the lives of hard-working, rent-scrabbling women everywhere who link up with listless or ruthless men. Untethered from their spiritual heritage and wound up in an ultra-fundamentalist church, these women don't give the reader a lot to root for. There's truth here, but the overwhelming theme is futility. Until that epilogue.

If you're weighing reading "Crooked Hallelujah" or another book, you might want to go with the other book.
Read more
2 people found this helpful
Report abuse

Katie Hart
5.0 out of 5 stars Beautifully honest and relatable
Reviewed in the United States on 7 August 2020
Verified Purchase
Beautifully written! I love each character for all of their complexities. Yet they are also relatable. The author creates such a nice imagery that she almost paints a picture for the reader. Just a lovely and honest story about the deep and complex relationships within a family of strong women. I loved it.
Read more
5 people found this helpful
Report abuse

JoBeth Shaffer
5.0 out of 5 stars Good read!
Reviewed in the United States on 6 August 2020
Verified Purchase
I loved this book. It follows the lives of Justine and Reney through all the challenges they face and overcome in life. Justine is a child raising a child, they grow up together. Life was not easy for them. I found myself laughing through parts, then having to grab tissues and wait until the tears dried to continue reading in other parts. Can’t wait for Kelli Jo’s next book.
Read more
6 people found this helpful
Report abuse
See all reviews