Skip to main content
Crone and over 1.5 million other books are available for Amazon Kindle . Learn more 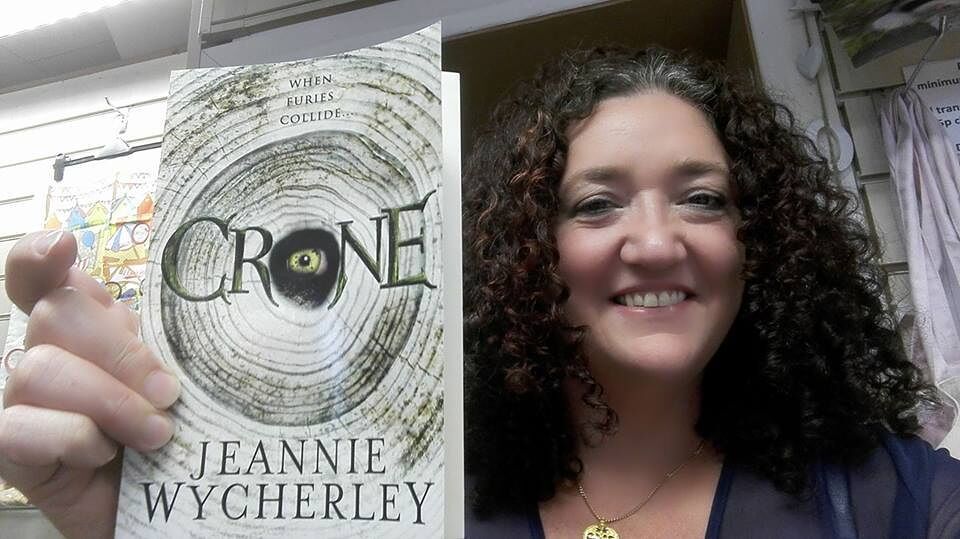 Start reading Crone on your Kindle in under a minute.

Jeannie Wycherley is a writer, copywriter and gift shop proprietor residing somewhere between the forest and the coast in East Devon, UK. Her work is inspired by the landscape, not least because her desk affords her sweeping views over Sid Valley and the glorious hills beyond. She favours the weird, firmly believes in witchcraft, makes soup in a cauldron, and hugs trees. She is the author of numerous short stories using her married name, Jeannie Wycherley, and her pseudonym, Betty Gabriel. Crone is her debut novel. Follow Jeannie on Twitter @thecushionlady

4.4 out of 5 stars
4.4 out of 5
73 global ratings
How are ratings calculated?
To calculate the overall star rating and percentage breakdown by star, we don’t use a simple average. Instead, our system considers things like how recent a review is and if the reviewer bought the item on Amazon. It also analyses reviews to verify trustworthiness.

Jeannie Wycherley’s debut novel is one packed full of creepy, witchy goodness. A great oak tree houses an even greater darkness and it is up to Heather Keynes to put an end to the evil Aefre!

Tormented soul, Heather Keynes, befriends a small group of “guardians”. The guardians are watchers and protectors against evil and have lived for many a year. Aefre is the crone, a dark witch growing ever stronger in power. She seeks to free herself and her sisters so that they can wreak havoc on the residents of Abbot’s Cromleigh. And so begins a battle of good vs evil!

Crone is a strong debut novel from Jeannie Wycherley. The writing is good, it has a nice flow to it and the pacing is solid. The atmosphere is suitably creepy and dark. It features some vivid dreamlike imagery and some great moments of horror, particularly in the latter parts of the book. The characters are well-drawn and strong enough for you to invest your time in. The main character is Heather Keynes. Heather is still reeling after losing her son in a car accident, but not to the point of which she becomes annoying in her grief. She is fragile when talking about her son, Max, but strong when facing down the evil crone, Aefre. The crone, Aefre, ticks all of the boxes for this reader as a great villain: evil beyond compare and able to shape-shift into a stunning seductress, bringing men under her sexual spell with ease. She is a driven, vile character and a real scene stealer! The guardians are also kind of cool, and have a real magical, wise old essence about them. I also loved the idea of the small white cottage which brings about Heather’s first contact with the guardians. The cottage is a sort of safe place and it’s use in the story goes against the old Hansel & Gretel fairy tale in which it was the evil crone that inhabited the cottage. I don’t know if this was intentional, but either way I dug it.

The Devonshire countryside provides a suitable backdrop for a story of this type with its winding country roads and quaint villages. There is something about folk horror tales set in the English countryside that I really dig, and Crone is no exception. I really enjoyed this book. Witchcraft and witches have always held a fascination for me and Crone is a really good horror read. For a debut novel, it is impressive, and I will be looking out for more from Jeannie Wycherley in the future. Splendid cover art, too!

4/5 broomsticks from the Grim Reader.

Nicholas Rippington
5.0 out of 5 stars Spine-tingling horror
Reviewed in the United Kingdom on 29 January 2019
Verified Purchase
Jeannie Wycherley draws on all her experiences of living in the beautiful Devon countryside to conjure up a horror tour de force. Her dark tale of Aefre, an ancient evil spirit that exists by feeding off the souls of the living, is the product of a vivid and slightly macabre imagination. This book is certainly not for those who fear the monster under the bed or suspects a bogeyman lurks in the dark corners of their bedroom. It is a tale that zips along at pace as Heather Keynes, a mother grieving the loss of her son in a traffic accident on a winding country road, begins to suspect there is more to his death than exists in the police reports. Encountering a strange group of elderly people known as the guardians, she begins to learn more as she delves deeper, until she eventually finds herself in a life-or-death battle with the old crone herself. As the story weaves to its inevitable final confrontation you learn the circumstances behind Aefre's hatred of the living and how she has developed the resilience to fight for survival by every means possible. The question is: However powerful she has become, is she strong enough to overcome the irresistible force of a mother's love? Thoroughly recommended.
Read more
7 people found this helpful
Report abuse

The characterisation of Heather was brilliant,she was so relatable and I could really see her as a real person. You can really feel her grief for her son, Max, and take pride in her desire to keep on fighting, in the hope she will learn to live again.

In contrast, Aefre is an example of that woman who cannot forgive and move on with their life. People say that hate is an acid which rots us from within and this saying really applies to her. But having said that she's a great character!

One thing I hate about stories with witches in them is that they are always portrayed as evil.I find this irksome as the reason so many women were persecuted in during the witch hunts was because men feared powerful women and their intelligence and sought to destroy them by either burning them or discrediting women. But in this book evil witches are nicely balanced with good witches who care.

I really enjoyed this book and read it in a matter of days. I just couldn't put it down particularly at the end. I kept thinking how the hell is Heather going to get out of this crazy situation. The plot was really clever, fantastical but really believable too. The ending was so great, all the little loose ends were tied up particularly with the White Cottage. I thought that was a really nice touch.

It was a book that is really easy to get into, it starts off fairly gently but really begins to pick up the pace particularly with the ending. I was torn between desperately trying to skim read so I could find out what happened but also wanting to enjoy it at the same time.

This is the first book written by Jeannie Wycherley I will definitely be keeping an eye out to see what she writes next. This is a one off book but the world that she has created is so cool she could easily write another one in that setting.

P.S. Does anyone know how to pronounce Aefre?

twinkletoes
5.0 out of 5 stars Unputdownable
Reviewed in the United Kingdom on 19 April 2019
Verified Purchase
Really enjoyed this book. Even though it's fantasy the characters are believable and you find yourself completely drawn in to the story. I couldn't leave it alone and read it in a very short time as the story had me hooked right from the first page. A monstrous baddy and a heroine who grows into her courage through the course of the tale. Highly recommended
Read more
2 people found this helpful
Report abuse

Kindle Customer
5.0 out of 5 stars Crone. Read it soon.
Reviewed in the United Kingdom on 25 February 2019
Verified Purchase
This book was amazing. I read it in two sittings. I can't wait to read more from Jeannie Wycherley. What a great author.
Read more
3 people found this helpful
Report abuse