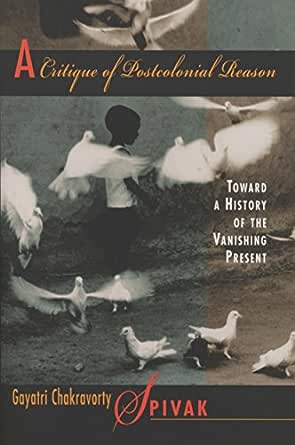 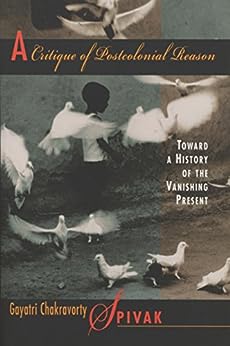 A Critique of Postcolonial Reason: Toward a History of the Vanishing Present 1st Edition, Kindle Edition

In her first full treatment of postcolonial studies, a field that the helped define, Gayatri Chakravorty Spivak, one of the world's foremost literary theorists, attempts to describe a responsible role for the postcolonial critic within the postcolonial enclave. A Critique of Postcolonial Reason tracks the figure of the "native informant" through various cultural practices -- philosophy, history, literature -- to suggest that it emerges as the metropolitan hybrid. The book addresses feminists, philosophers, critics, and interventionist intellectuals as they unite and divide. It ranges from Kant's analytic of the sublime to child labor in Bangladesh. --This text refers to the paperback edition.

Gayatri Chakravorty Spivak is University Professor at Columbia University and a trainer of elementary school teachers in West Bengal. --This text refers to the paperback edition.

Maria
5.0 out of 5 stars Five Stars
Reviewed in the United States on 13 June 2016
Verified Purchase
I love the book
Read more
One person found this helpful
Report abuse

Danny
5.0 out of 5 stars A landmark...
Reviewed in the United States on 10 April 2006
Verified Purchase
As you can already tell by the comments, there is a "clash of cultures" in the academy. It's between:

* People who think philosophy's job is to expand ideas and challenge, versus those who think it should make the present seem more comfortable and make you nod your head in recognition.

* Those who think that gender is relatively unimportant and that work stands for itself; versus those who believe that "to introduce the question of woman changes everything".

* Those who believe that the canon of Western philosophy is adequate to describe the world, and those who believe it has never described the world because it never took the time to understand those that never lived in "the west"

You get the idea. If you are in the first category of these tensions then there's no point you reading this book. It will confirm all your prejudices.

If the second half of the statements above sounds more like you, then you probably already know this book. But in case you "haven't quite got to it yet", as I hadn't for a while, I can say that this is a book that will reward many detailed readings. It's breadth and depth is breathtaking in an era where the very real problems of generalisation raised by gender/race/colonial analysis have caused many to back away from theorising world systems. As Spivak carefully shows, these systems ("the financialsiation of the globe" - who among the critics could elaborate with such detail on the distinctive impact of informational capital on the rural?) are very much in operation and urgently need to be thought - but never at the expense of forgetting those whose labour is appropriated by those systems. For all the dense theoretical language in the text, Spivak is obviously in a discussion with, for example, the indigenous activist, unlike many of her critics, who complain about her language yet never demonstrate their engagement with e.g. the rural poor.

Let's talk about the language. Yes, it's intimidating. It's philosophy! She's a professional philosopher, that's her job! If you're going to understand the insights of a physicist you'd have to prepare yourself by doing a lot of reading (and experimenting). If you were going to understand a physicist who was pushing the boundaries of the discipline you are probably going to have to be a physicist yourself or be very, very, very interested in the field. As it should be - if I understood what physicists were really doing I'd be worried, given that they study for so long and get all that research money for labs when maybe I could do this in my garage. Despite 15 years of reading social theory (not all the time - I'm not an academic at the moment) I struggled heavily through the first chapter of this book on Kant and Hegel (I know some Hegel, only a little Kant). I'd read two pages and think "I'm not sure I get that, but I'll read it again tomorrow and move on to the next bit anyway." If you're a feminist philosopher I'm sure you'd be going much easier. But the point is, I didn't take it as a reason not to read it - it was a challenge for me to expand my understanding about stuff I thought I knew (e.g., Marx), that she has obviously thought a lot more about than me.

When it got to some things I do know something about (e.g. colonial rhetoric, technology and development), her insights were both revelatory and in accord with my experience at the same time. Anyone with a philosophical bent who has experience in the development field will be troubled by the very convincing case Spivak makes in chapter 4 for development as an instantiation of imperialism. As someone who reads the relevant journals from time to time I have yet to hear anyone with expertise in philosophy and cultural studies outline why Spivak doesn't know what she is talking about, as the Terry Eagleton fan suggets. She does all too well, in a way that intimidates those who made a living pretending they had the answers.

Spivak obviously knows that she's good and the suffer-no-fools tone - some have described it as elitist - might be irritiating for some. I prefer to see it as a persistent frustration with the limitations of language, and an attempt to convey that to the reader. This is not "bad writing". It is very carefully crafted (there are some fantastic, pithy sentences at times) to destabilise the assumptions she knows readers are going to make about the work. If you want to read someone who'll make it all easy, try Andrew Ross (one of my favourite authors, but completely different methodology as befits an American Studies prof).

If you've never read Spivak and aren't completely at home in philosophy and theory, this might not be the place to start. Maybe begin with Landry & Maclean's Spivak Reader and any of her interviews (there's a great one from the journal Signs which is available online). Outside in the Teaching Machinemight be easier after that. But if you are looking for big, challenging ideas that will shift your world-view, this will do it.

As you can tell, I love this book. I think it's a landmark work from someone who is trying to think the world with knowledge and experience of places that previously well-known "world thinkers" never had. It attempts to bring an incredible range of examples and texts into productive conversation. It kind of depresses me because I know I could never write it, yet even by reading it I am no longer as comfortable in subconscious generalisations that Euro-US culture relies on, and that this distances me from some ideas and people. But it has also sharpened my sense of what is important, of where I can make a difference, of what writing can do inside and outside of the academy. It's a great gift if you're prepared to receive it.
Read more
66 people found this helpful
Report abuse
See all reviews
Back to top
Get to Know Us
Make Money with Us
Let Us Help You
And don't forget:
© 1996-2021, Amazon.com, Inc. or its affiliates