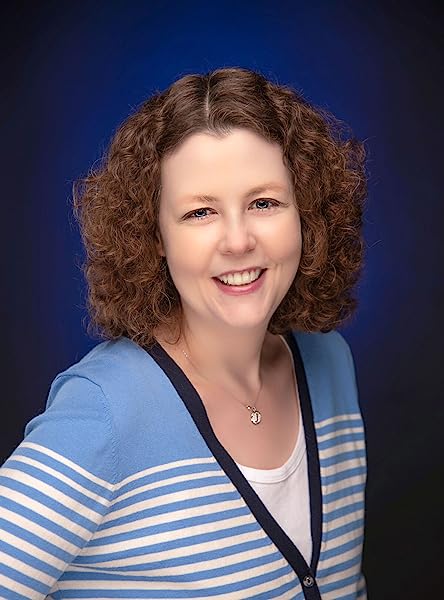 by Jennifer Estep (Author)
4.6 out of 5 stars 168 ratings
See all formats and editions
Sorry, there was a problem loading this page. Try again.

New York Times bestselling author Jennifer Estep is constantly prowling the streets of her imagination in search of her next fantasy idea. Jennifer is the author of the Black Blade and Mythos Academy young adult urban fantasy series for Kensington. She writes the Elemental Assassin urban fantasy series for Pocket Books and is also the author of the Bigtime paranormal romance series. Jennifer is a member of Romance Writers of America, Science Fiction and Fantasy Writers of America, and other writing groups. Jennifer's books have been featured in Cosmopolitan, Entertainment Weekly, Southern Living, and a variety of other publications. To learn more about her, visit jenniferestep.com. You can also sign up for Jennifer's fan page on Facebook and follow her on Twitter and Goodreads.
Start reading Crimson Frost (Mythos Academy Book 4) on your Kindle in under a minute.

4.6 out of 5 stars
4.6 out of 5
168 global ratings
How are ratings calculated?
To calculate the overall star rating and percentage breakdown by star, we don’t use a simple average. Instead, our system considers things like how recent a review is and if the reviewer bought the item on Amazon. It also analyses reviews to verify trustworthiness.

Kindle Customer
5.0 out of 5 stars Oh my NIKE!!
Reviewed in the United Kingdom on 12 October 2013
Verified Purchase
AHHHH!! Was the first words to leave my lips once I discovered what the stupid Spartan did. I love the series nd recommend this to anyone of my age or older (15) I love the characters and everything about it, my favourite character is OBVIOUSLY Daphnie (Can't spell) because she's a vikyear (Again can't spell) and she always sticks up for her friends. Dying from atitipation isn't the words to describe how I'm feeling... it's more like: AHHHHH NEXT BOOK AHHHHH.
Read more
Report abuse

Mina
4.0 out of 5 stars Bad times for Gwen – great times for the reader! The series' best book yet.
Reviewed in Germany on 5 May 2015
Verified Purchase
Note: this is the 4th book of the “Mythos Academy” YA series and all books rely heavily on each other content-wise. So I don't recommend to start here, but with “Touch of Frost”.

After the last book, I admittedly thought about quitting the “Mythos Academy”. I was furious about Gwen's stupid actions and didn't know if the series could redeem itself for me. Good thing I hung onto it, because yeah, Gwen and friends are back at their best. I loved “Crimson Frost”.

There are just a few pages deceptively going slow at the very beginning, actually Gwen and Logan are having a date at some coffee shop and just when I let myself sink back in my couch preparing for kisses and sweet-talking of the young couple, Gwen's world gets turned upside down. Technically speaking, Gwen gets arrested by the “Protectorate”, the police and judicial body of the Pantheon and a truly Kafka-like episode starts, a veritable nightmare, in which Gwen is accused of being a Reaper and having helped Loki get free. Well, she did, but she was tricked into it. But these Protectorate representatives seem to already have rendered judgment and Gwen even has to fear for her life, since found guilty, she could be executed.

But although the threat is immense, the worst is the Protectorate's public announcement of said charges – if Gwen was an outsider before, she is now the hated Reaper-b**ch and I suffered alongside her. But I also admired her for the dignity she shows and her perseverance. She puts people around her to shame. In this book, Gwen finally is the heroine I hoped her to be. She has a spine made of steel, acts levelheaded and yet knows when it's time for defiance and action. Awesome.
But thanks to her past actions, she is by no means alone in this situation and I always appreciate it, if a protagonist finds friends and allies in unlikely people and it is one of the strengths of this series that people change and are able to develop a new attitude. So it's all of Gwen's friends on her side, new ones and the known guys, but it's nearly too late when they are finally able to get behind what's going on. There is severe treachery and a showdown between people I never ever would have suspected to ever be on opposite sides.

They're hard decisions Gwen has to take, but she does and – as is stated so often – out of her own free will, no less. The final showdown is close to epic and shows everyone's qualities. So why four instead of five stars? The book nearly had it all for me and then some. It even robbed me of a night's sleep because I so had to know what would happen. But there is Logan. Yeah, he is a good guy throughout the book, fighting beside Gwen, standing up for her – and then something admittedly really really bad happens and the love interest shows that he prefers the coward's way out. I don't want to spoil it, but you'll know exactly if you get to that part. That and the aggravating repetitions of some phrases. Maybe it's worse, if you read the whole series in one sitting, as I'm doing right now, but there are sentences and descriptions I just am fed up with and wished I didn't have to read them any more. It's the fourth book, if I haven't gotten it by now, I'm a lost case anyway.

But all rather minor complaints aside, this is a really suspenseful and well constructed book and a good addition to the “Mythos Academy” series.
Read more
Report abuse

Amazon Customer
5.0 out of 5 stars Crimson frost
Reviewed in Canada on 7 January 2020
Verified Purchase
Book 4 of the Mythos academy. I really enjoy reading all the books from this serie. Jennifer Estep is just a great author.
Read more
Report abuse
See all reviews
Back to top
Get to Know Us
Make Money with Us
Let Us Help You
And don't forget:
© 1996-2021, Amazon.com, Inc. or its affiliates