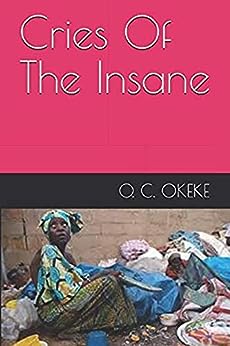 Cries Of The Insane Kindle Edition

by O. C. OKEKE (Author) Format: Kindle Edition
See all formats and editions
Sorry, there was a problem loading this page. Try again.

"Souls of many insane (Victims) in Africa are crying, seeking for recognition of their sufferings and the causes of their being held insane as related to Bad Cultural Beliefs, Laws and Practices. Worst still, evil men who hide under bad cultural guise to multiply occurrence because of greed, pride, hatred and for monetary gains".

The contents of this book may seem fictitious, but they are not, for they are real life happenings, even still happening in this 21st century

Included in this book are True Cases of Insanity, Similar Problems Occurring Due To Bad Culture, Abusive Attitude Of People To The Insane, multiplication due to wrong Belief On Wealth, Notion about Bite, The secret cult connected to Insanity in Africa, Sanctions to the Victims, Bad cultural laws relating that multiply insanity cases, Real Insanity case happening at this moment, Advice to Insanity victims, Steps to reduce Insanity occurrence, and much more.

All activities surrounding insanity in African are based on torture, discrimination and hatred. An insane is still human though having disorder of the mind. Discrimination and torture to them are abuse of their human rights. What happens in Africa is that we not only torture the insane physically but also torture them mentally. Instead of providing cure, we are increasing the problem, hating them, driving them away from our company, disturbing them from sleeping, even hacking into their minds and making fun of them.

The insane (victims) are not able to come out to complain because they have been so badly suffered to extents that they loss their reasoning. Even where a newly tagged insane complains, people will deny the happening, feign ignorance or simply will not listen to them because of the tag (Mad person), a stigma which they have been forced to carry, often for many years. Look at every one of them, they full the streets, you will see them looking emaciated, wearing sad faces, dirty and in tattered clothing. All because of their suffering, torture, hunger and lack of care of many years.
Read more
Previous page
Next page