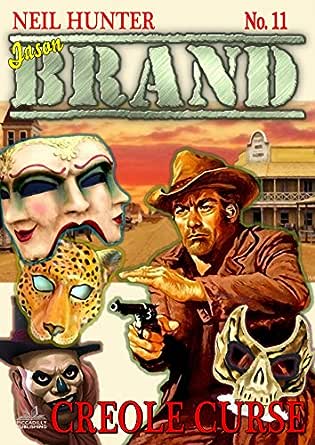 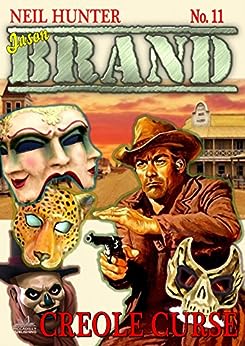 The mysterious disappearance of three women in New Orleans rings alarm bells right up to the steps of Washington itself. As one of the missing girls is the daughter of the powerful and well-connected Oliver Delacort, Jason Brand is ordered to discover the girls’ fate. In a very short time he soon discovers that Crescent City isn’t the prettiest of places. Brand meets with violent resistance from the get-go.
But they picked on the wrong man. Brand is a force to be reckoned with, and with his .45 primed and ready, those standing in his way of justice had better take care ... even those who practice the dark art of Voodoo! Neither gators nor ghosts are going to stop Brand in this blood-soaked adventure.

Kindle Customer
5.0 out of 5 stars WHAT'S IN THE CELLAR
29 January 2018 - Published on Amazon.com
Verified Purchase
Voodoo and blackmail is the plot of this action moving adventure involving our no nonsense Jason Brand. It seems his boss McCord assigns him some very weird assignments, which takes him anywhere in the United States. Blackmail with pictures showing New Orleans wealthy in comprising position, which would cause a lot of embarrassing situations, since New Orleans police higher ups were also involved in this blackmail.
Debauchery including opium and unusual unnatural sexual deviants performance...humans..
Excitement every page and chapter which only can be brought to a head Jason Brand style.

Amazon Customer Lavonne Jones
5.0 out of 5 stars GREAT READING
23 November 2016 - Published on Amazon.com
Verified Purchase
NEIL HUNTER HAS AGAIN GIVEN US A GREAT WESTERN STORY WITH BELIEVABLE CHARACTERS TO FOLLOW. I LOVE TO LOSE MYSELF IN HIS BOOKS. RELAXING, ENJOYABLE, AND LEAVING YOU WANTING MORE. THANK YOU. KEEP ON WRITING. LAVONNE JONES
Read more

Brian Brown
1.0 out of 5 stars Downluoad
13 June 2017 - Published on Amazon.com
Verified Purchase
Only received half of the book and couldn't ever get the rest to appear! This was getting to be a problem.
Read more

Amazon
4.0 out of 5 stars Four Stars
29 April 2017 - Published on Amazon.com
Verified Purchase
ok, not great
Read more
Go to Amazon.com to see all 4 reviews 3.6 out of 5 stars
Get FREE delivery with Amazon Prime
Prime members enjoy FREE Delivery and exclusive access to movies, TV shows, music, Kindle e-books, Twitch Prime, and more.
> Get Started
Back to top
Get to Know Us
Make Money with Us
Let Us Help You
And don't forget:
© 1996-2020, Amazon.com, Inc. or its affiliates