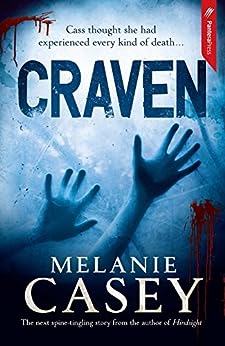 by Melanie Casey (Author) Format: Kindle Edition
See all formats and editions
Sorry, there was a problem loading this page. Try again.
A RELUCTANT PSYCHIC, A TROUBLED DETECTIVE… AND A DEEPLY TWISTED SERIAL KILLER

CASS THOUGHT SHE HAD EXPERIENCED EVERY KIND OF DEATH

Moving to the city, Cass Lehman hoped to leave her recent notoriety behind her. Her ability to experience the final moments of a violent death helped the local police capture a serial killer, but also meant she was almost his final victim...

With a place of her own and a new job, things are looking up for Cass. But just as she starts to feel settled, Cass is targeted by a deranged stalker.

Are the personal attacks linked to a string of unsettling deaths that have left the police stumped?

Her 'gift' is called on yet again by the one man she vowed she would never contact. Cass and Detective Ed Dyson are thrown back into each other's lives but can they overcome their feelings to put an end to the terror? A RELUCTANT PSYCHIC, A TROUBLED DETECTIVE… AND A DEEPLY TWISTED SERIAL KILLER.
Read more
Previous page
Next page

Marcia@Book Muster Down Under
4.0 out of 5 stars Well-written, Fast-paced and Engrossing
Reviewed in Australia on 13 April 2016
Can I just start this review off by saying that I am really loving this series! I’ve never really been a fan of stories told in series but these days I find myself reading more and more of them and, in particular, anticipating Melanie Casey’s next release.

With the third, Missing, already having arrived on my doorstep, I was compelled to read this one before venturing into the third so that I didn’t lose my way in terms of how reluctant clairvoyant Cass Lehman has developed.

Continuing the story a few months after Hindsight left off and Cass and Ed Dyson parted ways, Cass is still trying to come to grips with her gift off retrocognition and it seems that the more she uses it, the more she discovers about it, even if it does involve reliving the final moments of a victim’s death at the scene of a crime.

Having left the safe confines of her childhood home in Jewel Bay, she now lives in Adelaide (two hours away) and is currently a tutor at the Uni. When one of her new students recognises her, her tutoring position becomes entwined in her past and she finds herself the victim of a stalker.

Ed, the detective with whom she worked on a case in Jewel Bay (the one that made her a household name) is currently on secondment with the Major Crime Investigative Branch (MCIB), a division of the Adelaide Police, and has recently been presented with a case that’s proving to be far more complicated than he and his new partner, Dave, first thought. When Cass calls him for help after her car is defaced on the Uni’s premises, he’s not only surprised that she has moved to Adelaide but happy that she is trying to forge her way to independence.

It’s not long though before Ed’s undeniably familiar pull has Cass becoming embroiled in his investigation which involves trying to figure out the murder of a young man who appears to have been linked to a local Narcotics Anonymous Group. If there is a deranged serial killer on the loose how is Cass’ gift going to aid her and the police in bringing them to book?

Written from the perspectives of Cass in the first person and Ed in the third, we get a good feel for both of these characters as well as some spine-tingling moments that had me not wanting to go near any of the windows in my house while it was dark! Seriously!

Her characters are believable and she doesn’t take Cass’ gift over the top. Perhaps that’s what I like about the struggles and challenges that Cass is faced with in not only learning to accept that what she has been gifted with is important but that she is also pretty much an average human being.

Melanie is a great storyteller and, while she doesn’t know what it’s like to be a psychic, she conveys Cass’ ability and fears well. She also knows how to maintain the pace and suspense and there’s no denying that this series is going to take her places with lovers of the genre.

A well-balanced story that will take you along for a ride through the sights, smells and sounds of Adelaide as Cass and Ed follow the procedures of an investigation while discovering more about one another, this is a well written, fast-paced and engrossing second addition to the series.
Read more
Helpful
Report abuse

Shelleyrae
3.0 out of 5 stars A little uneven
Reviewed in Australia on 5 September 2014
Craven, by Melanie Casey, is the sequel to Hindsight, featuring Cass Lehman, a woman with the psychic gift of retrocognition, and South Australian police detective, Ed Dyson.

As the book opens we learn that Cass has taken the leap and left home, securing a teacher’s position at a college in Adelaide. Cass is hoping for a fresh start but during her very first lesson she is recognised by her students and almost immediately becomes a target of gossip and derision.
Ed is conspicuously absent, it seems their romance stalled in the intervening months, though we soon learn that Ed is also in Adelaide, working with a local command on a year long secondment, and when Cass’s car is painted in blood with ‘Freak’ scrawled across the windshield he is the first person she calls. Thrown together as Cass’s stalker grows more violent, Cass is inevitably drawn into Ed’s latest case – a search for a serial killer.

Though I still really like concept of this series I was disappointed by the execution of this novel. I had issues with the uneven pacing and with what I felt were several underdeveloped elements in the plot. There was too much focus on the mundane details of Ed’s often circular investigation, and the obnoxiousness of his new partner. The identification of the stalker taunting Cass seemed come from nowhere since he barely rated a mention in the story.

The killer did have an interesting story and his motivations were suitably dark and twisted. There were moments of high tension, though much of the real action is crammed into the last few chapters when Cass is once again at the mercy of an insane murderer.

Despite the flaws in Craven I am still intrigued by the potential of this series and I hope Casey regains her footing in the third installment.
Read more
One person found this helpful
Helpful
Report abuse
See all reviews

booklover
4.0 out of 5 stars An Australian Serial Killer
Reviewed in the United States on 15 February 2016
Verified Purchase
Cass Lehman is back with a vengeance. She's moved out of her family's home determined to come to terms with her special abilities and learn how to live on her own. She's working at the university as a tutor and enjoying it until someone discovers that she's the psychic that helped police catch a serial killer.

She's also coming to terms with the on and off again relationship with Detective Ed Dyson. Right now it's off and she's dealing with it. But now it seems she's being targeted by a stalker. First her car is tinkered with, tires are slashed, and now someone has broken in and trashed her apartment.

Meanwhile, Detective Dyson and his new partner following the deaths of several people. What looks like accidents may be murder... by drowning, by jumping off a building, by snakebite, by overdose, by being buried alive.

It takes Cass to make the connections that these people died by their worst fears. And as they seem to get closer to finding the person or persons responsible, they don't see how close they are to confronting their own deepest fears.

Solid performances by Cass and Ed. Ed is kicking himself for not committing to Cass. Cass has made a new friend, Claire, who plays a big part in this particular story. Dave, Ed's new partner is an arrogant ladies man .. but a fairly good detective. I look at him as the comedic relief.
I like this particular series. I think the characters are portrayed believably well. The suspense starts at the beginning and just builds and builds until it erupts in violence. A very satisfying conclusion.

Looking forward to reading the third and most recent in this series .. MISSING.
Read more
Report abuse

Claire H, Australia
4.0 out of 5 stars so I was pleased to see she had written another
Reviewed in the United States on 5 November 2014
Verified Purchase
I heard the author speak at Burnside library last year and immediately bought her first book, so I was pleased to see she had written another. This is an enjoyable and pacey story with likeable central characters. Great literature? No, but it certainly kept me engaged and entertained for a couple of days. While the previous book was set on the Fleurieu Peninsula, this one was set in Adelaide. I particularly enjoyed this as I live in Adelaide myself and so many of the places were very familiar. I will certainly look out for Melanie's third book.
Read more
Report abuse

Virtual Deb
5.0 out of 5 stars A great read
Reviewed in the United States on 26 June 2015
Verified Purchase
Another great story. Loved the balance between crime and interactions between the main characters.

Well written with a pace that keeps you reading. Can't wait for the next instalment.
Read more
Report abuse
See all reviews
Back to top
Get to Know Us
Make Money with Us
Let Us Help You
And don't forget:
© 1996-2021, Amazon.com, Inc. or its affiliates