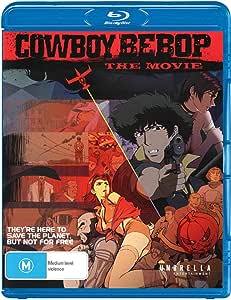 Secure transaction
Your transaction is secure
We work hard to protect your security and privacy. Our payment security system encrypts your information during transmission. We don’t share your credit card details with third-party sellers, and we don’t sell your information to others. Learn more
Details
Ships from
Amazon AU
Sold by
Amazon AU
New (4) from
$15.98 FREE Delivery on first order.

The year is 2071. When villains blow up a tanker truck on Highway One, a deadly virus is released, killing hundreds of innocent people. This is merely the beginning of a greater threat to human kind and, fearing a more devastating biochemical attack, a significant reward is offered for the successful capture and arrest of the evil culprits. Bored with their current situation Spike and his rag-tag crew of bounty hunters aboard the Spaceship Bebop accept the challenge wholeheartedly  determined to track down the bad guys one way or another and cash in their reward. Ahead of them is an adventure like nothing they have ever imagined. A cult spin-off from the successful TV series, brought to life by Shinichiro Watanabe and the famed Japanese Sunrise Animation Studios, Cowboy Bebop The Movie is an electrifying full-tilt trip into a vast, colourful and dangerous galaxy.

4.7 out of 5 stars
4.7 out of 5
1,499 global ratings
How are ratings calculated?
To calculate the overall star rating and percentage breakdown by star, we don’t use a simple average. Instead, our system considers things like how recent a review is and if the reviewer bought the item on Amazon. It also analyses reviews to verify trustworthiness.

Alysha
1.0 out of 5 stars Don’t buy unless you understand Japanese lmao
Reviewed in Australia on 5 January 2021
Verified Purchase
It is not English dubbed
Read more
One person found this helpful
Helpful
Report abuse
See all reviews

Ronin71
5.0 out of 5 stars Great movie on its own, even better if familiar with the Cowboy Bebop anime series
Reviewed in the United Kingdom on 18 May 2019
Verified Purchase
To get the full experience you really need to be familiar with the Cowboy Bebop canon and have watched the Anime series (26 episodes), the film slots into the timeline around episode 22 - 23, that being said, it does not distract from the enjoyment of the movie overall as it stands alone on its own merits and can be watched without prior knowledge of the cowboy bebop universe, highly recommended.
Read more
4 people found this helpful
Report abuse

Callum
5.0 out of 5 stars A fantastic addition for the series
Reviewed in the United Kingdom on 22 September 2018
Verified Purchase
This is going to be a review of the case and extra content because I assume that, if you are thinking about buying this show, you've already see it and have decided you liked it enough to purchase the physical copy.
The case is nothing special. Holds the disc and has nice artwork, can't ask for much else.
There are a lot of extras on the disc. Details that go into each character as well different objects (e.g. the different space ships).
This is the best the series has ever looked and is a must buy if the like the show.
Read more
One person found this helpful
Report abuse

David
5.0 out of 5 stars Excellent movie with Excellent service
Reviewed in the United Kingdom on 17 August 2017
Verified Purchase
Before I begin let me just say anime I can take or leave... however Cowboy Bebop is so addictive as movie and as series. If you have note see either, I truly recommend that you do...
Great characters, great story telling, great score and of course great animation. All these elements will have you revisiting again and again.

The service was excellent, two times previously I ordered this, waited two weeks and still no show. Extremely frustrating, but then thanks to musicmagpie not only the condition was fab, but I received it extremely early. Thank you so much music magpie!!!
Read more
5 people found this helpful
Report abuse

I was worried before watching it that it was going to spoil me about the ending of the series (so I finished watching the series first) however it take place between episodes 22-23 so if that concerns you have no worries! It's in glorious 16:9, which I really appreciated. The VA is great as to be expected, and there's multiple nods to running gags that appear throughout the show. I know this is really nit-picky but one thing that I would've preferred would be that they had beef and bell peppers rather that instant noodles, but alas they chose to leave that little bit out. Not to worry though because it's a fantastic action movie which really keeps you at the edge of your seat with two great femme fatales and plenty of comedy sprinkled throughout! :)
Read more
One person found this helpful
Report abuse

Liz
5.0 out of 5 stars Anime perfection
Reviewed in the United Kingdom on 1 February 2008
Verified Purchase
There is a reason while Cowboy Bebop has been enormously popular in Japan as well as Europe and the States - that reason is because it is brilliant. The animation is beautiful - certainly better than the TV series due to the bigger budget - but this is matched by the excellent story line and voice acting. If only a lot of the cruddy American and European films and TV series showed the same dedication to the writing quality! The English dub (which, if you're honest, can be pretty horrible or laughable in some anime films) is also very good. In short, the story is set a little time before the end of the series, and concerns an apparently random terrorist act on Mars that leads to an irresistable bounty, a very dangerous antagonist and a high level conspiracy. The charactisation of the main protagonist - Spike Spiegel - as well as his 'friends' on the ex fishing vessel the Bebop, is so good in this film that pre-existing knowledge of the series is not necessary. The writing is so good that you may even feel a twang of understanding for the bad guy. The action sequences are pretty exciting and not a frame of film is wasted. After watching this, I went off the buy the series because I just needed more!

Of note are the extras. There are interviews with both the Japanese and English voice cast, as well as an interesting section that compares the storyboards with the final animation (cool if you're an anime afficianado). The music is ace too - take note of the Yoko Kanno who's worked on a number of anime films and series.

At this budget price, it's nothing short of a crime to not have this in your collection.
Read more
3 people found this helpful
Report abuse
See all reviews
Back to top
Get to Know Us
Make Money with Us
Let Us Help You
And don't forget:
© 1996-2021, Amazon.com, Inc. or its affiliates