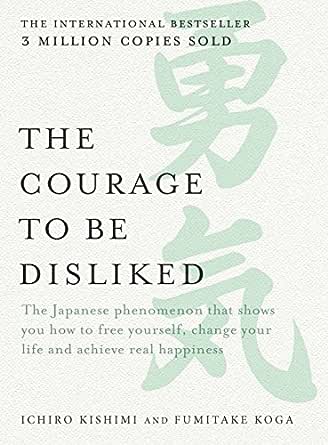 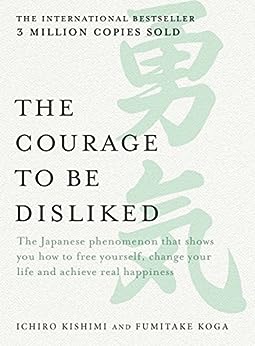 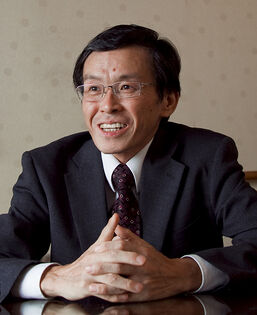 The Courage to be Disliked: The Japanese phenomenon that shows you how to free yourself, change your life and achieve real happiness Kindle Edition

Ichiro Kishimi was born in Kyoto, where he still lives, in 1956. He has aspired to become a philosopher since his days in high school. Since 1989, while specialising in Classical Western philosophy, with a special focus on Platonic philosophy, he has researched Adlerian psychology; he writes and lectures on the subject, and provides counselling for "youths" in psychiatric clinics as a certified counsellor and consultant for the Japanese Society of Adlerian Psychology. He is the translator, into Japanese, of selected writings by Alfred Adler: Kojin Shinrigaku Kogi (The Science of Living) and Hito wa Naze Shinkeisho ni Naru no ka (Problems of Neurosis), and he is the author of Adora Shinrigaku Nyumon (Introduction to Adlerian Psychology), in addition to numerous other books.


Fumitake Koga, an award-winning professional writer and author, was born in 1973. He has released numerous bestselling works of business-related and general non-fiction. He encountered Adlerian psychology in his late twenties, and was deeply affected by its conventional wisdom-defying ideas. Thereafter, Koga made numerous visits to Ichiro Kishimi in Kyoto, gleaned from him the essence of Adlerian psychology, and took down the notes for the classical "dialogue format" method of Greek philosophy that is used in this book.
--This text refers to the paperback edition.

4.5 out of 5 stars
4.5 out of 5
270 global ratings
How are ratings calculated?
To calculate the overall star rating and percentage breakdown by star, we don’t use a simple average. Instead, our system considers things like how recent a review is and if the reviewer bought the item on Amazon. It also analyses reviews to verify trustworthiness.

Tamara
5.0 out of 5 stars Unhappy with your life direction read this book
Reviewed in Australia on 27 June 2018
Verified Purchase
Great book which is written in dialogue form or a philosopher and young man. Excellent as the questions that one would have about concepts are answered succinctly. The concepts are deep but it is clear how this can bring about a change of the world from ones eyes. Dancing with moments ❤️
Read more
9 people found this helpful
Helpful
Comment Report abuse

Manan.cm.au
TOP 1000 REVIEWER
5.0 out of 5 stars Simple - Surprising & effective
Reviewed in Australia on 29 May 2019
Verified Purchase
This book is a dialogue between a philosopher and youth in which youth is facing a "crisis of meaning" . Kishmi illustrates a firm standpoint and simple answers for complex questions relating to meaning of life.

I have never been a fan of Freudian psychology and it was good to hear a good refutation by Adler.

Whats surprising is that why such a Gem like Adler never made it to the mainstream.

This book is great read. I would definitely recommend ...

AdamMetcalfe
5.0 out of 5 stars Careful! This book may change your beliefs!!
Reviewed in Australia on 21 September 2018
Verified Purchase
I enjoyed the narrative between the philosopher and student in this book. It definitely challenged my views of teh world, and while you wont get a "quick fix" solution (but is there ever such a thing!). I have started to change my mindset based on the individualism concepts presented and it fits better with me.
Read more
5 people found this helpful
Helpful
Comment Report abuse

frank
5.0 out of 5 stars Excellent
Reviewed in Australia on 2 February 2019
Verified Purchase
What a fantastically told story between teacher and student, combining philosophical and psychological theory with real world practice and demonstration of how the the two can merge in the face of hurdles and adversity to an effective outcome. I highly recommend this book to anyone looking to improve their lives.
Read more
2 people found this helpful
Helpful
Comment Report abuse

Alex N
4.0 out of 5 stars Very useful, might just change how I see things!
Reviewed in Australia on 31 May 2020
Verified Purchase
Okay, so I actually didn't read through the whole book the first time, possibly as the earlier ideas in the book are ideas that I had already understood as there are similar ideas in Stoicism.
This time I persisted all the way to the ahead, only taking 1 day to read, and I've highlighted so many parts too! Learning about the difference between vertical and horizontal relationships and the separation of tasks will be useful in the years to come.
The book is a little frustrating at first, but then it is written as a continual discussion/argument so naturally there are points of frustration, like you would have observing one in real life. But you end up with a satisfying conclusion.
Read more
One person found this helpful
Helpful
Comment Report abuse

Kristie Morrison
5.0 out of 5 stars Loved it
Reviewed in Australia on 5 September 2018
Verified Purchase
Whether you are interested in philosophy or psychology this book is a fascinating read. I thoroughly recommend it as an invaluable insight into what it takes to live a happy life.
Read more
2 people found this helpful
Helpful
Comment Report abuse

Niall O'Brien
1.0 out of 5 stars I gave up
Reviewed in Australia on 23 September 2020
Verified Purchase
I got through to approximately 30% of the book & became bored so I stopped reading.its designed to challenge your thinking. I found it a challenge to keep reading. Hope you faired better than me.
Read more
Helpful
Comment Report abuse

Peter Brimelow
5.0 out of 5 stars Challenge yourself
Reviewed in Australia on 10 May 2018
Verified Purchase
Thought provoking. The disciplines required to be happy, easily understood, you only need the courage.
A book to be read over and over again.
Read more
5 people found this helpful
Helpful
Comment Report abuse
See all reviews

Lorenzo Galanti
5.0 out of 5 stars Inspiring. Totally worth reading and re-reading
Reviewed in Italy on 22 April 2019
Verified Purchase
I was not aware of Adlerian doctrines before reading this book. Therefore, its apparently counterintuitive notions came largely as a positive surprise. The idea, for instance, that trauma does not exist per se but as a narrative that was created by ourselves to fit an interpersonal relations problem is eye-opening and refreshing, and full of consequences. So is the fundamental principle of task separation.
I thoroughly recommend this book to anyone looking to critically improve their own lives in concrete way.
Read more
Report abuse

Bill Roberts
5.0 out of 5 stars Excellent approach to making Adler accessible to general readership
Reviewed in Canada on 20 January 2020
Verified Purchase
The format was entertaining yet serious enough for anyone with a background in Psychology and it has lead to the purchase of several books by Adler, particularly the book What Life Could Mean to You which also gets an excellent rating.
Read more
Report abuse

Gigi Nasr
5.0 out of 5 stars Amazing BOOOk’!
Reviewed in Mexico on 8 September 2018
Verified Purchase
Amazing BOOk, I fell in love with the Adlerian psychology. Dancing in the here and now, enjoying the moments of life are just our way to empowering ourselves contributing to others. <3
Read more
Report abuse

Kindle Customer
1.0 out of 5 stars Wish I would have just picked up a book on Adlerian Psychology
Reviewed in the United States on 13 September 2018
Verified Purchase
I understand why the authors chose a dialogue format, but it didn't work very well. Half of the youth's responses consisted of the last line or phrase the philosopher used with a question mark slapped on the end, which was infuriating. That's not realistic dialogue. I would have preferred the philosopher going on an endless rant. The youth also gave in too easily to the philosopher's points for them to be convincing. The examples used either by the philosopher to illustrate his points or the youth to refute them were either too specific(leading to many "Well, what if"s in my mind) or too vague to really drive the point home
Read more
93 people found this helpful
Report abuse

Jeff
5.0 out of 5 stars Amazing book that promotes an uncommon view on relationships. Audible > Book, although you can't go wrong with either.
Reviewed in the United States on 6 July 2018
Verified Purchase
The ideas in this book and the format in which it is delivered is a much welcome change from other self-help books.

The style is done as a narration between a young man and an older philosopher. It reads as a conversation, not as your traditional Western self-help book which all seem to follow a similar format as:

1.) Here's the problem and how you're feeling/why you're reading this book
2.) Here's my experience with it and why you should trust me
3.) Here's some stories/example/data to back it up

There is some value in that format, but I much prefer this format as it's less about do X, Y, and Z and everything will be great and more of a framework for interpersonal relationships.

I think this book is especially good for what our culture has turned into, with near total political correctness and an immense value on others opinions via social media.

I have the ebook and Audible of this. I'm glad I have both as this is a book I plan on revisiting time and time again. But if you have to get one, go for the Audible version. The voice narration is spot on and really captivates the essence of a conversation better.
Read more
104 people found this helpful
Report abuse
See all reviews
Get FREE delivery with Amazon Prime
Prime members enjoy FREE Delivery and exclusive access to movies, TV shows, music, Kindle e-books, Twitch Prime, and more.
> Get Started
Back to top
Get to Know Us
Make Money with Us
Let Us Help You
And don't forget:
© 1996-2020, Amazon.com, Inc. or its affiliates