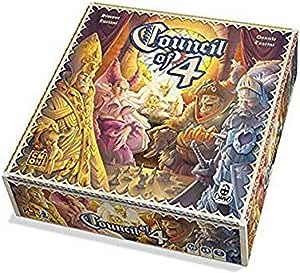 Brand: CoolMiniOrNot
4.4 out of 5 stars 30 ratings
Secure transaction
Returns Policy
Amazon-managed Delivery
Your transaction is secure
We work hard to protect your security and privacy. Our payment security system encrypts your information during transmission. We don’t share your credit card details with third-party sellers, and we don’t sell your information to others. Learn more
Amazon-managed Delivery
Amazon manages delivery by using preferred couriers/agents. Order delivery tracking to your doorstep is available

The Empire, formed by three Kingdoms, has a period of wealth and prosperity. Each Kingdom is governed by a council of four nobles. The members of six influential families sit around in the councils and lead the Kingdoms. Players hold the roles of rich merchants who seek to obtain permits to build their own Emporium inside the cities of the three kingdoms. Whoever take more permits, while also placing their Emporium in the best places, will be the most famous merchant and will win the game. But pay attention to the Emperor. He can allow you to build without permits. On a turn in Consiglio dei Quattro ("Council of Four"), a player can perform different actions: The main action is to corrupt a council, which is represented by a slide with four noble's pawns. By corrupting the three Kingdom's councilors, the player gets permits cards that give various instant and game end benefits, and the possibility to build an Emporium in a specific city. Another action is to play a permission card to build an Emporium. Each emporium earns the player the special benefits of the space where it's built, but also activates all connected emporiums, with a chain effect. Corrupt the Emperors council to allow a player to build Emporiums without permission cards. Players can change the composition of a council. There are many different way to earn points: Build a connected Emporium in the cities that earn points. Build your emporium in all the city of an area of the board area: faster you complete the area more points you earn. Move up on the nobilitys track Obtain permits that give points The board is modular and has eight possible combinations.

4.4 out of 5 stars
4.4 out of 5
30 global ratings
How are ratings calculated?
To calculate the overall star rating and percentage breakdown by star, we don’t use a simple average. Instead, our system considers things like how recent a review is and if the reviewer bought the item on Amazon. It also analyses reviews to verify trustworthiness.

David Cassel
1.0 out of 5 stars Shipped a Damaged Game
Reviewed in Canada on 5 September 2020
Verified Purchase
Game box was crushed inside a pristine shipping box. Why would anyone ship that?
Read more

1.0 out of 5 stars Shipped a Damaged Game
Reviewed in Canada on 5 September 2020
Game box was crushed inside a pristine shipping box. Why would anyone ship that?
Images in this review

william peteresen
4.0 out of 5 stars Beautiful Reprint of a Solid Euro-Game!
Reviewed in the United States on 14 July 2018
Verified Purchase
Council of Four is CMON's stunning reprint of a near-classic Euro-game!

In Council of Four, players play merchants trying to build a trading empire to score Victory Points. Yes, like so many Euros, there is NO theme (but the beautiful production quality from CMON helps compared to the original..). Nevertheless, the game's mechanics are solid and clever.

The way players build their mercantile empire is by doing "Main Actions" and "Quick Actions.." The goal being to place your merchants in the various cities. Each city has a color and a letter (A-O). Furthermore, each city gives the player a special power, ability or set of victory points randomly determined at the start of every game. But most importantly, and the game's best mechanic, is that when you place your merchant in a city, and gain it's ability/action/VP, you can then set of a CHAIN REACTION! You get to RE-ACTIVATE every city that is DIRECTLY CONNECTED to the city (by road) where you just placed your merchant, and contains one of your merchants placed on a previous turn! And this happens EVERY time you're able to do this! By clever placement and planning you can set of abilities again and again for massive VP gains and power plays! It's a really clever mechanic an interesting twist on 'engine building.'

The most important main action (and manner in which merchants are placed) is activating the four city councils in the game. Each city council gives the player access to a 'permit tile' . The permit tiles are lettered A-O, matching the cities on the map. These permit tiles allow the player to place merchants in those cities who match the letters on the permit tile. To acquire a tile, a player must activate a council.

Each council is made up of (random) four of the six colored council members: beautifully sculpted miniatures in blue, yellow, purple, grey, green and brown that represent an aspect of (a fantasy) society-nobility, church, knights, merchants, pirates and politicians. The figure/color make up of each council is randomly determined at the start of the game. To activate a council, and gain access to it's permit tile, players will play 'political cards' (randomly dealt/drawn during the game)colored cards that match the six colors of the potential 4-member of a council. For example, to activate a green, brown, grey and yellow council, a player would play (as an action) a set of green, brown, grey and yellow cards and take the tile connected to that council; card order doesn't matter just the colors. You can also substitute money (at a very high rate) for up to three cards.

Another Main Action a player can do is to 'elect" a council member. This allows players to add/remove one member of a council and thus change the color make up of that council! Council members are added strictly from left to right. An added council member pushes off the council member on the furthest right space-players don't get to choose the removed council member, only the one they place!. This is a key/critical action, as it allows players to set up the color code needed to activate the various councils for a later turn, but beware! Other players can do the same thing and mess up your plans! Which will happen often! This creates a lot of tension every turn as players compete try to set up the perfect color combination and dash their opponents plans!

There's also a Queen figure (beautifully sculpted of course) who has her own council (which can adheres to all the rules for council activation/changing members) that players can use (move) to help them place their merchants in various cities. The queen allows a player to place a merchant in a city without a permit tile, BUT she must travel to the city you wish to place your merchant by road. However, travelling by road is expensive, and costs the player 2-gold PER road the queen must travel!

There are also Servant Tokens which can be acquired through various means in the game. Servant tokens allow players to spend them for various (optional) quick actions. Quick actions include spending servant to elect a council member (instead of using cards and/or money), to change the business tiles offered by a particular council, or spend 3x servants to do an additional main action!

And finally, there is a nobility track (along with a money track) on a separate board. Rising up the nobility track (through various means in the game) gives the player bonuses at certain levels.

Victory points are gained in many, many ways! By being the first to place a merchant in every city of one color gains a 'queens reward', worth up to 25 points, and a region tile (certain colors are worth more then others) worth up to 20 points! Through clever planning, a player can gain up to 45 points in one move!!! Some cities can give VPs every time their activated. The permit tiles have a random amount of VPs printed on them. The nobility track award players VPs depending on who is highest, second highest and so forth. Also, having the most permit tiles and merchants on the board at end game generates VPs.

About the only flaw in the game, and it's typical of many, many euros (and hence loss of a star) is the lack of theme! The CMON version, through art and terrific miniatures tried very hard to fix this, but falls short. The game can/will seem very dry and 'mathy' to some and I fully understand. But, for me, this is one of the few dry, themeless euro-games that has good enough mechanics to keep me interested and worthy of a purchase!

Analysis Paralysis
5.0 out of 5 stars Fun, well designed reprint! Tiny cards....?
Reviewed in the United States on 7 November 2018
Verified Purchase
Have played this now 2 player and 4 player. Nevet played the original printing but this one is outstanding. Expect nothing less from CMON. Great mini's, excellent components/cards, just a well designed reprint. The only negative I have is the card size. I sleeve all my games and this one used the yellow, mini American from Fantasy flight. Same size as the small cards in Star Wars Rebellion, fyi. They are just too small in your hand and would have liked at least a european size card. Other than that, this game is fun, thinky but not so much there is down time. Highly recommend for any game group!
Read more
One person found this helpful
Report abuse

Keith
4.0 out of 5 stars Fun Game/Keeper
Reviewed in the United States on 15 August 2019
Verified Purchase
Fun game. Looks cool. Only game I have that has anything resembling miniatures. Good with two players. Recommend.
Read more
Report abuse
See all reviews
Get FREE delivery with Amazon Prime
Prime members enjoy FREE Delivery and exclusive access to movies, TV shows, music, Kindle e-books, Twitch Prime, and more.
> Get Started
Back to top
Get to Know Us
Make Money with Us
Let Us Help You
And don't forget:
© 1996-2020, Amazon.com, Inc. or its affiliates