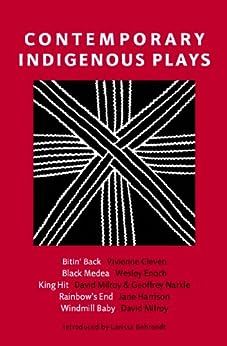 ‘Each play is a durable, resilient stone that both builds upon Indigenous traditions but also lays the foundation for the generations that will follow.’ — Professor Larissa Behrendt, from her introduction.

Bitin’ Back by Vivienne Cleven is adapted from her award-winning novel of the same name. ‘This is a zany and uproarious black farce’ — National Indigenous Times

Black Medea by Wesley Enoch is a richly poetic adaptation of Euripides’ Medea that blends the cultures of Ancient Greek and indigenous storytelling to weave a bold and breathtaking commentary on contemporary experience.

King Hit by David Milroy and Geoffrey Narkle strikes at the very heart of the Stolen Generations, exploring the impact on an individual and a culture when relationships are brutally broken.

Rainbow’s End by Jane Harrison is set in the 1950s on the fringe of a country town. This is a thought-provoking and emotionally powerful snapshot of a Koori family that dramatises the struggle for decent housing, meaningful education, jobs and community acceptance.

Windmill Baby by David Milroy: Set on an abandoned cattle station in the Kimberley landscape, this one-woman play combines the poetry of a campfire story with the comedy of a great yarn.
Read more
Previous page
Next page

VIVIENNE CLEVEN was born in 1968 in Surat, Queensland. Her nation is Kamilaroi. She left school at the age of thirteen to work with her father as a jillaroo: building fences, mustering cattle, and working at various jobs on stations throughout Queensland and New South Wales. Her novel, Bitin' Back, won the David Unaipon Award in 2000, and was shortlisted for the Courier-Mail Book of the Year Award and the South Australian Premier's Award for Fiction in 2002. Her novel Sister's Eye, published in 2002, was chosen in the 2003 People's Choice shortlist of One Book One Brisbane. Bitin' Back is her first play.

WESLEY ENOCH is the eldest son of Doug and Lyn Enoch who hail from Stradbroke Island. His writing credits include The Sunshine Club, The Seven Stages of Grieving (co-written with Deborah Mailman) and Black Medea all of which he also directed; and The Story of the Miracles at Cookie's Table which won the 2005 Patrick White Playwrights' Award. Enoch has been Artistic Director of Kooemba Jdarra Indigenous Performing Arts, Artistic Director of the Queensland Theatre Company, a Resident Director with the Sydney Theatre Company and is the current Artistic Director of the Sydney Festival. His extensive credits as a director include the premiere production of Stolen and a revival of The Cherry Pickers, both of which toured internationally, Capricornia, The Dreamers, Conversations with the Dead, Romeo and Juliet, Fountains Beyond, Black-ed Up, The Sapphires, Rainbow's End, Eora Crossing, Bitin' Back and Riverland. In 2002 Enoch was the recipient of a Cite Internationale des Artes residency in Paris. Other awards include a Matilda Award (The Sunshine Club 2000), Variety Club of Australia (Theatre Heart Award 2000), '98 Queens Trust Award, '97 Young Australian of The Year (Queensland Arts Section).

DAVID MILROY was born in Perth Western Australia in 1957. Milroy's family links are with the Injibarndi and Palku people of the Pilbara. Formerly Artistic Director of Yirra Yaakin Noongar Theatre, Milroy has been involved in theatre in Western Australia for a number of years as a musician, director and writer. His writing/directing credits include: King Hit, Runumuk, One Day in '67 and No Shame. He provided musical direction for Sistergirl and Dead Heart (Black Swan Theatre Company) and Perth Theatre Company's production of Wild Cat Falling. He co-wrote and directed Sally Morgan's hit play Cruel Wild Woman and Barking Gecko's production of Own Worst Enemy for the Festival of Perth.

GEOFFREY NARKLE was born in Narrogin, Western Australia in April 1951. King Hit chronicles his life from mission kid to manhood, traveling throughout Western Australia as part of Stewart's boxing troupe where he was known as the Barker Bulldog. In 1993 he became a pastor at the Aboriginal Evangelical Church, Balga, and was a respected and strong presence in the Noongar community. He married Glenys Narkle and they had four children: Bradley, Geoff Jnr, Vanessa and Melanie. Geoffrey Narkle died in August 2005.

JANE HARRISON, a Muruwari descendant, was commissioned by Ilbijerri Theatre Co-operative to write Stolen, about the Stolen Generations. Stolen premiered in 1998, followed by seven annual seasons in Melbourne, plus tours to Sydney, Adelaide, regional Victoria, Tasmania, the UK (twice), Hong Kong and Tokyo, and readings in Canada and New York. Harrison was the co-winner (with Dallas Winmar for Aliwa!) of the Kate Challis RAKA Award for Stolen. Stolen is studied on the VCE English and NSW HSC syllabi. On a Park Bench was workshopped at Playbox and the Banff Playrites Colony, and was a finalist in the Lake Macquarie Drama Prize. Rainbow's End premiered in 2005 at the Melbourne Museum and toured to Mooroopna, and will tour to Japan in 2007. Harrison was the 2006 Theatrelab Indigenous Award winner for her play, Blakvelvet. She contributed one chapter to Many Voices, Reflections on experiences of Indigenous child separation, published by the National Library, Canberra. Her most important creation has been her two daughters. --This text refers to an alternate kindle_edition edition.