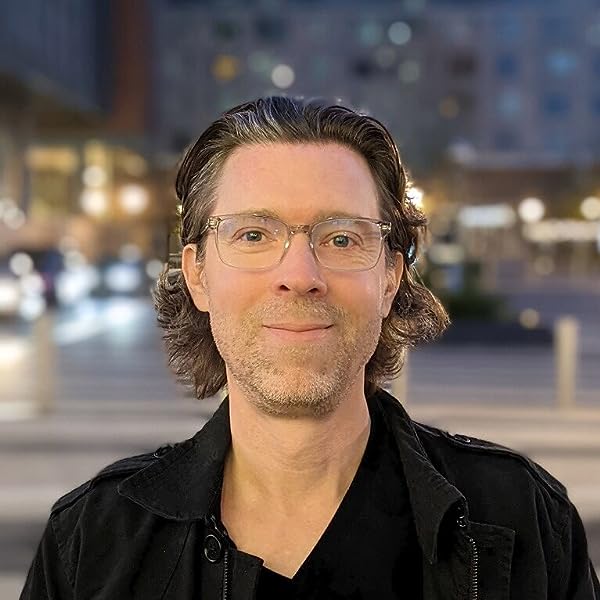 by Christian Cantrell (Author)
3.9 out of 5 stars 951 ratings
See all formats and editions
Sorry, there was a problem loading this page. Try again.

Page 1 of 1 Start overPage 1 of 1
Previous page
Next page
Start reading Containment (Children of Occam) on your Kindle in under a minute.

Christian Cantrell is a writer and software developer living in Northern Virginia. You can find him on Twitter (@cantrell) or learn more about him at https://christiancantrell.com.

3.9 out of 5 stars
3.9 out of 5
951 global ratings
How are ratings calculated?
To calculate the overall star rating and percentage breakdown by star, we don’t use a simple average. Instead, our system considers things like how recent a review is and if the reviewer bought the item on Amazon. It also analyses reviews to verify trustworthiness.

Issa Khalil
5.0 out of 5 stars Amazing
Reviewed in Australia on 30 August 2021
Verified Purchase
This is a very deep read the author has spared no effort to make this novel scientifically sound and accurate along with a good story line that keeps evolving and gives you the unexpected
Highly recommended
Read more
Helpful
Report abuse

Earl Stevens
5.0 out of 5 stars The best lie contains the most truth
Reviewed in Australia on 20 June 2015
Well written story which goes to the heart of what we believe. Excellent sci fi and integration with our ever present apocalyptic fears. Totally recommended.
Read more
2 people found this helpful
Helpful
Report abuse
See all reviews

Jodi
3.0 out of 5 stars An intriguing concept
Reviewed in the United Kingdom on 15 January 2018
Verified Purchase
This is definitely a story born of the current period in time; environmental collapse, technology exceeding our comprehension and the idea of branching out into the solar system. All very good and fertile material for a story but despite the setting, the time spent fleshing out the key characters and attempts at making me care about and for the characters I am left feeling distinctly disinterested in what Arik did, said and responded to.

There seemed very little life to Arik or any of the other characters, perhaps because Arik himself lacks any apparent empathy and despite his meticulous planning and forethought to most aspects of his life, the ultimate chain of events he sets in motion are starkly different due to the absolute lack of forethought. I don't wish this to be a spoiler review so I'll say no more.
Read more
2 people found this helpful
Report abuse

Crazy Jamie
4.0 out of 5 stars A Pleasant Surprise
Reviewed in the United Kingdom on 8 January 2012
Verified Purchase
Containment is the second book that I bought for mere pence from the Kindle store. The description of the book sounded interesting enough, so I thought I'd give it a go. The sci-fi genre has no shortage of stories like this, and whilst the setting of Containment can't be called generic, equally it doesn't tread new ground for the genre either. However, Cantrell does an excellent job of building up an image of the colony and engaging the reader with the plight of the colonists. The main focus of the book is Arik himself, but the peripheral characters are detailed just enough to give a sense of the society and culture that exists within the colony.

The plot itself progresses at a decent enough pace, with Cantrell cleverly jumping between different time periods to the reader interested and engaged. There is some sense of mystery and tension from the outset, and this is maintained until the plot becomes more hard hitting later on.

The book isn't perfect. Cantrell favours significant passages where he describes science and technology, and whilst this fits in well in the initial portions of the book, I felt it was over used towards the end, to the point where the pace of the final 10% or so of the book felt a bit laboured, albeit the ending itself was satisfying enough.

Overall though this is well worth a read for fans of the genre, and may even ensnare the odd newcomer. I was debating with myself whether to award this three or four stars, and I think ultimately I would have given it three and a half if I could. But the well constructed setting and largely engaging plot makes it worth rounding up for me, so four stars it is.
Read more
One person found this helpful
Report abuse

Yvonne N
3.0 out of 5 stars Pacy in places and held my attention to the end
Reviewed in the United Kingdom on 3 February 2013
Verified Purchase
In general I thought this was a good sci-fi read. There was a good interesting story line and there was an unsolved mystery that was there from the start. All the right buttons were pressed at the beginning and indeed in a lot of places this mystery and pace was kept going well. Sadly the reason I haven't given in four or even five stars is for two main reasons. The first being that in places there is way too much techno babble and unless the reader has a scientific background, then all this serves to do is to slow the pace too much, cause the reader to yawn and the skimming starts. The other reason is that I felt that the real twist and what in my opinion should have been the ending, comes about two thirds of the way through the book and what happens after that is a bit of an anticlimax,as the reader is expecting another twist and revelation here. Also I felt the ending was somewhat ambiguous and needed further elaboration. Actually the same could be said about other areas of the book as I think another reviewer has already pointed out that although the techno stuff is over elaborated in places, some of the other parts of the story line aren't really elaborated on quite enough. I will probably read the sequel though if I like the look of the sample.
Read more
One person found this helpful
Report abuse

Shaun H
5.0 out of 5 stars A very rewarding read.
Reviewed in the United Kingdom on 1 February 2011
Verified Purchase
I read my first ever Christian Cantrell story a couple of days ago and liked it so much that I immediately bought Containment.

Containment is a very clever full length novel. Set the near/medium term future the story has as much an eco-thriller feel to it as it does pure science fiction.

The story is told in several interleaved sub-stories describing a very detailed and believable future-history of Earth, and the life of Arik, a young man of the first generation born at the Venus V1 colony both before and after recovering from a serious brain injury.

There is a lot of depth to this story and on the Kindle there are the most "Popular Highlights" of any Kindle book I have read so far. Of course you can turn off highlighting if you find these distracting. Personally I found that in this book at least, they really got me thinking.

Although the story is multi-threaded and covers some pretty complex subject matter, it really is very easy to read and I found myself speeding through the pages looking forward to the next little plot development or nugget of wisdom that the author had in store. Several twists and turns keep you guessing all the way through and the ending was particularly well done, being touching without being over-dramatic or clichéd.

Once again, as with the last Christian Cantrell book I read, formatting and presentation on the Kindle are absolutely first class.

Overall - An unusual and rewarding story that is worth nothing less than 5 stars.
Read more
Report abuse

Super Dale
3.0 out of 5 stars Enjoyable sci-fi, up to a point...
Reviewed in the United Kingdom on 4 January 2015
Verified Purchase
To be clear, I did get this as part of a promotion and did not pay for it. This therefore is purely a review of the quality of the novel as I found it.

I enjoyed the novel- as fairly 'hard' sci fi it works quite well. Be warned there is a lot of info dumping, but this serves the plot which is fairly ingenious for most of the book but does veer into a well worn area towards the end- difficult to explain more without revealing the plot itself. And actually, I found myself wishing there was a sequel. However, the characterisation is not good. We are given little to work with- even the main characters are fairly two dimensional and the minor characters are virtually indistinguishable.
Read more
Report abuse
See all reviews
Back to top
Get to Know Us
Make Money with Us
Let Us Help You
And don't forget:
© 1996-2022, Amazon.com, Inc. or its affiliates